Uncovering the mystery of some postcards, a blacksmith, and the Bowning pub 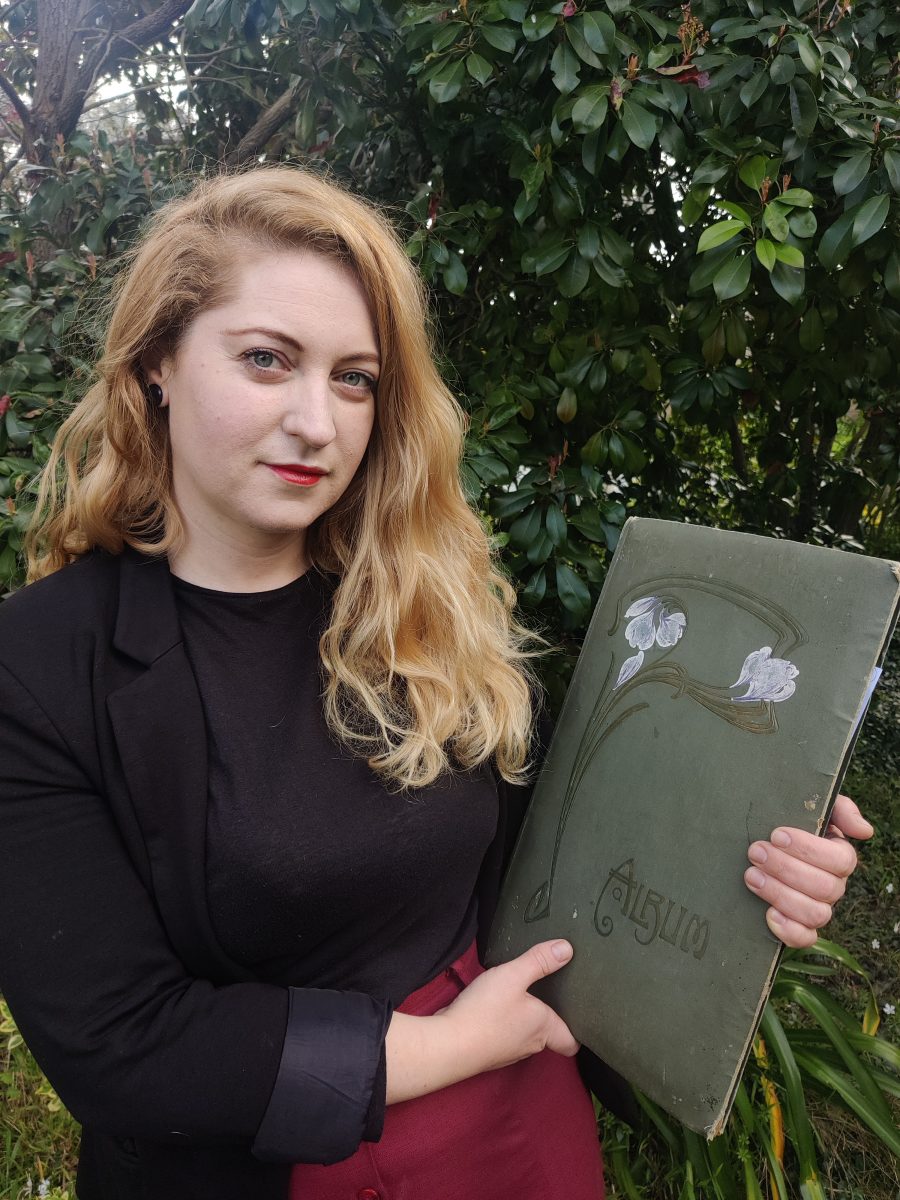 Gabrielle Affleck with the album she found at Vinnies Belconnen – a piece of history she’d like to return to the rightful family. Photo: Steven Kierath.

It was sitting on the counter at the Belconnen Vinnies – an old photograph album, so beautiful, thought Gabrielle Affleck, that it should be in a museum.

The Canberra public servant was waiting to pay at the op shop counter when she spotted the album, initially thinking it was part of a display.

“I really didn’t think something like that would be for sale,” she said. “It was so beautiful.”

The next thing she knew Gabrielle had bought it for $50, taken it home, and had started to leaf through its pages. 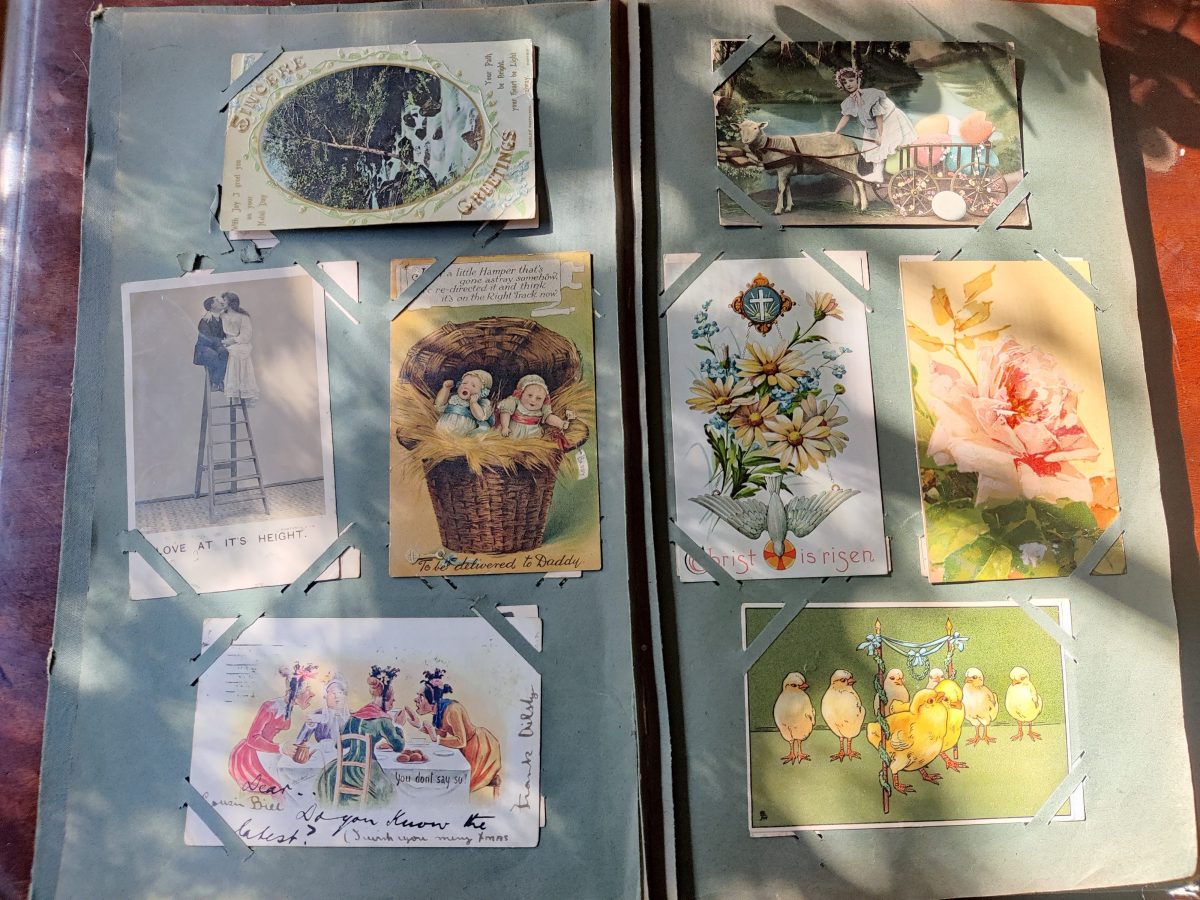 A selection of cards and photographs from the album. Photo: Gabrielle Affleck.

It was to be the start of a magical mystery tour that she now hopes will have a happy ending when the treasure is reunited with descendants of its original owner, whoever they might be.

What Gabrielle uncovered was an album of postcards, seemingly the life, times and work of one Alf Saunders (or Sanders), believed to be a blacksmith.

Through the postcards, writing and other details, he can be connected to the British Army, Clovelly (NSW) and North Devon in the United Kingdom with postmarks on the cards ranging from 1908 to 1911.

To add more to the puzzle, there’s also a local connection with the only Australian postmark uncovered to be that of Yass, via a card addressed to Mr A Sanders at the Bowning Hotel.

“After looking through this album, and all the history it contains, it’s really important for me to try to return it to his family,” Gabrielle said. “That’s why I’m calling out for help. It it is too important not to try to find out more about him and to see if he still has family left so I can get it back to them.

“It’s the story of one man’s life. Maybe not the most earth-shattering of lives but his life nonetheless. He clearly had a family and thought enough of them to write to them and collect photos in the album.” 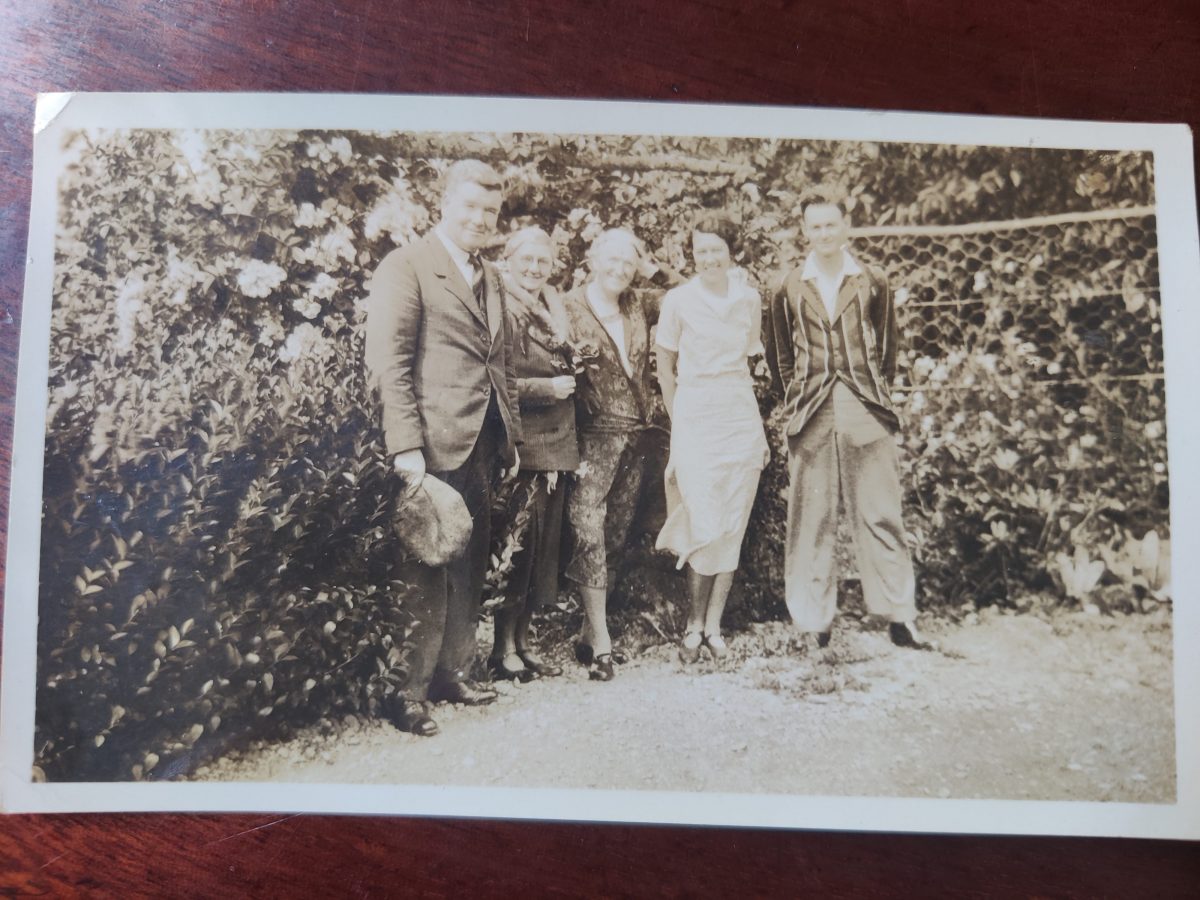 This photo shows a jolly group, circa 1900s. Can you recognise anyone? Photo: Gabrielle Affleck.

Of great concern, she said, was a post-it note attached to the album, listing how much each of the postcards might be worth as if someone were pricing them for individual sale.

“But I’d hate to see that, it is such a beautiful album as it is. I’d hate to see it broken up. I can’t imagine what the sentimental value would be for descendants of his family.

Gabrielle said that after she had taken the album home, she’d become “a bit of a historical detective” going through what she estimated to be about 80 postcards.

She said she was keen to find out if any ancestors of Alf Saunders/Sanders of Yass, circa 1910, were still around today.

“Maybe the album was part of an estate sale, and when they weren’t sold, they were donated to Vinnies,” she said. “It boggles the mind that no-one would want these. There must be someone out there [besides me] for whom these are special.

“Here’s hoping there’s a detective or two amongst us.” 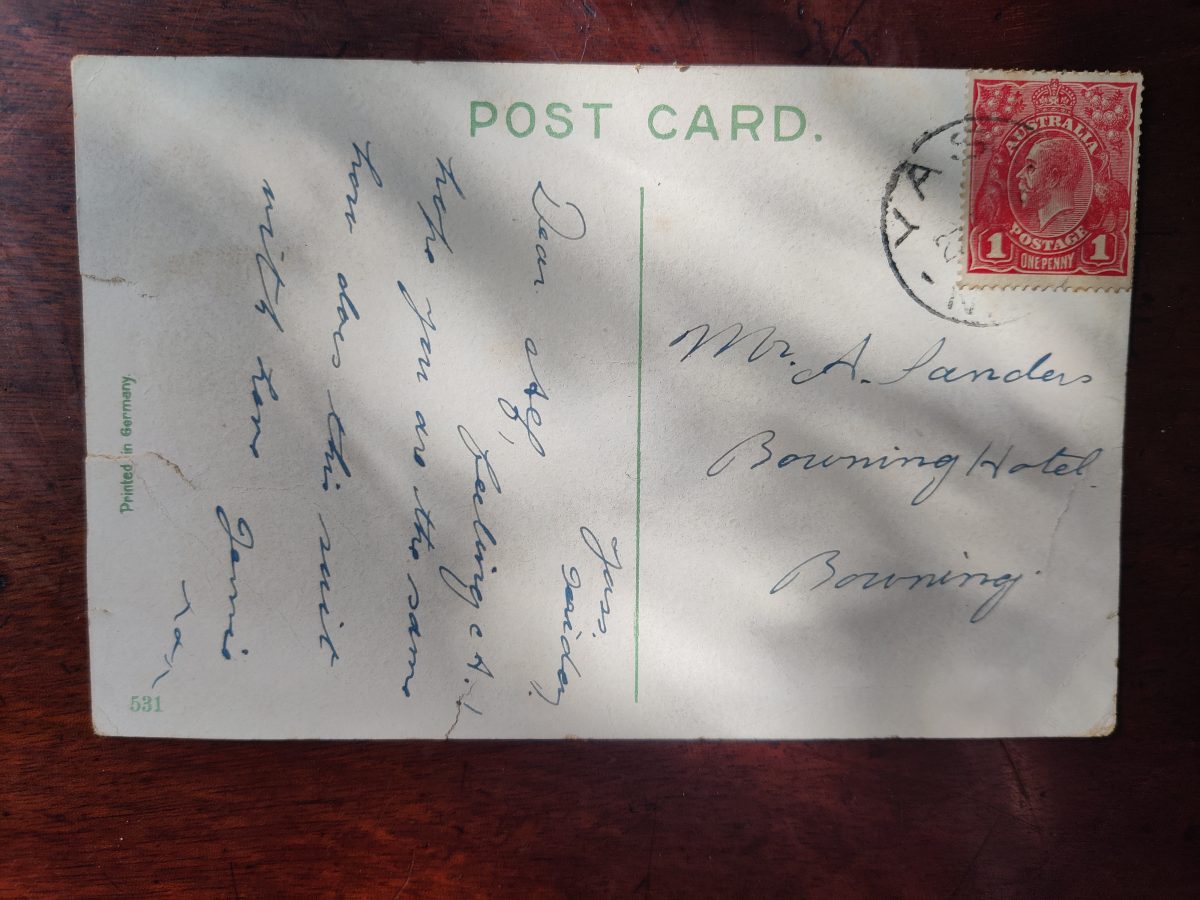 The only postcard in the album featuring an Australian stamp – sent to Mr Sanders who was staying at the Bowning Hotel at the time. It’s postmarked Yass, but no date is visible. Photo: Gabrielle Affleck.

She has started to check the Yass connection, as the only Australian postage stamp is the one addressed to him at the nearby Bowning Hotel, but the date is obscured. She knows he wasn’t the publican, as there’s no evidence of that, but thinks he might have been a guest.

Interestingly, the postcard came from someone called Jamie in Yass. Some of the later postcards refer to his wife, Jamie, so perhaps this is where they met, but those other cards were sent to him at an address in the UK.

READ ALSO The mystery of the girl beneath the floorboards

There’s another Jamie connection in later correspondence with his sisters, who ask about her.

“We know back in those days that people used postcards to communicate all the time, probably just like we use text messages today. It wasn’t grand, sweeping text, rather just the banality of everyday life … you know the sort of thing, who they met on the train, mum’s sick.”

But that’s why this album is so important, according to Gabrielle, because rarely is real life recorded so objectively like it is through this sort of correspondence.

If you can help shed some light on Alf Saunders/Sanders, his family, time in Yass, anything that can help Gabrielle return the album to its rightful owners, email shopman@region.com.au and we’ll pass on the information to her.

I wish you good luck finding a family member for this,i too had something simular happen to me i worked at then revolve mugga way many years ago now,we had a large box of paper work,birth cerificate,drivers licence,letters to his mother it was from 1948 there was this mans whole life in there.i thought who would throw this away,i became obsessed in finding one of his family members to take it,to no avail.In the end i ended up giving it to vinnies,good luck.

Alfred Sanders was born in Fremington Devon in 1882 and migrated to Australia in 1914. He married Jane Elizabeth Wallace in Yass in 1916. They lived for much of their married lives at Greenethorpe near Grenfell, NSW. Alfred died there in 1959, and Jane died in Strathfield in 1972. They did not have children. Alfred had a sister Emily (1879-1967) who migrated to Saskatchawan Canada. She married James Welch (1878-1059). There were descendants. Plainly, they are well removed from Alfred’s life in Australia. (Acknowledgement: Research by Gary Kent and Tony Maple.) 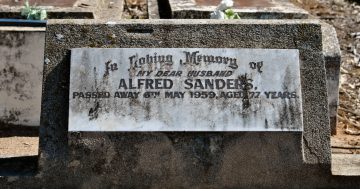