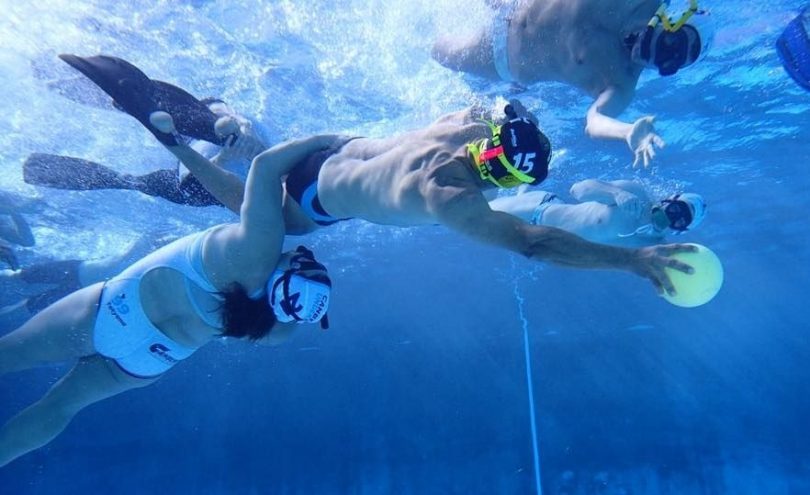 One of Canberra’s most experienced underwater rugby players, Louis Hoskinson, has been playing for ten years. Photos: Supplied.

Do you think playing rugby is difficult and strenuous? How about trying to play rugby while holding your breath, wearing flippers, a snorkel and cap while under water? Welcome to the little-known sport of underwater rugby.

The unique aquatic sport was invented in Germany in the late 1960s but it was another 50 years before it reached Australian shores. The sport is growing in popularity in Canberra and across the country, which isn’t too hard to understand when it has been likened to wrestling in space and Quidditch underwater.

The concept is simple: each team has six players and their task is to dunk the ball — filled with saltwater — in the opposing side’s basket. The hard part is the sport takes place at the bottom of a five-meter diving pool.

One of Canberra’s most experienced players Louis Hoskinson has been playing underwater rugby for ten years after he discovered the sport while studying at UNSW.

“I saw a flyer posted in my university with the horsehair tear offs along the bottom, so I grabbed the number from it and gave it a ring and I spoke to Celene Steinfield, the founder of underwater rugby in Australia,” he recalled.

Steinfield first heard about underwater rugby when she was on exchange in Sweden in 2004 and three years later she brought the game and a couple of three-kilo heavy balls back to Australia and formed the first team at UNSW.

When Hoskinson first started playing the sport, he realised he found the perfect sport for him.

“I honestly thought that this sport had been designed for me,” he said. “I was a swimmer previously and I knew my strength was kicking. Underwater rugby is largely about kicking because you are using arms for other things besides swim strokes and because players wear fins, all the power comes from your legs.”

From the surface of the pool, the sport looks chaotic and frantic, with a jumble of bodies wearing fins and snorkels kicking the water wildly as they swim after the ball and tackle each another. 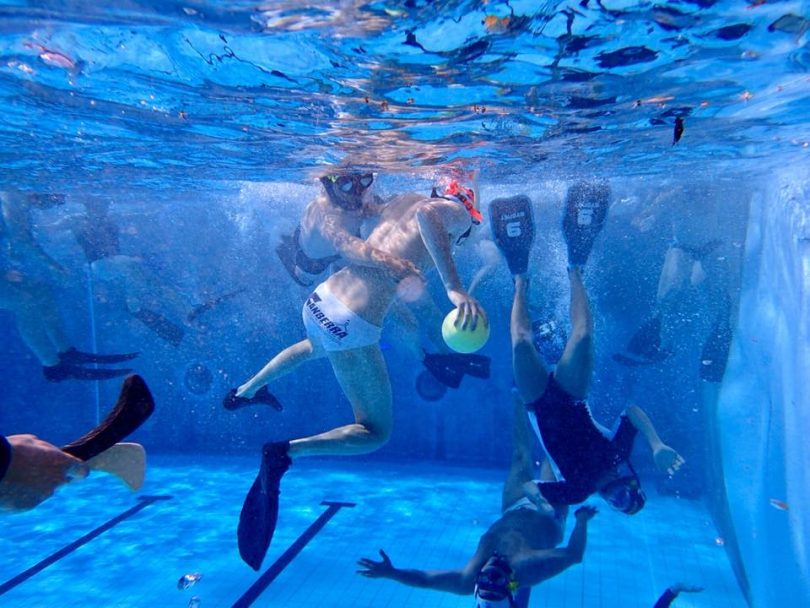 Hoskinson’s position is a goalie, which requires him to swim at the bottom of the pool and protect his basket from the other team. To do this, he lies across the basket “like a plug in the sink”, with his back facing down. Opposition players have to wrestle and push him off his goal to score. Due to the sport’s frenetic pace, players only remain underwater for around 10-20 seconds thanks to a buddy system which is put in place to make sure players can come up for air and swap positions with a teammate.

The sport found its way to the pools of Canberra in 2012 thanks to Bobby Chen. As one can imagine, it takes a little convincing to get people in the pool to play.

“The sport sounds like its unapproachable but it really isn’t,” Hoskinson said. “Bobby is excellent in convincing people to get in and give it a go. He is a charming guy and he has been an amazing ambassador for the sport.

“We are always looking for more people because the more players we have, the more teams we can send away to each state competition. Sometimes it is hard to find 20-24 people who are available to travel to Adelaide for a weekend.”

Hoskinson has represented his country at the Underwater Rugby World Cup and with the next international competition at the end of next year, Team Australia is looking to take a male and female team to challenge the world’s best.

“Even if there was someone starting now, they might be able to make the national squad in time for 2019, you never know,” Hoskinson said with a smile.

Canberra’s underwater rugby club, the Underdogs, train on Monday evenings at 7:30 pm at the AIS Aquatic Centre – they would love to welcome you to meet the players or even give underwater rugby a go yourself!

David Brown - 7 hours ago
Will he still be a candidate? Just not an endorsed Lib? View
Guy Manton - 10 hours ago
Andrew Duncan there was a debate, theres been thousands of ongoing debates about these kinds of issues. Canberra doesn't supp... View
Andrew Brien - 1 day ago
Canberra Liberals at their best. Apparently one was claiming get on Sportsbet they have great odds of the Liberal Party to Wi... View
News 25