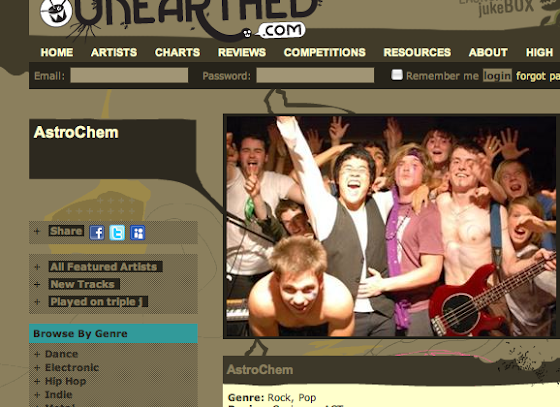 There are nearly 700 Canberra bands with tracks on the TripleJunearthed website. In 2011 we’re going to explore them.

Second off the rank, selected at random with my trusty THAC0 iphone app, is Astrochem who describe themselves thusly:

When the four elements of sound gathered in council, across the vast expanses of the cosmos- They fused their musical prowess, and formed a single consciousness. The pure soundwave energy released, gave birth to a universe, and thus: the Astro-Chemist was born.

So what is this band of young, vivacious and quite dashing squires all about- Whom iz dey? How did they get here and why? Who was it who said a picture is worth one BILLION words? Follow my voice as we venture into the dancing wheel of time, and take a trip into a day in the life of AstroChem

Another band with just two tracks up, with infuences like the Red Hot Chilli Peppers and Muse I’ll confess to being a tad nervous.

Pretty much exactly what you’d expect from a song with a title like this. A big meaty funk bassline dominates with what might be a j-pop keyboard thing playing around in the background.

Primus would have put it on an album without any hesitation, and there’s nothing to be ashamed of in the recording.

Having said that the multiple volume dropouts don’t really add anything to the sense of drama, but are really annoying.

The Muse influence is a lot stronger here.

The vocals are powerful, and the music is still fun.

The production and arrangement are really a step above a lot of local fare, and in the second half of the song it really rocks out.

Unfortunately they saw fit to open with a largely unnecessary flourish.

If you only book one band for a party these guys would work well. More just good clean fun than anything more serious.

You might not remember their songs in a week’s time, but you can have a lot of fun with them in the here and now.

Maybe they could come to the house, I’m attached to triple J and not doing Canberra things, rather than pool and hot 100.

thanks JB, they sound alright, does anybody know when, where they play in ACT or surrounds so we can see them live?

chewy14 - 5 hours ago
JC, Except you'll have South Tralee right next to Hume shortly as well and although we've got a border, you can bet those res... View
David Riddell - 5 hours ago
Can't imagine the waste would be transferred from Mugga as double handling makes no commerical sense. Crs could compete throu... View
Business 18

Rebecca Hosking - 6 hours ago
Jane Larkin Naomi Feuerherdt Kim Beaumont This is a bit sad 😥 Remember our team photos on the massive reams of paper 😊... View
Acton - 14 hours ago
A local paper that has a rabidly biased weekly column from a once amusing but now worn out journalist who intentionally and r... View
Tom Adam - 24 hours ago
*Riot-Act Rubs Hands *Canberra cries at the loss of the last printed journalism available as all other magazines and newslett... View
News 6

Sam Walker - 12 hours ago
Sean, we need to be smarter than that. People getting pissed off about the SFFP preferences are failing to understand that yo... View
Property 16

Sandra Wormald - 13 hours ago
Oh, so that is where the money from the tax payers went, which was meant for bush fire and flood relief ..... View
News 3

George Watling - 1 day ago
Will Andrew Barr's relentless war with nature never stop. 40,000 trees have been cut down and dozens of our green spaces have... View
News 44

Maria Greene - 1 day ago
Frank Valzano yeah but how would Brendan or pollies benefit? View
show more show less
*Results are based on activity within last 7 days

"For a restaurant that opened right in the middle of COVID-19 restrictions, we have felt the love," says manager Vidya,...
News 0

A cold air mass with at least two low-pressure systems embedded will cross the Great Australian Bight over the weekend...
Breaking 4

@The_RiotACT @The_RiotACT
Whether its fan dancing or respectful foraging that takes your fancy (or a live-streamed spectacular by Canberra super band Hands like Houses), the Where You Are hybrid festival has hope and happiness for everyone. Find out how you can get involved https://t.co/AdGgDR5rD9 (25 minutes ago)

@The_RiotACT @The_RiotACT
Meet Tom Falco, a Gungahlin sports clothing fan and entrepreneur who's used the lockdown to create a side hustle https://t.co/Gn8gVrlmjB (1 hour ago)

@The_RiotACT @The_RiotACT
Flights have officially resumed between Canberra and Brisbane. Four flights left the capital yesterday and two will leave today, but the early birds yesterday didn't quite get the reception they were expecting in Brisbane https://t.co/NFS2sdXCDq (2 hours ago)