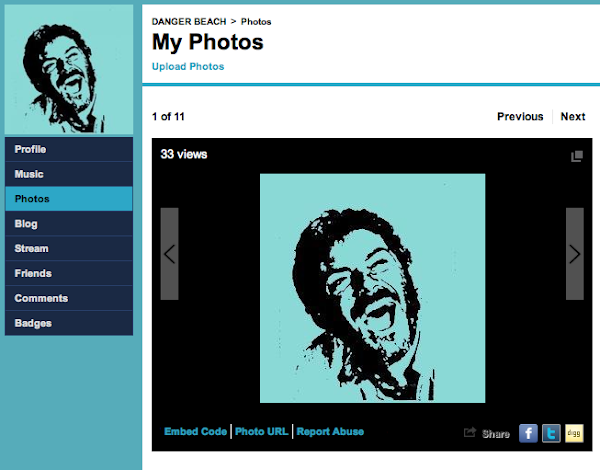 Unearthed Review hitting its stride again. Rather than choosing at random and being subjected to every lonely teen who thinks he’s the next Mike Skinner we’re going to work through the acts that have earned themselves a drum logo.

Today we’re having a listen to Danger Beach.

Danger beach doesn’t have much to say, but a fan on their Myspace offered an opinion which speaks volumes:

I love this album…I took some valium, drank some red wine and I’m relaxing in the most relaxing the easiest way possible [sic]

You don’t need the valium, listening to these tracks makes me feel wasted all on its own. I’m imagining the visualiser running on my computer even without turning it on.

This is very intricate, delicate music, with some rare, strange lyrics.

Highly recommended if you’re ever needing to run a chillout room. Notso hotso as a workout track and definitely not recommended for driving.