Unearthed Review: Hancock Basement. Three and a half stars 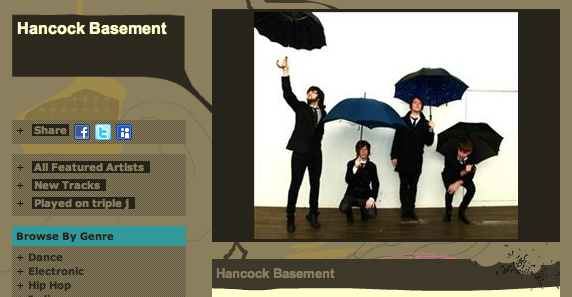 Unearthed Review rides forth once more.

Today we’re having a listen to Hancock Basement stalwarts of the Canberra music scene.

Hey describe themselves thusly at some length:

Performances in front of thousands at the Groovin’ the Moo festival and the national Make Poverty History concert, sold out shows in iconic interstate venues supporting some of the country’s best bands, a swag of new recordings and a debut video on the way – 2010 has been the culmination of a busy couple of years for Canberra indie-poppers Hancock Basement.

Formed on ANU campus and named after an infamous uni lovespot, the band spawned from a chance meeting of four very different minds (sample subjects: Archaeology, Design, Law) united by their outwardly cool record collections and closet love of pop music. The lads swiftly gained a reputation for their, ahem, spirited live shows and were soon opening for acts like the Presets, Cut Off Your Hands, Datarock, the Sleepy Jackson and Operator Please.

The group next decamped to Bigjesusburger Studios to record with Berkfinger (Philadelphia Grand Jury), Jorden Brebach (Dappled Cities) and Chris Townend (Silverchair,) and the resulting recordings saw them take out triple j’s Trackside Unearthed competition, with the track ‘Hey Kids’ added to rotation. A double A-side 7” vinyl ensued, and included the winning song and the glorious ‘Don Juan’ (which made it to the semi-finals of the International Songwriting competition).

The autobiographical ‘Oh, Todd’ followed shortly after, as did mammoth touring up and down the east coast of Australia taking in festivals and supports for bands including Bluejuice, Bertie Blackman, John Steel Singers and Wolf & Cub. Thanks to the band’s appearance on an ‘Artists to Watch’ compilation in the US, which featured the likes of rap renegade Kid Cudi, the tracks were added to multiple US college radio stations and blogs.

Knuckling down with hip-hop/RnB producer D’Opus (of D’Opus and Roshambo) and Ben Garden from electro masterminds Grafton Primary, Hancock Basement has been recording brand new material that takes a fresh look at its trademark big ‘n’ bouncy indie-pop sound. Keep your eyes peeled for the first taste, ‘One in a Million Does’, and the band’s accompanying debut music video (http://vimeo.com/14629255), as well as a live recording of the boys performing their blistering show at a packed Northcote Social Club in Melbourne.

HANCOCK BASEMENT has played festivals with the likes of VAMPIRE WEEKEND, EMPIRE OF THE SUN, SILVERCHAIR, CUT COPY, GOTYE and SPOON and have supported artists including THE PRESETS, BLUEJUICE, THE SLEEPY JACKSON, BERTIE BLACKMAN, WASHINGTON, OPERATOR PLEASE, DATAROCK, CUT OFF YOUR HANDS, THE SCARE, DIGITALISM, YOUTH GROUP, JOHN STEEL SINGERS, YOUNG & RESTLESS, THE BASICS, SOFT TIGERS and many more.

Hancock Basement are a great pop-rock band who, through considerable intelligence and hard work, have dragged themselves a great deal of the way to success.

But if you don’t know what they can do, and what they sound like live, then these three songs could be a disappointment.

They’re aiming for radio play, which is fair enough, but in the process seem to lose both their catchiness and appealing cheeky smarts.

*sigh* or maybe I just like the old stuff better than the new stuff.

Is it too early to accuse them of selling out?

Which is not to say this stuff isn’t good, just that there’s potential for more.

Jordan Amber - 7 minutes ago
Anthony Gordo the club has to diversify away from gambling based revenue business models and as part of the ACT Government re... View
Peter Morales - 3 hours ago
David Malcolm WTF should they View
Peter Morales - 3 hours ago
The kid's ain't got a chance to voice themselves against a drug and gambling organisation especially when their backed by loc... View
Community 3

May Mac - 2 hours ago
The only reason we switched to landfill nappies was the struggle to keep line dried reusables from stinking of woodsmoke in w... View
Phillipa Leggo - 4 hours ago
Well done Olga Imbriano - lovely article👏👏👏 View
Vickie Quinn - 6 hours ago
Sarah Quinn looks good I'll have to check it out! View
Property 14

Ol L - 2 hours ago
NOVEMBER 11 2019 - 12:01AM Canberra is home to the biggest houses but the smallest units, new report shows... View
chewy14 - 4 hours ago
Capital Retro, The median price for apartments and townhouses is significantly less than for detached dwellings. So if the pr... View
News 1