Unearthed Review: Robert James. Four and a Half stars 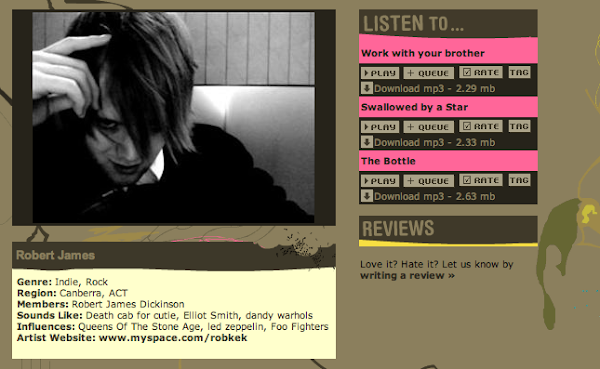 Today’s random selection is Robert James who says of himself:

Hey guys, My name is Robert James, I am a very amateur musician, I have been playing music since 2005-06, My first song ever was “Swallowed by a Star” which started as a 30second audio clip and progressed into a full song, this song was the basis of me making more music. Lately though I have been enjoying music making alot more so I decided to let other people hear it, I hope you enjoy, I record my songs using my laptop mic, so that is why they have some bad static and do not sound that great.

Floppy haired kids claiming to be “very amateur” strike fear into the hearts of any reviewer.

So you can imagine what an amazing unfolding revelation Robert James’ three beautiful tracks on the unearthed website were.

Take the melodic parts of Nirvana (at least from Teen Spirit on), mix in a big splash of The Shins and you’ve got some pop bliss by Robert James.

Sure he’s angsty. But it’s the angst of beauty and vulnerability, not just undirected rage.

I’m torn on giving this five stars, but with the lyrics so front and centre there are just a couple of cheesy rhymes which distract from what he’s trying to do.

Lucy Webb - 43 seconds ago
Tim Webb we have to take Hen and Lex! View
Kaylene Wilkinson - 18 minutes ago
Michelle, I agree, it would be hard to beat yours, but we will have to still check them out. View
Michelle Stan - 23 minutes ago
Sounds great Greg! 😁 View
News 13

Jonathan Nicholl - 32 minutes ago
Andrew Dale I work in a private business and now work mainly from home. Depends on the job I reckon View
chewy14 - 43 minutes ago
Wow, For a party that is apparently against systemic discrimination, they sure do propose a lot of it.... View
Steven Campbell - 49 minutes ago
If we lump all the actual work that get done by a public servant in a week. A one day work week will suffice. View
News 2

paulmuster - 1 hour ago
I had a good chat with him at the local shops while he was out campaigning. His understanding of policy issues in the ACT was... View
News 47

Marcel Bond - 3 hours ago
I don't know what the answer is...hell, when it comes to drugs I'm not even sure what the question is. But one thing I do kno... View
ssek - 8 hours ago
Is this bloke serious? “There is no more stigma that you can put on someone than calling them a criminal for something that... View
News 3

HiddenDragon - 5 hours ago
Interesting summary - thank you. The release of the letters on Bastille Day is doubtless a complete coincidence......... View
Stephen Saunders - 6 hours ago
Though the Palace was in the plot up to their eyeballs, Elizabeth and Charles "weren't told" on the actual day. No wonder Cha... View
Sport 1

A troop of former Australian War Memorial officials opposed to its controversial $500 million redevelopment will line up before a...
News 47

The ACT Government's decision to give a Fyshwick recycling proponent the green light to lodge a development application has left...
Food & Wine 47

@The_RiotACT @The_RiotACT
Crepe-lovers of Canberra, get excited because a new café dedicated to churning out crepe perfection has landed in Braddon https://t.co/xrGcJ8A4QN (3 hours ago)

@The_RiotACT @The_RiotACT
The ACT Greens have put women at the centre of their gender-recovery COVID-plan, focussing on a four-day work week and more work-from-home opportunities in the ACT Public Service, as well as gender weighting in criteria for funding or contracts https://t.co/RIpCqj1Dmj (5 hours ago)