Unearthed Review: The Blaqk Year (aka Beyond December). Four and a half stars. 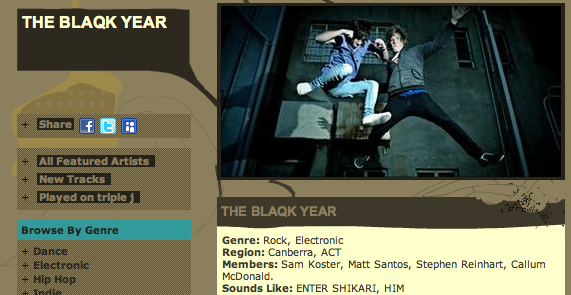 Moving on through the “drummed” artists we come to The Blacqk Year.

First of all, we ARE NOT a band that has just popped up and become popular out of nowhere, we’ve been going at it for years. We are a band that consist of 4 members, that are 15 years of age, and come from Canberra, Australia. Our passion for music, is indescribable, and has been since we were little. We have been working as a band since we were seven years old. We have a goal, to not just be another typical ‘come and go’ band that so often come about these days, no, we want to to make musical revolution, and that’s exactly what we’ll do. So, give us a chance, listen to a couple of our tracks, search around the internet a bit, get to know our story. We have alot videos on youtube.

Ummm, what the hell’s going on here?

The guys have the slickest myspace page in the known universe (complete with Bieberesque hair and Twilightish brooding). Apparently they have 31,000 Myspace friends (or everyone in the world still using Myspace) and over 5 million plays for their songs.

(Oh, and a name change to “Beyond December” has recently taken place)

But leaving all that aside the music is actually really very good.

They combine hard rock, punk and electronica effectively and had us pogoing around The Eagle’s Nest.

At times they really remind me of Rise Against, but I really like Rise Against so that’s no bad thing.

The recording, production, and musicianship is all excellent.

The only real questions are how did this come from here and where are they going to end up?

I really flirted with giving them the full five stars, but in the end there are just a few rough edges that only time can take off.

One Response to Unearthed Review: The Blaqk Year (aka Beyond December). Four and a half stars.
Filter
Showing only Website comments

Wow, pretty good for a 15YOs. I guess the autotune-turned-up-to-11 is a normal these days, but I don’t care for it..

Not hearing Rise Against in there but you like rock / electronica fusion – Pendulum + Kosheen are OK by you? Check out The Qemists – there’s some gold on both their albums. (Inc an appearance from one of The Blaqk Year’s favourite bands – Enter Shikari.)

David Jackson - 31 minutes ago
This is what happens when the loonies are running the asylum! Seriously it’s a correctional centre or prison. What a waste... View
Mark Huppert - 51 minutes ago
If elected, the Libs will still have to operate prisons, maintain roads, pay police, maintain hospitals etc etc. Plus they wa... View
Darcy Ryan - 52 minutes ago
Chairman Barr needs to go. View
Property 40

Jp Romano - 1 hour ago
Margaret Welsh move somewhere backwards. Apartments are the future. View
Margaret Welsh - 4 hours ago
Yes, and I'm not a Liberal voter these days. I hate the number of apartments. When we downsize we'll be moving out of the ACT... View
watto23 - 7 hours ago
So why can't the liberals provide a solution to this problem. They are very good at pointing out everything Labor does wrong,... View
Lifestyle 38

Jeremy Calero - 7 hours ago
Kaitlyn nothing will stop it lol View
O L - 9 hours ago
Wonder what that means for rental longer term? Probably go up after covid to match increase in housing values View
Community 12