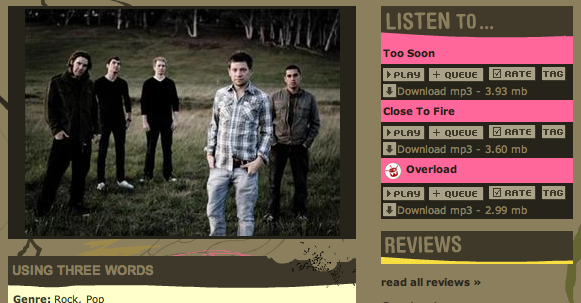 Moving on through the “drummed” artists we come to Using Three Words.

Using Three Words play a .”..smart sometimes technical take on punk, rock and the spaces in between…” – Drum Media May 2008

After this successful collaboration, Using Three Words again recruited Anton for the recording of their debut album in February 2008. The debut album is set for release in November 2008 along with a film clip for the lead single “Close To Fire“.

Since the release of their debut EP in 2006 Using Three Words have been receiving airplay on national Australian radio station Triple J. Using Three Words were named ‘Made In Canberra Band of the Month’ by Canberra radio station FM104.7 in June of 2006 to coincide with the release of their debut EP. The tracks “If it’s all the same” and “Forget” from the EP received high-rotation airplay throughout that month.

Lead single “Close To Fire” has also been selected for high-rotation on FM104.7 to coincide with the release of the debut album in November 2008 as well as college radio in Los Angeles and Milwaukee, USA.

Using Three Words were lucky to be named as a Top 10 rock category finalist as part of Australia’s premier music awards for independent artists, MusicOz in 2006 with the song “If it’s all the same”. That year also saw Using Three Words progress into the top 200 of the International Song Writing competition with that same song.

Throughout 2006 and 2007 Using Three Words songs were selected for use in a number of compilation albums as well as an Australian independent film soundtrack, ‘The Last Resort’ and also an Australian motorcycle stunt DVD, ‘Spontaneous Destruction‘.

Using Three Words have supported the likes of Helmet (USA), Shihad, Gyroscope, After The Fall, Dead Letter Circus, Evermore and The Screaming Jets as-well as headlining a number of successful shows locally and nationally.

The diversity in these supports and within their music along with the passion displayed in their live performances reinforces the fact that Using Three Words has a strong future in the Australian music scene.

Well there you go, Using Three Words are the band that get wheeled out when commercial radio is pretending to take an interest in local music.

The music is shiny and sparkly commercial rawk.

I wonder if, to take the next step, they don’t need to find a bit of swagger, maybe a sense of a smile behind the intensity and attention to detail.

But even without that they’re a fine tight rock outfit.