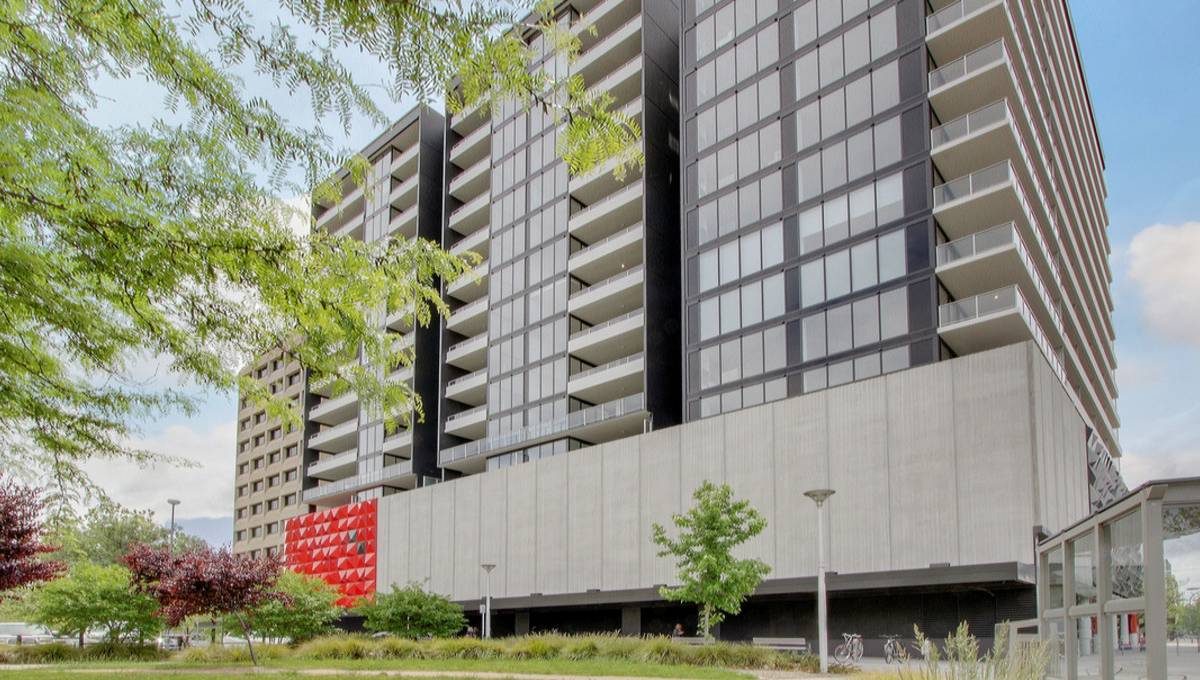 The Mayfair Apartments at 45 West Row in the city. Photo: Zango.

Developer Morris Property Group (MPG) has been ordered to pay more than $40,000 in damages to owners of units in a city apartment block for waterproofing defects, a common complaint in Canberra apartment developments.

Phillip and Pamela Nash, owners of unit 160 in the Mayfair Apartments on the corner of West Row and Alinga Street, and the executor of estate of the late Peter Mayoh, former owner of unit 176, took MPG to the ACT Administrative and Civil Tribunal over leaking balconies.

The Nashes and Mr Mayoh had bought apartments off the plan from MPG in 2016.

They claimed that the waterproofing of their respective balconies was not undertaken in a proper and workmanlike manner, a breach of their contract.

Mr and Mrs Nash also claimed that the waterproofing of the bathroom in their unit was defective.

MPG denied that any of the works were defective and described the amount of damages claimed as “grossly exaggerated”.

Mrs Nash first noticed moisture leaking from the balcony slab of unit 176 directly above about early October 2018, two years after the defects liability period had expired.

It had left calcium deposits, damaged the paintwork and stained the wall and balcony floor tiles.

The next month MPG defects manager Gordon Smith met Mr and Mrs Nash on site and told them the problem with the balcony of unit 176 would be rectified first and then the damage to their balcony would be repaired.

But months went by without anything being done until Mrs Nash emailed Mr Smith on 20 August 2019, who gave the name of the tiling company responsible for the balconies.

A week later he emailed Mrs Nash to arrange a time for an inspection to assess what work needed to be done.

Again, nothing happened for several months until 10 February 2020, when Saba Tiling emailed Mrs Nash to let her know that it would take three days or so to complete the painting of the balcony.

More emails followed over the next couple of weeks but still no work was done.

In the meantime, the tenant reported that the bathroom entry threshold floor angle had “blown out”.

More emails ensued with MPG but still no work was done.

On 29 June 2020, Mr Smith inspected the unit again with a tiler and a painter present and on 13 August 2020, the tenant reported to Mrs Nash that the tiles to the entrance to the bathroom had been replaced, something Mr Smith said later should not have happened, according to the tenant’s evidence.

The tenant also said Mr Smith explained to the workers what work they needed to do with the balcony and said one of them would text when a time was set to do the work.

But several months later the painting still had not been done and on 21 October 2020, Mr Smith emailed that “the engineer has recommended an epoxy resin be injected to the affected area prior to paint finish”.

As far as Mr and Mrs Nash were aware, this was never done.

Having heard nothing further from Mr Smith, who had gone on extended sick leave, or MPG, Mr and Mrs Nash arranged in early March 2021 for George Pudja, of Peak Consulting, to inspect the site and report on the situation.

Mr Pudja, a building consultant with 24 years’ experience, told ACAT the biggest problem with this balcony design was that there was no separation between units, as the membrane continues around the dividing walls, past the overflows to the next balcony.

“This presents as an enormous problem should one balcony be renovated, as there is no compliant way to isolate one balcony from another, terminate the membrane and maintain the overflow provisions,” he said.

“I think the most common problem that I’ve found by far is that products themselves, they rarely fail,” he said.

“It is the application and the installation of the products.”

The senior contracts administrator of MPG, Edgar Sharp, who has no waterproofing qualifications and does not hold a builder’s licence, responded to Mr Pudja’s report.

He disputed that the waterproofing membrane in both balconies needed to be replaced, said insufficient wet seal was the cause of the bathroom problem and took issue with Mr Pudja’s costings.

But Senior Member Michael Orlov rejected Mr Sharp’s evidence and found that both the waterproofing in the balconies and bathroom had not been undertaken in a proper and workmanlike manner.

It’s not as simple as some simple minds think.

The joys and expenses of living in an apartment. If they’re not built correctly, it’s up to the individual or body corporate to fight for repair and the developer/builders drag their heels. Perhaps the ACT government should with hold any future DA ‘S on other projects until such time as all warranty issues are addressed on deflect structures. That might solve the problem.

There are a few problems beginning to emerge with lift failures in some of the new multi story unit blocks. Some will have to be replaced at a cost of millions of dollars.