Experts in buying, selling & renting
Your property, your future
17 May 2021 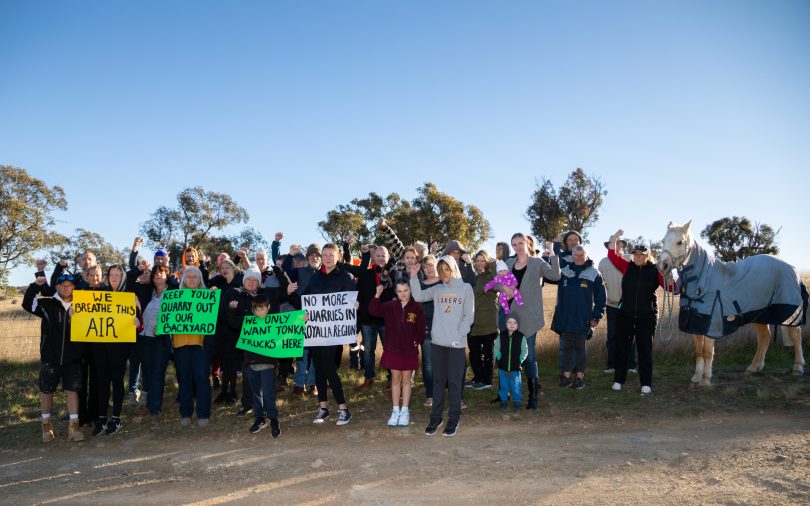 Royalla residents are up in arms about the proposed quarry. Photo: Michelle Kroll.

Royalla residents say the region’s fourth proposed quarry is not only unnecessary but also poses a health and environmental risk to anyone living within a 17 km radius.

Caroline Bradly, who lives in Royalla not far from the Williamsdale Quarry, knows first-hand the impact dust from a quarry can have on an individual’s health.

She was not diagnosed with asthma until she moved to her current location.

“I have had a number of health scares, and I do live in constant fear that this could develop into something more serious,” she said.

According to the Royalla Quarry Opposition‘s estimates, there are 18 schools within 17 km of the proposed site, and Tuggeranong suburbs like Calwell and Theodore are less than 2 km away.

“We want the community to understand that it’s not just people living in Royalla who are going to be affected, there’s actually a much broader reach,” Ms Bradly said.

Those who live closest will see, hear and feel the impacts of the quarry, she says, including the vibrations and noise from blasting.

Proposed routes for trucks are also of concern.

“The other option is these trucks travel along quiet cul-de-sacs in residential areas like Royalla and Googong,” she said.

However, what’s more of concern for Ms Bradly and others in the area is the dust which can contain silica.

Silica, she explained, has been likened to the new asbestos as it can cause respiratory issues.

“What’s particularly concerning is the main way that quarries control dust is through water. The companies have already said they won’t be trucking water in, but the only other option is to use the local supply, which is already under stress,” she explained.

In 2020, at the height of the drought, bores in the area were running dry and farmers couldn’t water their crops. 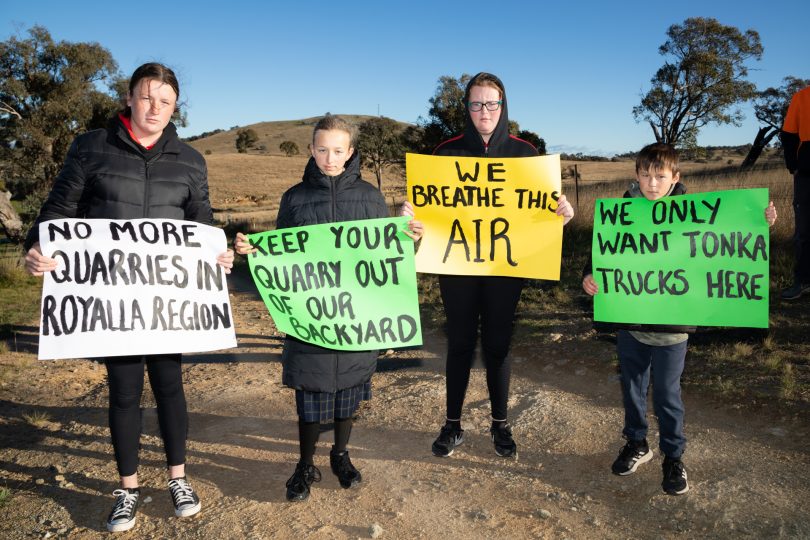 Royalla Quarry Opposition estimates there are 18 schools within 17 km of the proposed site. Photo: Michelle Kroll.

They’ve also pointed out that the quarry will be the fourth in the region (within a 10 km radius) and the others are not yet at 50 per cent capacity.

Ms Bradly said the group’s understanding is that these other quarries already have enough rock aggregate to service the region for the next 70 years.

“This is all about greed. There is no real need to have another quarry at all,” she added. 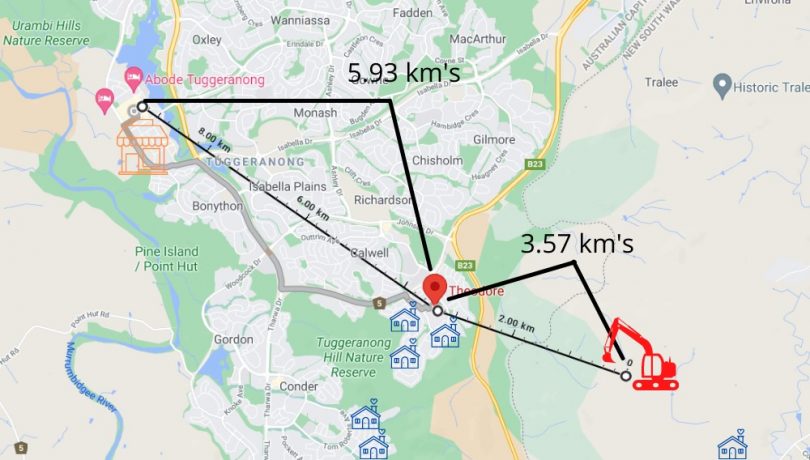 Residents say the quarry will be closer to Theodore than the Hyperdome. Image: Hayley Bennett.

Ms Bradly said the quarry is proposed in what is a unique environmental area – a box gum grassy woodland. Royalla is also home to several endangered or critically endangered species like the swift parrot and is likely to be put under stress by the quarry, explains the group.

The proposed quarry is a joint venture between Monaro Mix and Pacific Framework. The companies ran a community consultation on 17 April which residents say they were unprepared for as they weren’t given adequate warning.

“People didn’t get a lot of notice, and they were understandably angry and upset on the day,” Ms Bradly said. 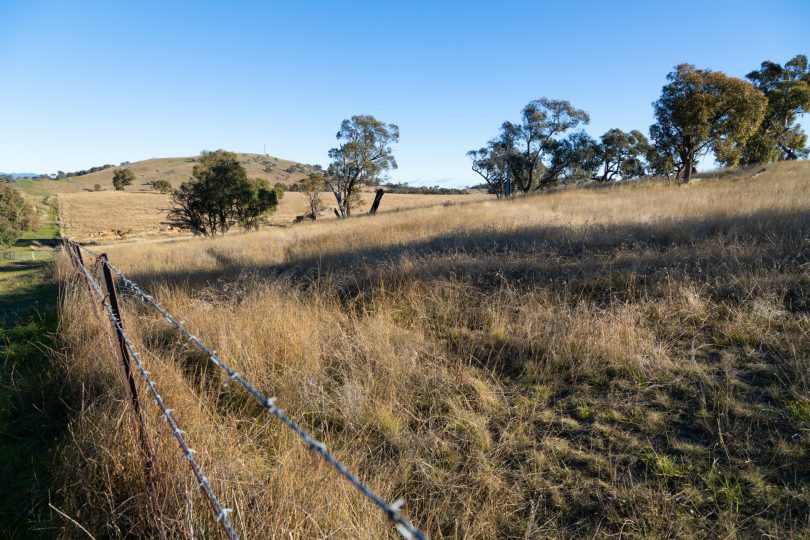 The proposed site for the Royalla quarry. Photo: Michelle Kroll.

The project’s principal environmental consultant Nick Warren from RW Corkery and Monaro Rock Group operations manager John Patterson both declined to comment on the concerns raised by residents at this stage.

A statement from Mr Patterson said that while Monaro Rock is listening to the feedback and concerns raised by the community, they will be unable to comment until the Environmental Impact Statement is complete and submitted to the NSW Government.

The quarry is still in the preliminary stages of planning.

Residents in the area say they have contacted NSW and ACT Ministers and believe both state governments and more local communities need to be involved.

The stuff coming out of the ground from Snowy 2 isn’t necessarily a substitute for high grade quarry rock and transporting it out would be a nightmare.

The residents of Conder and suburbs to the south should worry about this proposal as the standing inversion layer that plagues many suburbs across Canberra will trap nano particles of crushed rocks which will be transported to them when there are calm conditions or a light north easterly breeze is blowing.

The again, the EPA and Access Canberra are in denial that these conditions exist so it will be approved.

Capital Retro,
How many times do you need it explained to you that there is no “standing inversion layer” over Canberra?

If you repeat a lie many times, it doesnt make it true.

This is not a NIMBY issue as someone seems to think, but real health dangers which have been recognised. Like the plastics to oil proposal intended for Hume some time back, and like this matter, the government has allowed the purchase of the land to be developed without checking first that the proposal would not incur health penalties for those that live in Theodore, Calwell, Royalla and Googong. The responsibility for the deaths that will occur and the medical bills needs to rest and be attributed from the personal resources of those responsible, not the public purse. That way-state actors actually accept responsibility for allowing this type of development to proceed. And it should have happened in another way, not like this the cart before the horse where land is sold and then discovered there are going to be major health issues flow from the development.
Not good enough. History tells us we do not learn from history. Let’s not see a repeat of similar stories around our area.

Perhaps you can link to actual scientific research or investigations showing this particular proposal will cause health issues to residents?

Not anecdotes, not dissimilar examples from interstate or other countries. Actual evidence.

Nah, this is pure NIMBYism.

The people involved aren’t interested in research or evidence of the specifics of what’s being proposed. They don’t want to work with the proponents. They want it stopped and so their confirmation bias sees them attempt to latch onto any possible reasons that the proposal might not get approved.

So any NIMBY issue is just going to get an uncritical article now where they can claim whatever they want?

I heard that the quarry was on an ancient burial ground and would cause a zombie apocalypse. Why isn’t the government doing something to protect local residents? 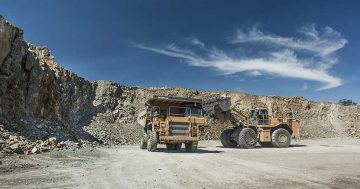