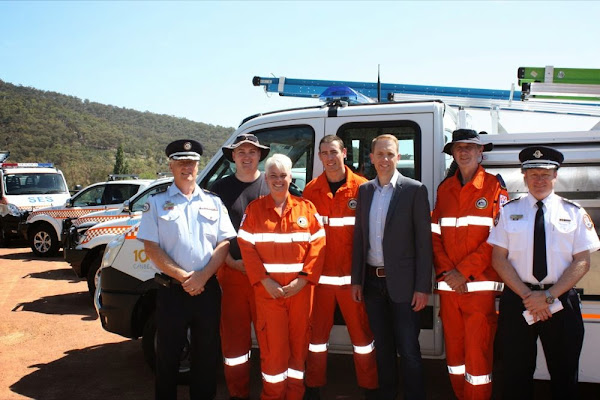 Minister for Police and Emergency Services, Simon Corbell, today handed over the keys to five new vehicles, fitted with the latest technical equipment to respond to a severe storm event, to the ACT State Emergency Service.

“The introduction of these new vehicles will greatly enhance the operational capability of the ACTSES,” Mr Corbell said.

“The Territory’s six field based SES Units can now each stand up two fully capable storm responseteams,” he said.

It is a timely Christmas present for the ACTSES as volunteers responded to 40 call outs for help on Christmas Eve last year.

Mr Corbell said the two Storm Response Iveco Trucks and three 4×4 Specialist Vehicles will be in use from today.

“Both vehicles have the latest in telecommunications equipment for computer aided dispatch and operational radio communications,” Mr Corbell said.

The five new vehicles represent more than half a million dollars investment in the ACTSES response capability.

The Storm Response Truck is equipped with a new tool box and has the capacity to store four chainsaws. It also has an increased pumping capability and hazard lighting.

2902 - 9 minutes ago
Imagine the money one could make building apartments on this site, right out the front of the proposed light rail track View
ChrisinTurner - 42 minutes ago
There is not enough attention to maintaining services in areas with dense populations. The government seems to be working on... View
JS9 - 2 hours ago
I assume there must be some form of contract that requires the pool to be maintained and provided to the community for a mini... View
News 4

Kathy Blunden - 28 minutes ago
I was also totally shocked with my electricity bill. It is the highest bill I have ever received and I have solar panels!!!... View
JS9 - 50 minutes ago
It is a weighted average across a range of plans - so it means some will go up more, some go up less. Over the basket of plan... View
phydeaux - 2 hours ago
I am surprised that the "11.95%" keeps being repeated without qualification. The following comparison uses data from "ACT Ele... View
News 12

Deborah Gale - 4 hours ago
Nada Krstin The vaccine gives protection and greatly reduce the likelihood of serious disease which is great. But children wh... View
Acton - 6 hours ago
We can’t hide from a virus and although vaccination mitigates the effect on yourself, it doesn’t stop you getting it, or... View
Peter Marshall - 7 hours ago
No Nada, that is not the point of the vaccines.... View
Courts & Crime 1

David Conrad - 6 hours ago
What is wrong with teaching cause and effect to kids? Or probability? So don’t fix it, just do what Canberra does best, put... View
Lifestyle 31

Katie Painter - 7 hours ago
But the fully Vaxxed rate is 93.3% in Eurobodalla, the second highest in NSW as of 25th Oct. And Bega Valley >95% first dose,... View
Monique Perry - 15 hours ago
Ilysha Perry not this article being recommended for me as if I'm not a local... View
Lifestyle 13

@the_riotact @The_RiotACT
Fancy staying in an #historic sandstone residence in the Southern Tablelands with 60 rooms to choose from and no worries about security? Berrima #jail is up for #sale and it's attracting plenty of attention https://t.co/o36Cqikf1E (1 hour ago)

@the_riotact @The_RiotACT
Police are investigating a break-in and vandalism at the Jillabenan Cave at #KosciuszkoNationalPark in which the 200-million-year-old wonder was damaged https://t.co/dJDC0BLkB5 (2 hours ago)

@the_riotact @The_RiotACT
Three quarters of public submissions as well as @QbnPalerang are in opposition to the current proposal for the new #Bungendore High School. Concerns include a loss of #parking and detection of #lead in the area https://t.co/YT6MpnIesg (3 hours ago)