Plans have been lodged for a major memorial to the Australian soldiers who were awarded the Victoria Cross in Afghanistan.

The memorial is proposed for Valour Park in Watson, which the ACT Government and the National Capital Authority upgraded in 2017.

Valour Park already contains the the Apex Memorial which commemorates the 76 Apexians who died in World War II, and the Junior Farmers Memorial, recognising young farmers who died in service to Australia.

Charitable organisation The Remembrance Driveway Council is behind the proposal, which is designed to enhance the experience of those visiting Valour Park by building on the presence of the existing memorials.

In 2019 the council ran a two-stage design competition for the development of a memorial to honour the four VC recipients from Afghanistan – Cameron Baird (deceased), Mark Donaldson, Daniel Keighran and Ben Roberts-Smith.

The panel, which included the father of Cameron Baird, selected Moir Landscape Architecture as the successful consultant to proceed to develop the design. 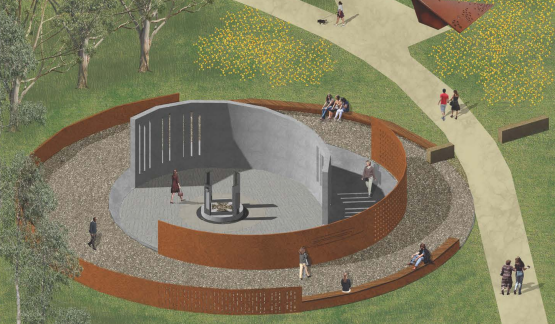 An aerial view of the memorial. Image: Moir Landscape Architecture.

The council’s Carolyn Tallents said Moir Landscaping’s entry got the nod for its poetic, peaceful response and organic form which offered containment and space for contemplation on an individual level but also enough room for small ceremonies.

It also contains a central, revealing piece as visitors walk into the memorial.

The DA says the concept builds on the symbolism of the Victoria Cross Medal, drawing from the laurel wreath and crown, and references Afghanistan.

Two round walls overlap to create a smaller intimate space and in the middle a tall central curved wall creates an enclosed space.

“This central high wall, symbolic of the bravery by these four men is a thick, strong concrete wall. The rough concrete textures and openings reference traditional earth architecture of the Afghanistan region,” it says. 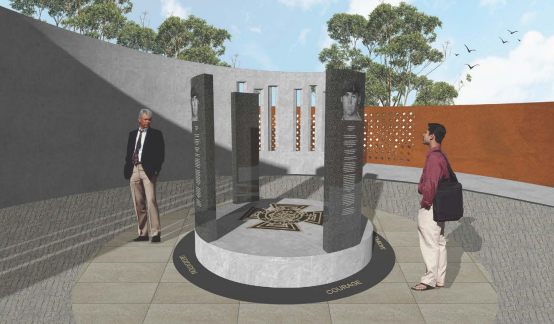 The centre of the memorial where the four VC recipients are shown. Image: Moir Landscape Architecture.

The memorial will be composed of granite, concrete and weathered, engraved steel, while a Victoria Cross plaque will be in bronze.

Ms Tallents said the council was in the early stages of fundraising for the project and has set a target of $500,000. The Australian War Memorial may provide some assistance.

DA approval will give the council two years to build the memorial, although it hopes to start construction in 12 months.

The council has been dedicating roadside rest areas between Sydney and Canberra to Australia’s World War II and Vietnam VC recipients since 1995 and decided a few years ago that living recipients would be recognised as well.

It has established 23 sites to-date, and a site has been picked to honour Keith Payne VC AM, although work cannot begin until the site has been redeveloped.

Don’t you have to be dead for a memorial?

I regularly walk and Run through Valour Park and often ponder the current state of the area as it is often overgrown with weeds and obviously in need of Care.
Valour Park is at the end of the VC rest stop trail on the highways from Sydney to Canberra.
Hopefully this project will see Valour Park get the care and recognition it deserves.

Maybe before we etectsuch a memorial, we’d better discover (through due, impartial legal process) whether one of these men is or is not guilty of one or more war crimes. Let’s not be previous – it’d be a bugger to have to chisel his name off it. And aren’t “memorials” for people who’ve died? Er …

Absolutely! It is incredibly important to be clear on the contributions of these people before any memorialising.

Isn’t one of these men the subject of a war crimes investigation by the Australian Federal Police?