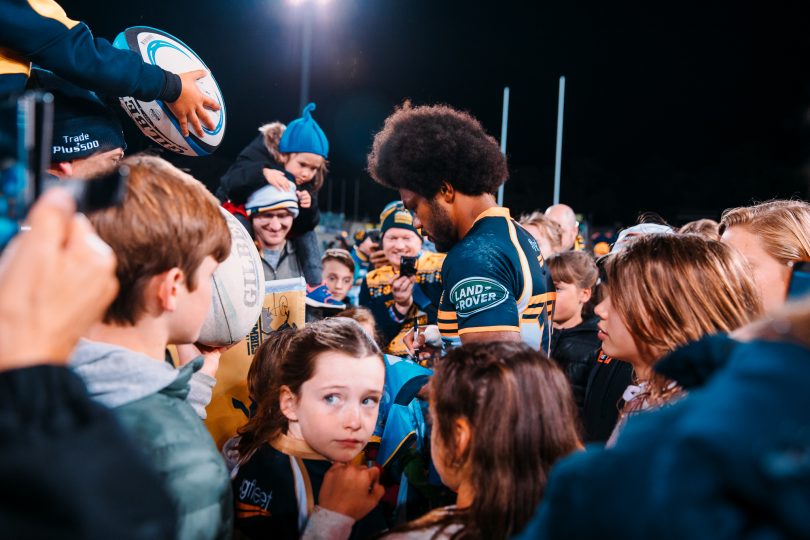 Consensus is often hard to find in sport, especially when it comes to rugby. However, one thing most agree on is the need for the Wallabies and Super Rugby teams to reconnect with the grassroots of rugby. The Vikings Group and the Brumbies have joined together to do what they can to put this into practice.

The Brumbies will host their opening trial of this pre-season against the Melbourne Rebels at Viking Park on Saturday 26 January. Gates open at 5:30 pm with kick-off set for 6:30 pm. The game will be played over three periods of 30 minutes. The trial will provide the opportunity to work on combinations and provide playing time for the majority of the squad.

Just as importantly, it’s a chance for Brumbies’ fans to get closer to the team.

Anthony Hill is the CEO of the Vikings Group and he and his organisation are doing whatever they can to promote, not just this game, but also the code in general. “Rugby is at the heart of what we do,” he says.

With this in mind, the Vikings Group and the Brumbies have worked to eliminate one of the barriers to families attending major sporting events; the cost.

“When the Brumbies approached us we were keen to work with them to bring rugby back to the grassroots. By making entry to the game free we can attract families to the game,” Mr Hill said.

Not only is entry free, but the access to the players will also be second to none with the crowd allowed onto the ground after the game to mingle with both teams. Anthony says he knows from experience with his own four children, including two rugby-mad boys, how important this contact can be.

To ensure it is a total family experience on Australia Day, there will be activities throughout the day, including thong throwing. There will also be jumping castles and a cool-down zone.

No Brumbies game would be complete without Brumby Jack. The sight of the mascot being chased by a hundred kids is a highlight.

Congratulations to the Vikings and the Brumbies for bringing the Super Rugby trial game back to the grassroots.

Vikings Group are offering five patrons $50 vouchers, redeemable for the day of the trial.

If you’d like to win one of five vouchers, tell us below who your favourite Canberran to play for the Brumbies is.

Enter your comment on the RiotACT site (not social media) and we’ll pick five winners and contact you via email by 4 pm on Thursday, 24 January.

Thank you all for entering. The prizes were won by Hayley R, Mark S, Samantha E, Dave H and Anthony D. We hope they had a fabulous time at the game.

Betty Geale - 6 minutes ago
What do you water them with .... View
Patricia Carnegie - 11 minutes ago
Canberra has has many trees what about spending this cash on Public houseing and homelessness View
Nanna Lola Apted - 2 hours ago
Who will look after them and keep them tidy. Who will prune them back when they overhang the roads and block drivers vision. View
Community 11

Steve Finch - 11 minutes ago
if you 'destroy' any animal for protecting its young, then it's you who needs to be destroyed. View
Pauline Bairnsfather - 20 minutes ago
Yes-once the babies are fledged, the territorial swooping will stop-they just need space and a bit of time.... View
Karin Attenborough - 25 minutes ago
I fed the Maggie couple everyday in the off season near my daughter’s school but they would attack me for months (not my da... View
News 14

Geoff White - 13 minutes ago
They should of used half for a restaurant would of been a beautiful view of the old bridge. And a good fishing spot. View
Peter Welch - 45 minutes ago
Clive John Trenton The original BB bridge was not that old anyway. I remember crossing the river there on a punt for motor ve... View
Clive John Trenton - 1 hour ago
Margaret Dzieciol that has genuine cultural value. A random old swing bridge in Batemans has no cultural significance. This i... View
News 26

Nick Smith - 37 minutes ago
Nada Krstin I'm not sure vaccines have been available for 18 months? All of these lockdowns may have been avoided if that was... View
Lifestyle 39

Heather Alexander - 38 minutes ago
LoveTulip Tops gardens, so glad you have posted these wonderful pictures. View
Teagan Brissett - 1 hour ago
Belinda Brissett better than nothing! View
Lyn Scougall - 2 hours ago
Margo Bellis you told us that, that’s why we went there 👍 View
News 38

Les BZ - 40 minutes ago
And will the government listen ? Of course not View
Susan Williams - 43 minutes ago
Canberra is too spread out for light rail to be effective. I'll still be using my car. ACT will never get the tram system Mel... View
Clive John Trenton - 1 hour ago
James Daniels my point is that, having decided to pursue the light rail, the decision has been made. Any further delays will... View
Property 15

whatwik - 2 hours ago
Ha, try NSW regional travel. Disappointing yes, but prudent. Some of us do wonder about the obsession with the ACT Chief Mini... View
Community 25

Capital Retro - 2 hours ago
The Australia Post vans deliver mail to them early in the day so that the postie bike person can use them as a suburban pick... View
Opinion 31

rspg - 2 hours ago
Bureaucracy at its worst with no concept of real world realities. When Manuka oval and st Christopher’s can’t be accessed... View
show more show less
*Results are based on activity within last 7 days

@The_RiotACT @The_RiotACT
ACT Attorney-General Shane Rattenbury has announced the appointment of a dedicated coroner in the Territory thanks to a $3.8 million budget boost. It's hoped the reform will reduce lengthy waits for grieving families, and has been welcomed by advocates https://t.co/viru0BQR0J (1 hour ago)