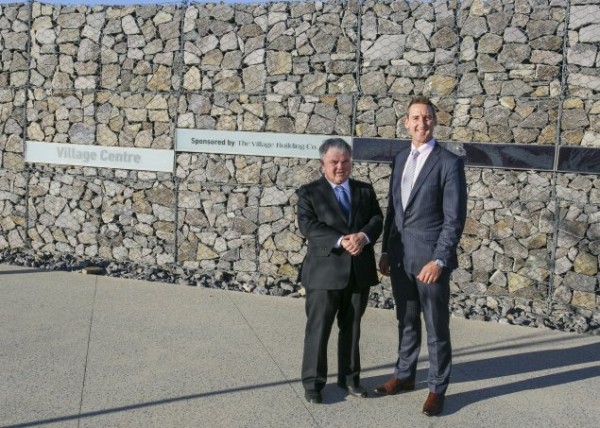 Village has been in operation for 28 years in Canberra. Mr Doherty, who takes over today, said Mr Winnel had been responsible for injecting affordable housing into the Canberra market and played a major role in the Master Builders Association in the 1980s and 1990s.

“Village Building Company, under the direction of Bob, was also responsible for contributing $1 million to establish the Village Centre at the National Arboretum. Bob has also been an Arboretum Board Member for a period, and Village has always been the major sponsor for Canberra’s annual Voices in the Forest event. Bob’s legacy of developments and creating Canberra communities is tremendous,” Mr Doherty continued.

Mr Winnel will remain on the company’s board as a non-executive director.

He first started the Village Building Co., then called MBA Land, as a cooperative of builders in 1988. As time went on, and the business moved in to the development of several major sites in a number of cities, it was renamed Village Building Company.

Early projects included the development of sites in the Tuggeranong Valley and the Golf Course Estate in Belconnen. Village Building Company has completed over 14,000 dwellings, sites houses and apartments, created the large South Jerrabomberra development, and also moved interstate with developments in Brisbane, Melbourne, Wollongong and Coffs Harbour.

“Village’s philosophy is to provide amenities such as parks, playgrounds, wetlands, bicycle tracks and sculptures into its developments, so as to provide as sense of community, and to provide affordable housing to the Canberra community. All while adhering to strong environmental ethics,” Mr Winnel said.

“Our contribution to the National Arboretum will stand as one of our major community contributions to the city in terms of a place that everyone can visit and enjoy. It shows off the natural attributes and the best points of planning of the city.”

Mr Doherty has served as Chief Operating Officer for the past year and says he aspires to honour, respect and leverage the company’s rich history, but also add to it the experience he has gathered working in large corporates both in Australia and abroad.

“We will leverage off all the hard work that Bob, the Board and the whole business have delivered in the past, and start to grow and enhance the long term thinking around getting the right level of diversification in our business across the Eastern Seaboard, the right geographical mix, the right product mix and making sure we’re setting ourselves up very efficiently but also delivering great returns to our shareholders and investors, and equally great experiences for our customers,” Mr Doherty said.

David Jenkins - 13 minutes ago
Road rules aren't the same as licencing 🤷‍♂️. Make up your mind which you're going to have a whinge about. Given hor... View
Claudio Neumann - 5 hours ago
Jesse Pricsina I feel these vibes very strongly. also get off my lawn darn kids with their scooters View
Michael Ilsley - 6 hours ago
I love scooters, fabulous! View
News 12

Chris Prentice - 2 hours ago
Matthew Soall But it is a business. View
James Vetos - 2 hours ago
A committed centre of learning excellence... Nope, a one trick business struggling under a poor business model. Should be ash... View
Liam O'Toole - 4 hours ago
Emphasis on international students. ANU is discovering the results of putting all your eggs in one basket. View
News 68

After-school milkshakes, scones and cakes. The Blue Moon Café in Canberra’s Civic Centre was a social hub in the city’s...
News 28