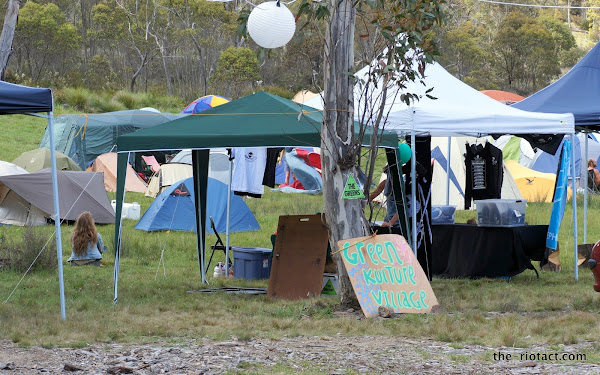 The Canberra Times has a story about the efforts of former GetUp! frontman Simon Sheik to transplant to Canberra and make a doomed tilt at Gary Humphries’ Senate seat for the Greens.

Opposing him is Kate Hamilton who has only recently moved back to Canberra after two decades in Sydney but can say she grew up here.

Interestingly in the article Simon makes much of his time at the Tuggeranong Community Festival on Saturday. He was certainly at Corinbank (more on that soon) for a lot of Saturday.

The above photo was the Greens contribution to the Green Culture Village at Corinbank which was staffed on Saturday (including Caroline Le Couteur) but was eerily empty on the Saturday.

We’ll know the result of the Green pre-selection on Friday.

so all those rumours about GetUp being just a front for the Greens turn out to be .. oh my lord .. true!

Soon after Senator Milne’s endorsement of Mr Sheikh, Ms Hamilton said: ”Parachuting in candidates will alienate members like it has in the major parties… I am surprised Mr Sheikh chose the Senate seat in Canberra as his next career goal. You know, Canberra voters don’t necessarily reward fly-in, fly-out lobbyists.”

Ms Hamilton served as a Greens member on Leichhardt Council in Sydney between 2004-2008. That sounds a bit “fly-in, fly-out” to me.

Soon after Senator Milne’s endorsement of Mr Sheikh, Ms Hamilton said: ”Parachuting in candidates will alienate members like it has in the major parties… I am surprised Mr Sheikh chose the Senate seat in Canberra as his next career goal. You know, Canberra voters don’t necessarily reward fly-in, fly-out lobbyists.”

Well, yes, but one could say the same thing about K Hamilton surely?

Not that it matters, the Greens have stunk up their chances.

Capital Retro - 14 hours ago
Double handling makes no commercial sense but the ACT government is worried about that. It is more likely that the waste we a... View
Maya123 - 14 hours ago
I have been in Canberra since way before 2008; 1974 in my case, and I always heard Fyshwick referred to as light industrial b... View
chewy14 - 17 hours ago
JC, Except you'll have South Tralee right next to Hume shortly as well and although we've got a border, you can bet those res... View
Business 19

@The_RiotACT @The_RiotACT
The owner of two distinctive office buildings in City West plans a $4.7 million revitalisation for the precinct, with the centrepiece being a new pedestrian plaza connecting them https://t.co/wJkzDPrrJl (24 minutes ago)