Wall to Wall Ride for Remembrance

The third annual ‘Wall to Wall Ride for Remembrance’ rolled into Canberra today (15 September, 2012) with over 1200 police officers riding in honour of fallen colleagues.

As part of the lead up to National Police Remembrance Day, Australian Federal Police (AFP) Commissioner Tony Negus is joining police from across Australia in paying special tribute to the services and sacrifices of law enforcement officers as part of the yearly event.

Across the nation, police forces have dedicated places of tribute, and Canberra police began today’s ride at the National Police Memorial to honour AFP officers who have been killed on duty.

The riders then rode through Canberra, their route taking them to the Goulburn Police Academy to join interstate riders.

The one kilometer long fleet of motorcycles then headed to the National Police Memorial for a joint remembrance service. 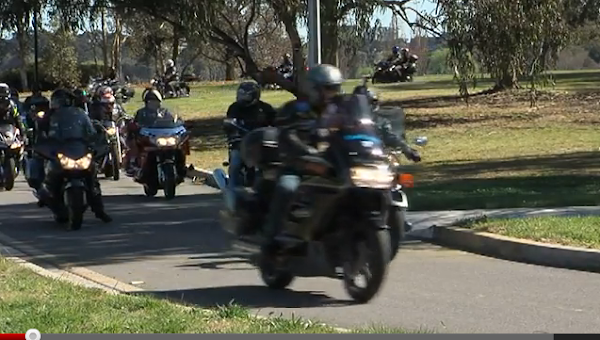 It was a great day and a good cause. It’s a shame that the video didn’t contain any shots showing just how large the contingent of motorcyclists was – about 1400, I believe.

Capital Retro - 11 hours ago
When I was younger I climbed to the top of Pidgeon House Mountain inland from Ulladulla and was amazed to find some Banksias... View
Karina Widjaja - 16 hours ago
Lyneham ... spotted 3 💛🖤 View
Suzanne Lloyd - 16 hours ago
They are regular visitors in Latham. View
News 46