Wanderer comes in from the cold 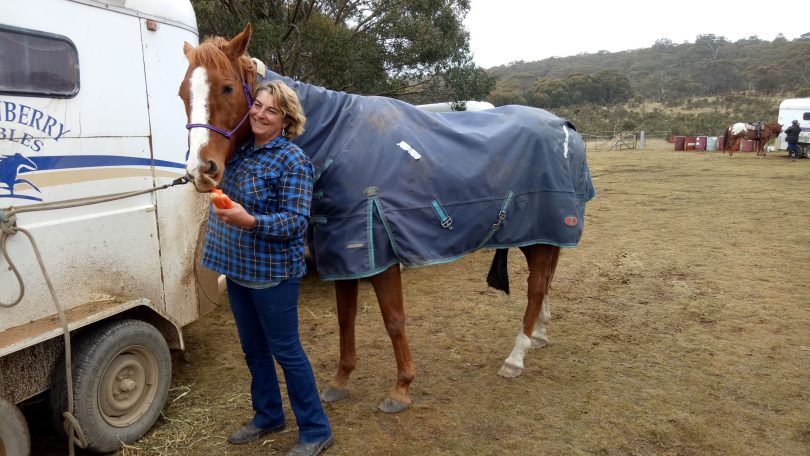 A story of loss and reunion in the high country has been playing out for three and a half months, ending with the heart-warming reunion this week between a woman and her horse.

Wanda Egan’s horse Rory escaped his yard from a camp in the Kosciusko National Park on 15 February after another horse had taken fright and run through the electric fence, quickly letting lose Rory and another seven horses. Three stayed in camp or were captured quickly, but four horses bolted off to the west.

Ghost Gully Camp Ground, in the High Plains area in Kosciuszko National Park, is a remote area near Yarrangobilly Caves to the south-west of Canberra.

Wanda was with the Illawarra ATHRA (Australian Trail Horse Riders Association) Club for its yearly February ride to the mountains.

Rory was sighted on the following day, then disappeared again. The chestnut gelding was last seen wearing a faded blue combo rug and a blue head stall.

Wanda is an experienced horsewoman from Nerriga, between Braidwood and Nowra, and she never gave up looking for him.

Sharing the information on social media, Wanda asked for people to share her search with friends who may visit the area, which is popular for riding, fishing and walking or just sightseeing. She knew Rory was still out there somewhere.

The following week Wanda organised riders and walkers to join her in the search. Some walkers came from interstate and riders from Sydney. The experienced riders assembled at the horse yards at Ghost Gully, Old Camp and Cooinbil for the search area between Bullocks Hill, Currango Plain and Old Currango.

Wanda advised the helpers that, “This is not a trail ride weekend. It’s for fit, shod horses. Experience in Snowy Mountain riding is advised as you’ll be doing some kilometres each day.”

A generous pilot from Cooma, Peter Davis, offered to start fly-overs. “The pilot took me for a flight to see what was visible from the air,” said Wanda. “But with no sightings before then it was too hard to know where to look first. He was seen over the next couple of days by myself and other riders, keeping up the search.”

Over coming weeks Rory was sighted several times in the area of Racecourse Creek and Chance Creek on Wild Horse Plain, still in the north of the Kosciusko National Park.

Wanda continued her push on social media as the search was getting desperate. Wanda was well aware that the National Park areas would be closed for the winter and the gates locked. Long Plain Road and Tantangara Road (beyond the dam wall) are closed from June to October long weekends.

Then on Saturday 2 June came the call that Wanda had been waiting three and a half months for. Two lady riders had found a horse with a blue rug not far from Currango Homestead. When they called him, he ran to them.

A jubilant Wanda and her husband Greg drove straight there to be reunited and take Rory home to Nerriga. 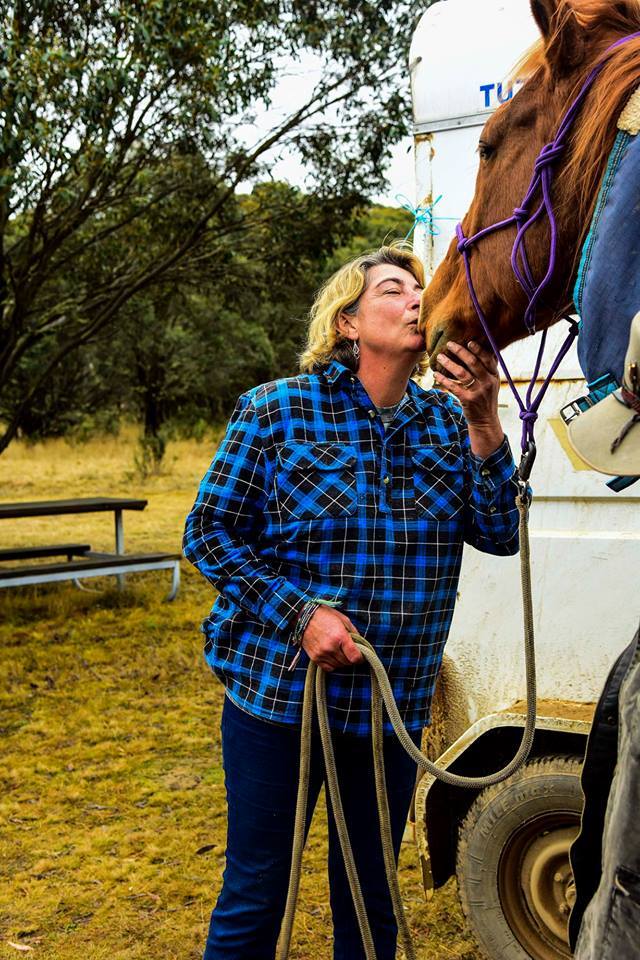 Amazingly, Rory’s rug had stayed on throughout his ordeal, as the weather started to get cold. Wanda was surprised that he hadn’t a mark on him although his condition was very poor.

“While I was overwhelmed with getting Rory back, his condition was a bit of a shock when we took his rug off,” she said. 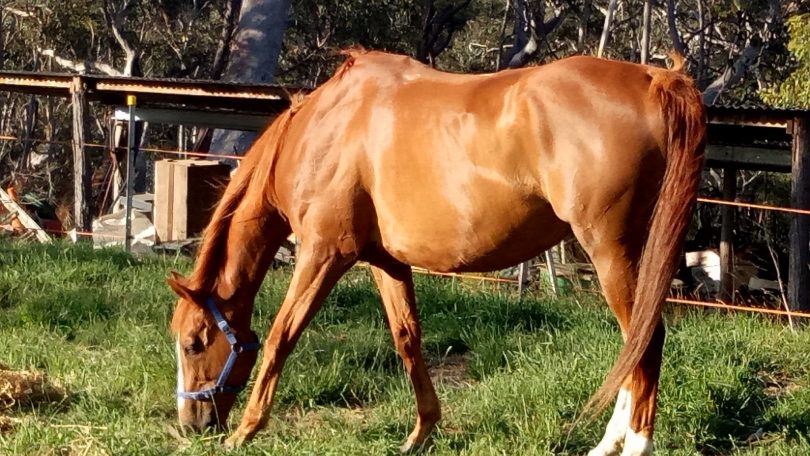 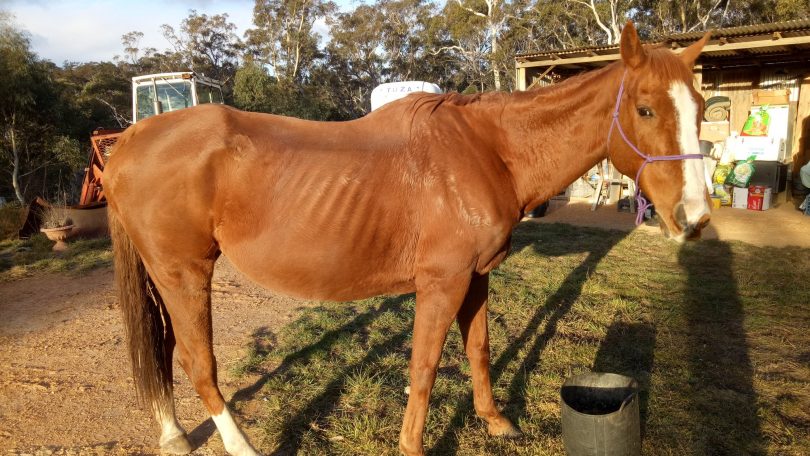 “He hasn’t a mark on him or any new scars on him! But he has a large amount of muscle wastage due to probably hiding and not doing the work he was used to. Also, his rug has probably saved him with the recent snowfalls.

“I have a great diet plan for him which will change slowly as he gains more strength. Rory is so weak at the moment, even walking from day yard to night yard is an effort.”

Wanda doubts that Rory would have survived a winter, alone, in the mountains for another four to five months until the gates were opened again.

“He would have died. Even thinking it I well up with tears. It was that close,” she said.

“I’d like to thank everyone for your support, encouragement, the endless time searching, and telling me not to ever give up.

“’He is out there, and someone will see him’ said the mountain riders who have become friends, though not even knowing Rory, or my attachment to my horse.” 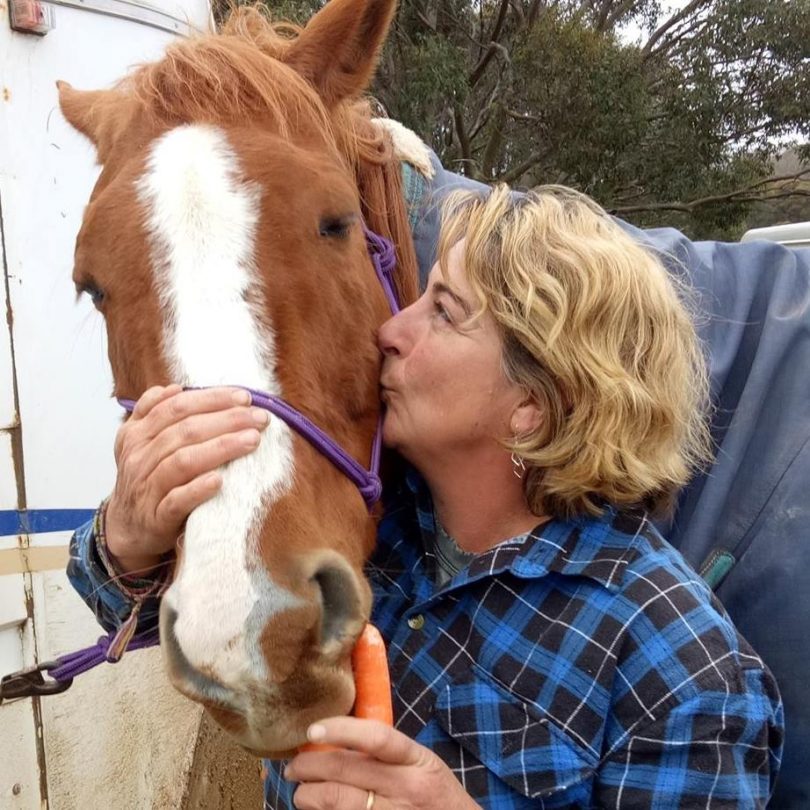 What a beautiful story. I bet he loved his brief encounter with the wild brumbies. Great news he has been found 🙏🏻❤️ I would be beside myself with worry, especially having those gates closing this weekend 😢😊

Yay for Rory! Were the horses found?

Capital Retro - 5 hours ago
Why can't the former directors just enjoy their generous pensions and stay out of it? What they think now is simply irrelevan... View
News 23

Capital Retro - 5 hours ago
Double handling makes no commercial sense but the ACT government is worried about that. It is more likely that the waste we a... View
Maya123 - 5 hours ago
I have been in Canberra since way before 2008; 1974 in my case, and I always heard Fyshwick referred to as light industrial b... View
chewy14 - 8 hours ago
JC, Except you'll have South Tralee right next to Hume shortly as well and although we've got a border, you can bet those res... View
Business 19

JC - 6 hours ago
The paper is still going to be made. View
Rebecca Hosking - 9 hours ago
Jane Larkin Naomi Feuerherdt Kim Beaumont This is a bit sad 😥 Remember our team photos on the massive reams of paper 😊... View
Acton - 18 hours ago
A local paper that has a rabidly biased weekly column from a once amusing but now worn out journalist who intentionally and r... View
News 6

Sam Walker - 16 hours ago
Sean, we need to be smarter than that. People getting pissed off about the SFFP preferences are failing to understand that yo... View
Property 16

Sandra Wormald - 17 hours ago
Oh, so that is where the money from the tax payers went, which was meant for bush fire and flood relief ..... View
News 3

@The_RiotACT @The_RiotACT
Whether its fan dancing or respectful foraging that takes your fancy (or a live-streamed spectacular by Canberra super band Hands like Houses), the Where You Are hybrid festival has hope and happiness for everyone. Find out how you can get involved https://t.co/AdGgDR5rD9 (4 hours ago)

@The_RiotACT @The_RiotACT
Meet Tom Falco, a Gungahlin sports clothing fan and entrepreneur who's used the lockdown to create a side hustle https://t.co/Gn8gVrlmjB (5 hours ago)

@The_RiotACT @The_RiotACT
Flights have officially resumed between Canberra and Brisbane. Four flights left the capital yesterday and two will leave today, but the early birds yesterday didn't quite get the reception they were expecting in Brisbane https://t.co/NFS2sdXCDq (6 hours ago)