Want to get your name on the Stadium? 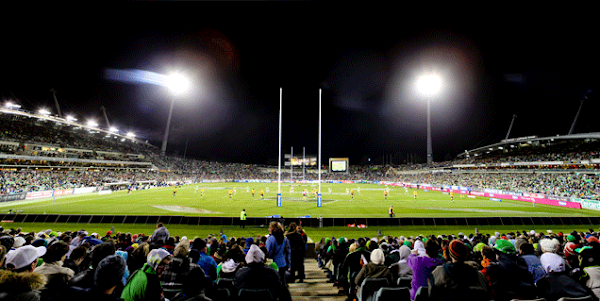 This has been buzzing around town for weeks now and puzzling us here in the Eagle’s Nest as we thought they’d been searching for a sponsor since they ditched the “Bruce Stadium” name in the long long ago.

But here’s what Andrew has to say:

The ACT Government is seeking a naming rights sponsor for Canberra Stadium with a minimum commitment of five to 10 years.? ?

— be one who’s corporate values align with the values of the ACT Government and the Canberra Community;
— be a publicly listed or local company that wishes to make a strong positive impact on the Canberra and/or national market;
— not be a direct competitor of our major hirers – the Brumbies and Raiders.

17 Responses to Want to get your name on the Stadium?
Filter
Showing only Website comments

Sinsations Stadium for sure. When people reminisce about Canberra’s golden age, the Private Bin no longer exists but Sinsations has staying power.

Please Clutch, do it for the girls, the customers, the regulars who drive in each weekend from the surrounding areas, the tradies who have to spend a week or two at a time in Canberra, and for the people of Australia!

Like. Though maybe Sexytime Stadium would be even better… just watch for spectators who keep their hands in their pockets, even during the non-Winter matches…

Some political product placement… Gallagher Stadium perhaps?
Only problem is whether there’s enough neon in the world for supplementary signage telling people how to say her name.

oh yes, our electricity, gas and water bills will go up so we can feel warm and fuzzy that the stadium has ACTEW painted on the side. God bless you ACTEW

Canberra Airport Stadium? The stands can be converted to offices with more offices built in the end goals and Manuka Oval could then close due to its proximity to the flightpath.

I’m tipping it will end up as ACTEWAGL Stadium.

or Bogan Stadium for all the rugby boofheaded fans in Canberra!

Let’s just hope it isn’t called BetFair Stadium or VB Stadium. Come to think about it, this naming rights nonsense seems confined to Australia. The US is happy to have names like Yankee Stadium, the UK has Cardiff Arms Park, and across the ditch the Warriors play their home games at Mt Eden Stadium.

Let’s go like the people of Detroit…. ROBOCOP STADIUM

Sinsations Stadium has a certain ring to it.

So ‘Stanhope Stadium’ is off the agenda?

Its not public art.

“not be a direct competitor of our major hirers – the Brumbies and Raiders.”

That’s a shame, AFL Park or GWS Arena have a nice sound to them, haha.

Given the form of the two local teams this year perhaps now is not a great time to be seeking such sponsorship.

Like. Though maybe Sexytime Stadium would be even better… just watch for spectators who keep their hands in their pockets, even during the non-Winter matches…

So ‘Stanhope Stadium’ is off the agenda?

Why don’t they just ask Bruce to sponsor it again?

We will all kick in….

Jacq Miller - 2 hours ago
shame there are no longer all 4 in situ View
Barry Matson - 4 hours ago
of what? View
Michael Guina - 5 hours ago
It has to start somewhere and those two buildings are living example . View
Opinion 80

Max Kelty - 6 hours ago
Bel Lee your housing manager mustn't be doing their job then or else processes have changed. When I was a HM at HACT people w... View
William Coats - 10 hours ago
The land tax was to stop people “land banking” houses should be used as homes not stagnant investments View
Lea Powell - 16 hours ago
William Coats it takes time to change policy directions. It’s not as simple as a click of the fingers. View
News 8

bj_ACT - 16 hours ago
Yes razor it’s a good point. Agree there are pockets of Tuggeranong and Belconnen that could do with some ACT government do... View
mattm - 16 hours ago
There are almost 130 Councils in NSW, and most of them do a much better job with municipal services than the ACT Government.... View
Heavs - 17 hours ago
Competent councils - like this one? https://www.canberratimes.com.au/story/6978805/nsw-central-coast-council-to-be-sacked/ Or... View
Community 1

Grass from Cairns: recalling the infamous Bruce Stadium incident of 2000