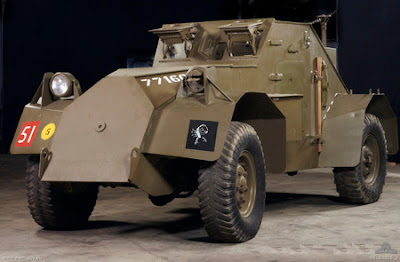 The War Memorial is letting us know about a big refurbishment in their much loved WWII galleries.

After the refurbishment, visitors will be able to see a number of objects that have not previously been on display, including: a rare Australian armoured vehicle, the Dingo scout car; a captured German Flak 38 anti-aircraft gun still in its original desert camouflage; a unique Chevrolet lorry and Breda anti-aircraft gun combination used by Australians during the siege of Tobruk. The HMAS Sydney showcase will feature a new audiovisual presentation, as well the exhibition on the Kokoda campaign. The iconic German Kübelwagen will return to display,

Additional emphasis is being given to the “home front”, with a beautifully restored civilian Studebaker sedan with its producer gas unit that powered it, and an Anderson shelter that was intended to protect families in their backyards.

The Dingo in particular looks fascinating.

Our work visited the Treloar Annex on Friday arvo and they have some fantastic stuff waiting to be put on show. Now the long wait until the gallery reopens!

I never get sick of going to the AWM, and with yet another exhibit to explore, it is timely the olds’ will be down from Brisvegas next week. As if an excuse is needed.

Steve Aust - 5 minutes ago
Colin Parton tell 1 story here View
Louise Flint - 35 minutes ago
James Daniels I was sent there for advice before I took a redundancy package. They ignored my superannuation and taxation que... View
Patrick Barrett - 4 hours ago
Dylan your fault View
News 22