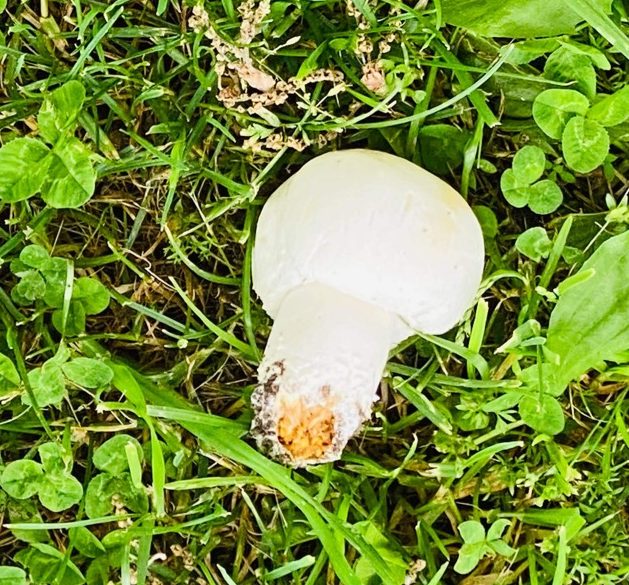 This death cap mushroom, which can be fatal if ingested, was found at Banjo Paterson Park in Yass. Photo: Tom O’Dea.

A Yass man who found two death cap mushrooms in a local park believes it’s a timely reminder for people to be aware of just how dangerous they can be.

Tom O’Dea found the deadly mushrooms in Banjo Paterson Park last week. After he photographed them, he picked them up and destroyed them.

The death cap mushroom (Amanita phalloides) is a deadly fungus which can be mistaken for edible mushrooms. Eating just one death cap mushroom can kill a healthy adult, with all parts of the fungus deemed poisonous even after it is peeled and cooked.

Mr O’Dea knows just how dangerous death cap mushrooms can be. Two of his friends died after eating death caps in Canberra almost 10 years ago.

He said he believed one of the friends picked the poisonous mushrooms in Braddon, mistaking them for the edible straw mushrooms often used in Asian cooking. He said his friend was extremely health conscious but still died despite eating only a small amount of the mushroom.

Symptoms of death cap mushroom poisoning can occur from six to 24 hours after ingestion, and include nausea, vomiting and diarrhoea. Sometimes people who become ill can appear to recover in a couple of days only to relapse with severe liver damage.

While the death cap mushroom has been found in Canberra suburbs in the past, a spokesperson for ACT Health said, unlike Yass, there have been no reports of early seasonal sightings in the Territory.

The spokesperson said the advice from ACT Health is to never eat mushrooms found in the wild as it is often hard to distinguish dangerous ones, such as the death cap, from other varieties.

“Death cap mushrooms are known to grow in areas across the ACT,” said the spokesperson. “While they often grow near established oak trees, they can also be found where no oak trees are evident.”

The spokesperson said people should not touch wild mushrooms with their bare hands, and should attempt to keep small children and animals away from them.

“Eating wild mushrooms is just not worth the risk,” said the spokesperson.

READ ALSO Work from Haig Park: the perfect way to leave the office behind

The early sighting of the poisonous mushrooms in Yass is believed to be the result of the above average rainfall received so far this spring.

A spokesperson for Yass Valley Council said they were aware of reports of death cap mushrooms in Banjo Paterson Park.

“We expect to see mushrooms in open areas at this time of year, especially after a wet winter,” said the spokesperson.

“Council staff will remove death cap mushrooms if they find them in council areas.

The mushroom can be 40mm to 150mm wide, is usually pale green to yellow in colour, and has distinctive white gills and a white stem. It also has a membrane-type skirt on the upper part of the stem, and a cup-like structure around the base of the stem. Sometimes this bulbous base is partially hidden in the dirt or under leaf litter.

If you suspect someone has eaten a death cap mushroom, it should be treated as a medical emergency and the person taken to hospital immediately.

If you think you’ve seen a death cap mushroom in Canberra, report it to Access Canberra on 132 281.

With due deference to the fact that I am trying to identify a mushroom from a photo, I have no doubt that it is wrongly identified. After 35 years of identifying Amanita, this has none of the characteristics of Amanita (particularly lacking a swollen base or volva) but all the characteristics of an Agaricus xanthoderma or Yellow Stainer, enough to make you throw up but not lethal. Agaricus typically appear in warming weather after good rain such as we’ve been experiencing. Amanita, on the other hand typically occur when the weather is cooling and particularly after a good thunderstorm in January or February which cools the soil temperature. Most Amanita occur from the end of February through to the end of March and are strictly seasonal.