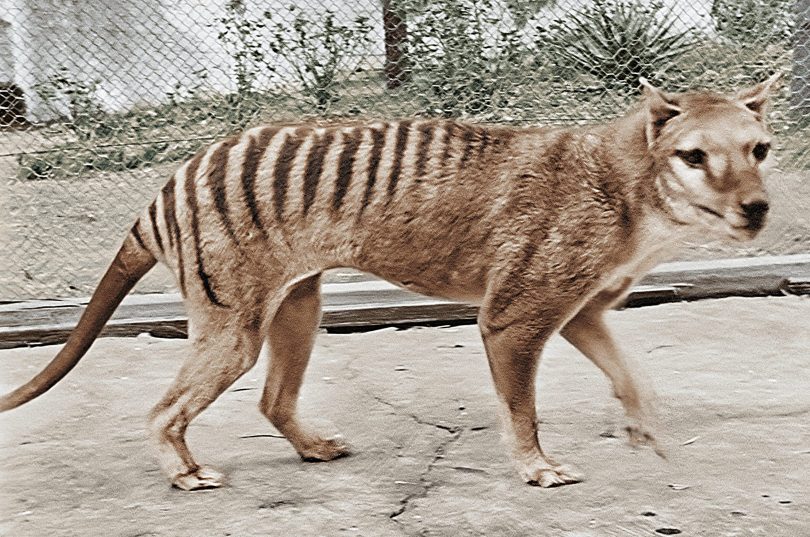 Benjamin, the last remaining Tasmanian tiger, from 1933, can now be seen in colour. Photo: National Film and Sound Archive of Australia.

The Tasmanian tiger may be extinct, but it lives on in the Australian imagination. Now a new colourised film of the creature will only enhance its afterlife.

The National Film and Sound Archive of Australia (NFSA) has released the colourised footage of the last-known surviving Tasmanian tiger, or thylacine, for National Threatened Species Day today (7 September).

Filmed in 1933 by Australian zoologist and naturalist David Fleay, the original black-and-white footage is the longest known surviving film of the extinct marsupial.

It contains some of the most widely seen moving images of ‘Benjamin’, who died in captivity three years later, in 1936.

The digitised file was then delivered to colourisation experts in France, led by Paris-based Composite Films art director Samuel François-Steininger, who collaborated with the NFSA and Stranger than Fiction Films on the acclaimed series, Australia in Colour.

NFSA curator Vick Gwyn said Samuel was taken with the stunning clarity and detail of the digitised footage and thought it would be a great candidate for colourisation.

“It seemed like a wonderful opportunity that Samuel jumped on,” she says.

“The Tasmanian tiger is this wonderful creature that managed to captivate and fascinate people – not just Australians, but people from around the world.”

The colourisation process is a combination of painstaking research, technology and imagination.

The Composite Films team began researching colours of the thylacine by investigating drawings, sketches and paintings, as well as pelts preserved in various museums, and written descriptions of the thylacine’s coat, before using cutting-edge technology, including artificial intelligence.

Samuel says that finding accurate colour references was a challenge due to the lack of original colour pictures or footage so his team relied primarily on written descriptions of the thylacine’s coat to inform the tints and shades present on the animal’s fur.

“These descriptions, combined with scientific drawings and recent 3D colour renderings of the animal, meant we were able to get a clear idea of what the thylacine’s fur should look like,” says Samuel. 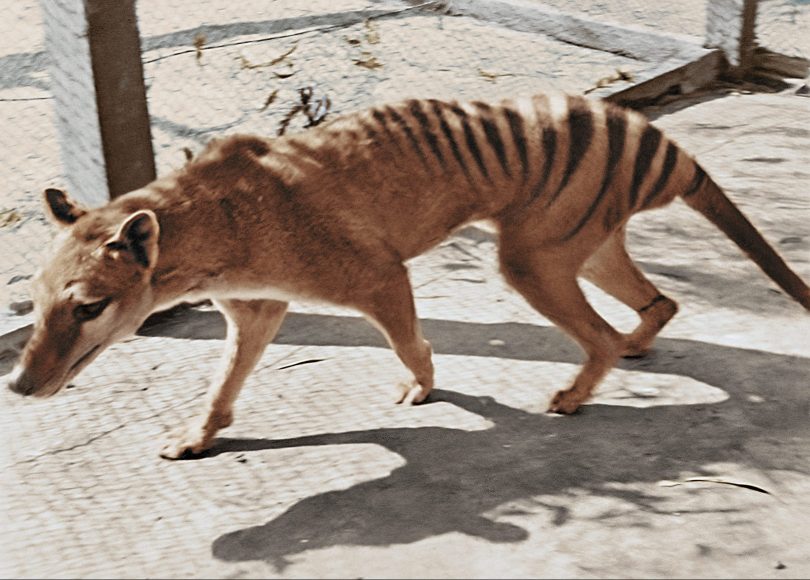 Another view of the thylacine taken from the colourised footage. Photo: National Film and Sound Archive of Australia.

“I have worked on more than 100 archive-based documentary films and series, most of them very complex. But for the thylacine, I faced a different kind of challenge and responsibility – I had to take care of the rare footage and pay tribute to the last representative of a species, which disappeared 85 years ago.”

The final result wowed the NFSA.

“The colourisation coupled with the amazing high-quality digital scan of the footage is just amazing,” says Vick, who can’t stop looking at it.

“You can see a depth to Benjamin’s pelt and fur, and little details such as that really make it quite astounding. It’s really stunning footage.

Vick says the colourised digital footage will continue to invite reimagining and reconnection to this iconic footage.

“It’s really amazing to make historic footage available to people so they can engage it,” she says.

“It’s almost like a reimagining of what it would be like if the thylacine was still around today and someone was shooting the footage on their camera phone.

“It’s one of those things that will captivate people just like the whole story around Benjamin being the last surviving thylacine and the mystery and hope that perhaps the Tasmanian tiger is still out there.”

Fewer than a dozen source films of the Tasmanian tiger, amounting to little more than three minutes of silent, black-and-white footage, are known to survive.

There is no other known surviving footage of the thylacine on colour film stock.

Yes, good to learn that no climate change denier feelings were hurt in the production of this article.

No ones denies that climate change doesn’t exist, whatwik. In fact, it could be said that people like you deny that is a natural event.

So, who are the real deniers?

You really need to extend your repertoire to include human-made (call it God-given if you must) climate change. Maggie Thatcher (who understood the science – sorry if that causes upset) will help you out.

It was a sad day in 1936 when this last surviving specimen died in captivity after all the others were hunted to extinction.

Well actually it was, by isolating them in Tasmania when the ice age ended and sea levels rose forming Bass Strait.

Switch, yes – it must have been the heavily industrialised civilisations that ended the ice age 10s of thousands of years ago

Without being isolated in Tasmania they probably would have completely extinct before Europeans arrived here.

Though the reasons for their

I was alluding to current climate alarmist narrative that polar bears and sovereign penguins were becoming extinct due to melting ice.

I don’t think there is any record of the thylacine being on the Australian mainland either but I haven’t researched that.

It’s not in colour, it is colorized. No colour photos or film of the thylacine were ever taken while it was alive. We simply don’t know what colour the animal was.

So sad to see this poor animal in a concrete pen, the last known individual of his species, all alone.
Perhaps we should be making sure we have Koala Bear footage in the can.