We have a ten year infrastructure plan – Ooops, not any more 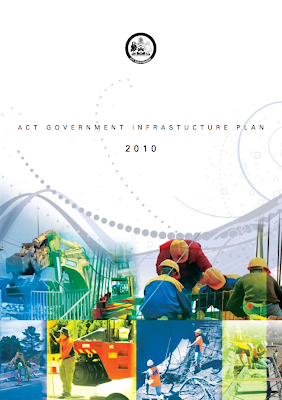 But that would be to ignore the pressing need for planners to have something to do when not fouling up the things that accidentally work.

On that note Mr Stanhope has announced a ten year infrastructure plan.

Released by Chief Minister Jon Stanhope, the 10-year document will be updated annually and includes not just short- and medium-term infrastructure priorities, but visionary long-term projects such as the VFT, and discusses the potential for new funding models for major infrastructure.

I guess it’s good to have a wish list all written down.

UPDATE: Liberal Leader Zed Seselja is making merry with typos in the document and the lack of new announcements:

“What must really gall the Chief Minister, who evidently did not read this document carefully or at all, are the incorrect spellings of ‘Maconochie’ (twice, p23) and ‘Arboretum’ (p25). This whole document is an embarrassment to the Chief Minister and his government,” Zed concluded.

FURTHER UPDATE: The Canberra Times has a report on the chaos and confusion in the palpably incompetent Chief Minister’s Department following the shambles:

A statement from the Chief Minister’s Department late last night said the 10-year infrastructure plan was ”temporarily withdrawn as an incorrect version was sent for printing and uploading”.

Apparently a spokesperson has said it is “unclear” when they will be able to find their arses with both hands and a map when the corrected plan will be available.

13 Responses to We have a ten year infrastructure plan – Ooops, not any more
Filter
Showing only Website comments

I think Jon needs to hire a few writers and editors, rather than slashing back his staff.

How could they not notice the typo on the cover??

“Dam poor form! Abuse of teh english langige is a V. bad thing!”

“What must really gall the Chief Minister, who evidently did not read this document carefully or at all, are the incorrect spellings of ‘Maconochie’ (twice, p23) and ‘Arboretum’ (p25). This whole document is an embarrassment to the Chief Minister and his government,” Zed concluded.

Dam poor form! Abuse of teh english langige is a V. bad thing!

Comical report in CT today about how the plan was yanked when the spelling errors and stuff were found, and the printed copies then trashed, together with reports on Jon Stanhope having a not very happy day.

The official excuse is apparently that an old version of the file was sent to the printers by mistake.

Which by extension would mean that:
* there’s little attention to version control
* the final wasn’t adequately proofed before despatch to the printers
* the proofs from the printers weren’t checked properly before sign-off, and
* the printed product was also not checked before the launch event proceeded.
Not just one little error – a whole chain of them.

Sigh…this is the office officially running the show…

If bigcohuna1 will do the monorail song at a town meeting I’ll come along and do the dance!

Maybe all you light rail enthusiasts should take note!

oh oh oh db84, will this new 2 year plan also include “exploring options like light rail” like in the last plan?

Looks like Chairman Jon has gone back to use the spell check on the report, the report link is coming up as an 404 Not Found.

One wonders how much has been spent on this new grand infrastructure plan since the last one was released in 2008 http://www.cmd.act.gov.au/__data/assets/pdf_file/0010/119728/infrastructure_plan.pdf
Do we really need new shiney 5-10 year documents every 2 years? Or is Jon just working up some work for his staff in his department?

hey it would get the mass transit freaks a good feeling and get buses off the road (where they hold up traffic) and maybe the cyclists could be ocky strapped to the front or even underneath and they can get all the fresh air they need?

Where are the dedicated bus lanes going to come from – existing car lanes – that’s where. Then you have to take a Bus – smart kolektiv thinking Kameraden Nohope.

and overhaul the health system – 1 hospital ??!!

it can all be fixed with a Monorail !

Indeed JB – written down is what we’ve been asking for. So it is good to see – the community is always seeking a degree of certainty on these things, and one of the most common questions I get is “when will such and such happen?”

A pity they didn’t list everything peppered through the text in the tables at the back. So guess I’ll have to go create said tables and do the job for them so we can post a succinct summary on the GCC website.

For anyone in the Gungahlin area interested in these infrastructure projects, Tom Elliott and several other senior execs from TaMS will be at the next GCC meeting (7.30pm 9 July Palmerston Community Centre) to talk about where to for the various projects funded in the budget.

If i’ll still be entertaining myself by stealing tulips from Floriade ten years from now I’ll be pretty pissed!

Perhaps in ten years it’s a different young gentleman you’ll be giving them to…?

Dragway? Anything to entertain the under 50’s?

If i’ll still be entertaining myself by stealing tulips from Floriade ten years from now I’ll be pretty pissed!