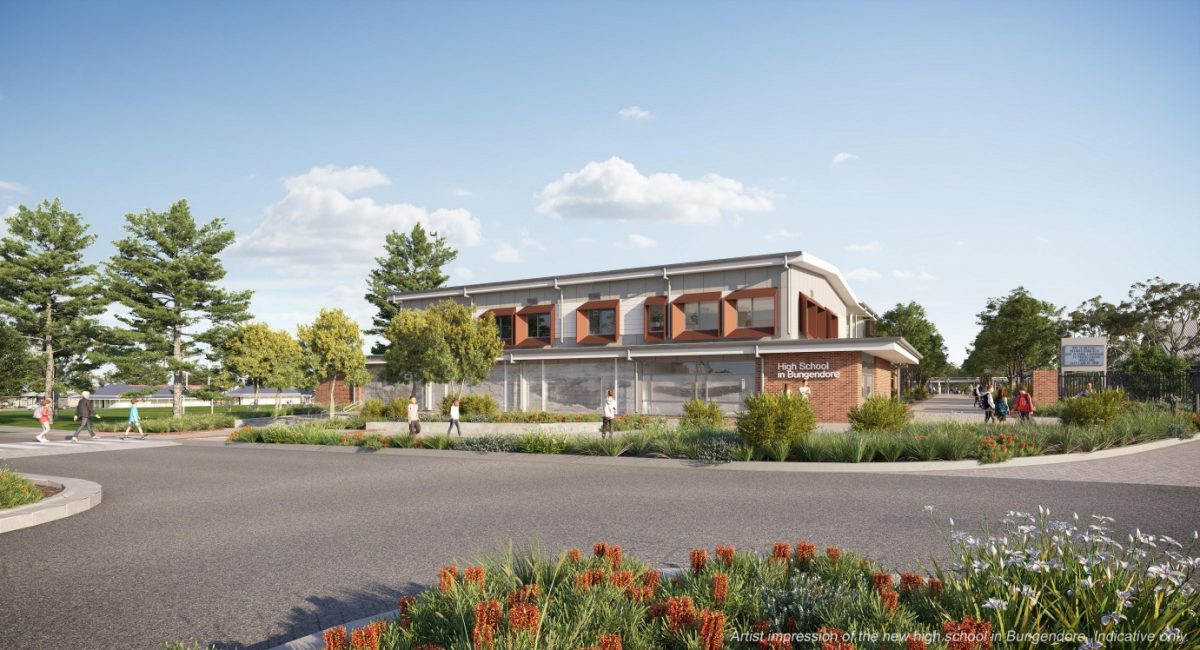 Artist’s impression of the entry forecourt to the new Bungendore High School from Majara Street. Photo: NSW Dept of Education.

All documents relating to how the site of Bungendore’s new high school was chosen will be released by the NSW Government within a month.

Controversy has surrounded the project’s site acquisition, with some community members concerned it had been done without investigating other potential sites and the apparent lack of local consultation with three-quarters of submissions opposing the original plan.

Queanbeyan-Palerang councillors have also refused to support the site, after backflipping on its original green tick.

NSW Labor MP Tara Moriarty called for all documents relating to the school’s site selection, acquisition of lands and planning process since 1 January, 2019 be released. 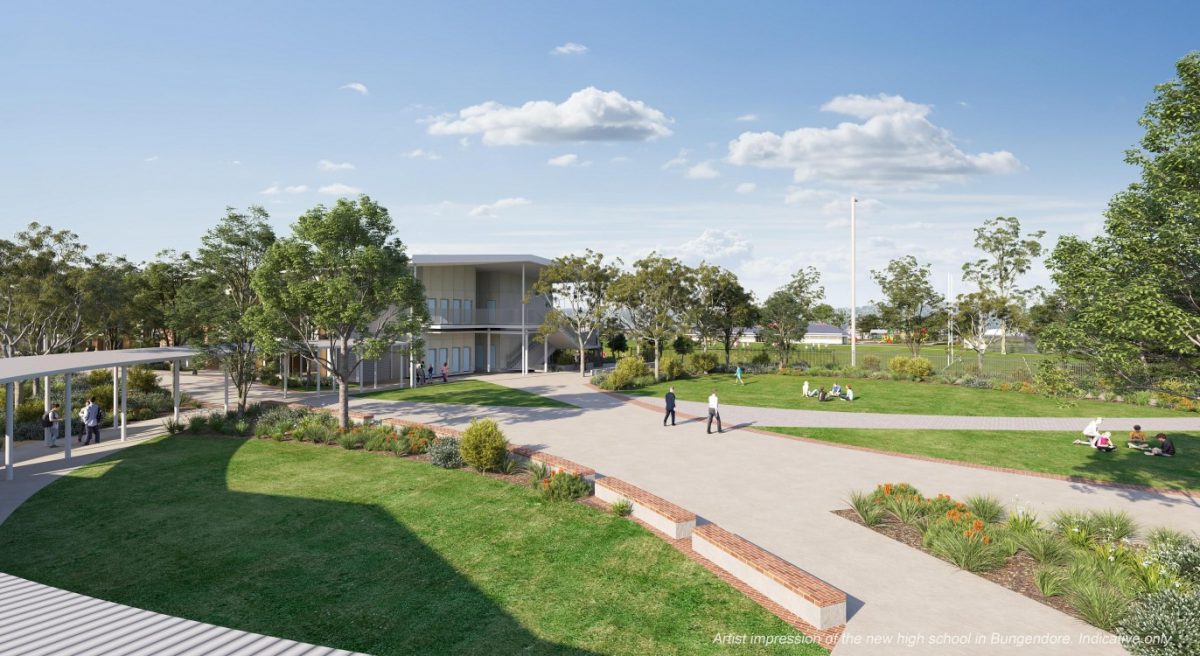 She said the choice of location and handling of the school’s development had been “nothing short of a mess”.

“Because of complications and lack of transparency around the site choice, there is quite a lot of division and concern in the community,” Ms Moriarty said.

“There is a lot of concern about the loss of part of a park, some local sporting facilities and other amenities. The town should not have to choose between gaining a new facility and losing existing amenities.”

READ ALSO Molonglo residents want future high school to be built up, not out

NSW Education Minister Sarah Mitchell said the government would not oppose the request, however she felt she needed to put her concerns about QPRC, and “some of the Labor council members in particular”, on the record.

“Following the local government elections, there were some changes to that council. All of a sudden, things that were in mid-stream had a complete about-turn,” she said.

“It upsets me to see that deliberate political attempt to frustrate the process, slow down the progress of delivery and deny students the opportunity to have this project happen earlier.”

More than 1000 hectares of land were assessed but Ms Mitchell said the the final location was chosen due to its proximity to the existing Bungendore Public School and other facilities.

“We have nothing to hide,” she said.

The decision to release the documents has been welcomed by vocal group against the project, Save Bungendore Park Inc.

In a statement on Facebook, the group said representatives would head to Sydney as soon as possible to examine the documents.

“We will finally learn what was behind the decision which has caused so many delays and such heartache in our community,” the group posted.

The finalised redesigned school plans have been put on exhibition until 10 October.

Modifications were made after 326 submissions about the original designs were received, with 72 in support of the proposed new school.

The amendment report included relocating the games courts and cricket batting nets from Bungendore Park to within the school boundary; removing proposed delineation works to Mick Sherd Oval and the War Memorial; maintaining the original town street grid along Majara Street; additional parking along Turallo Terrace; reducing the scale of the buildings; and introducing façade materials more “sympathetic” to the town’s heritage and landscape.

Some facilities will be removed and relocated by council in a separate process yet to be confirmed.

School Infrastructure NSW committed to continuing operation of the council administration building until 30 November 2022, the pool until 31 March 2023 (or the approval of the state significant development application, whichever came first), and the community centre until 30 June 2023.

“It is understood council intends to provide temporary staff and community facilities at the rear of 17 Gibraltar Street until new permanent facilities are opened,” the report stated. 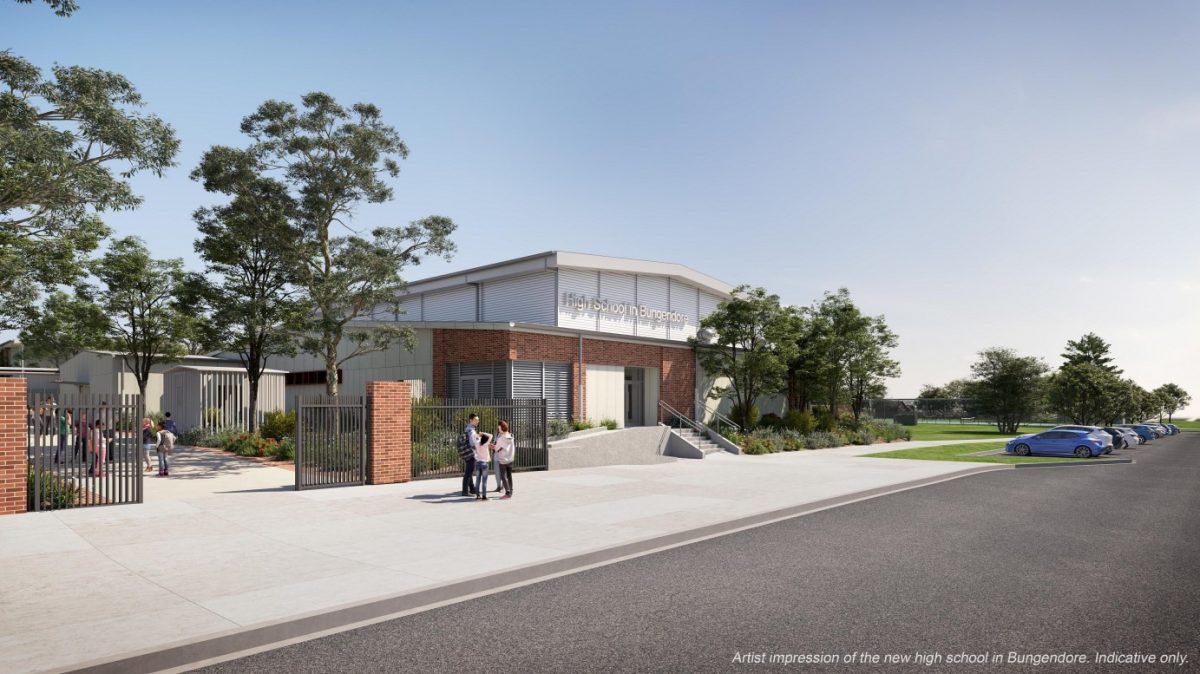 “Getting a high school for Bungendore has been a very long journey for the community,” she said.

“For the last two years our local children have had their education greatly impacted by COVID, and until this school is built our primary school children will continue to be impacted.

“It is now time to put the interests of the children in our community first.”

The singular defining aspect of this project is that the parkland and the community facilities associated with the school will be used by the region’s children. There is no better use.

There is no loss of community amenity when that amenity is used by the children. The economies of scale are self-evident.

I participated in the Education Department’s consultation process and found it professional and competent. The Labor Party and the Greens have made it their goal to frustrate and delay this high school. Their behaviour is shameful.

It is fine by me that the Save Bungendore Park [From Use By Children] Group are travelling to Sydney to study the minutiae of the decision making process. When it comes to selecting a high school site, my trust is in the professionals.