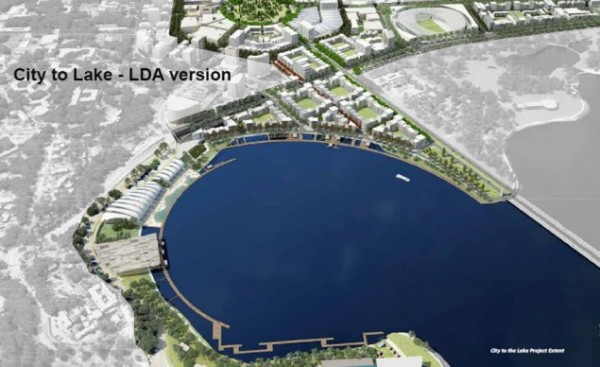 A re-elected Labor government would set up an urban renewal authority to take responsibility from the Land Development Agency for oversight and consultation with the community on infill projects like the City to the Lake, Northbourne Avenue and CBD redevelopments.

The new authority would administer precinct Development Agreements and manage higher density development in partnership with the private sector. Labor says the new body would “work closely with the community, using representative consultation to actively seek the opinions of Canberrans”.

“We will increase requirements on the government to engage the community and take the full spectrum of the community’s views into account,” the party said in a statement.

The Land Development Agency would retain responsibility for the Territory’s greenfield land releases and the meeting of affordable housing targets.

The Canberra Liberals have previously announced that they would review the LDA’s operations and pull back on the City to the Lake proposal to focus on reinvigorating the CBD.

Pictured is an LDA-issued image of the ACT Government’s City to the Lake precinct plan.

I have no faith that either side of politics can fix this. The beauracracy is so entrenched, I can’t work out how to get rid of it.

What is needed is effective administration and leadership from the responsible Minister, not structural reform to the bureaucracy. Ministers have eyes. Ministers get feedback from the community. What is wrong with them then ? Are they just dumb ? Are they just swallowed up by the Labor party machine policy ? Are they too scared to put some better structure (pun intended) and planning/consultation into development lest it get in the road of ACT Labor/Greens rushed infill program ?

ACT Labor/Greens have had plenty of time to sort out planning and consultation here – and failed. I doubt they can or want to do better – the proposed Labor Urban Renewal authority is just more window dressing, like the proposed ACT Govt architect is.

I dunno if the “review” by the Libs will change things, but if they do gain Govt here and planning doesnt improve, then vote them out in 2020 too.

Um the government that wasted $1 million of our hard-earned on the faux-hipster Westend monstrosity (and failure – still all but empty of millennials or any other generations during Floriade and the school holidays!) wants us to trust it on urban renewal? What a joke!

I have no faith that either side of politics can fix this. The beauracracy is so entrenched, I can’t work out how to get rid of it.

Several years ago Jon Stanhope tried to get the system to work by rearranging the whole bureaucracy. It did not work – the same people and their culture simply moved around their offices to suit the new structure. The proposal to split will not change anything – the reality is that it is supposed to be two agencies now. Just that both work together to achieve the aims of the treasury/economic office under the same Minister – being the present Chief Minister.

It is about needing new leadership from a Minister committed to the city’s amenities and to quality design (aesthetics and sustainability and affordability). It is not about new structures necessarily – but more about a complete change of culture within the leadership of bureaucracy towards residents and about quality of life. There are still some very dedicated people within the planning and development agencies who fight the good fight from within – but due to all sorts of pressures, most have left to remain sane.

Its not like we have a Ministers partner actively working for a developer or anything.

“A re-elected Labor government would set up an urban renewal authority”
Translated into layman’s terms, this means they are going to spend a heap of money starting up yet another government department, who will be staffed at great expense by their mates, whilst giving them no real power to make decisions but to simply “advise” and “make recommendations” to the body that is currently supposed to be doing that job.
It’s just another heap of red tape for residents, developers and planners to have to deal with but will not change the ultimate predestined outcomes as agreed to in back rooms and secret meetings.

chewy14 - 38 minutes ago
Nobody, Except no one is saying that wind and solar are the only renewable technologies available.... View
Capital Retro - 39 minutes ago
In the meantime I will be storing petrol for the cost of it and the container only so when the lights go out I won't have an... View
nobody - 1 hour ago
I agree the trend is away from fossil fuels, so that all our coal derived electricity, gas derived heating, and and oil deriv... View
Motoring 32

@The_RiotACT @The_RiotACT
22 Canberra suburbs now have million dollar plus median home values. Is yours on the list? https://t.co/qPM3RdCSgB (28 minutes ago)