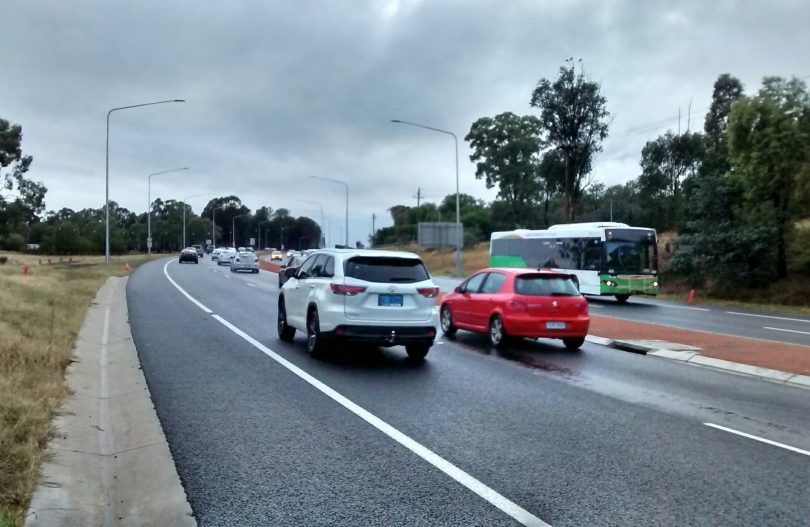 All four lanes are now in operation on the Cotter Road. Photos: Ian Bushnell.

Weston Creek and Molonglo residents are enjoying a smoother run to the city and home again after the opening of four lanes on the Cotter Road as the duplication project nears completion.

The eagerly awaited $28.9 million project was expected to be completed in early February, but issues such as the relocation of water and utility services, and unexpected site conditions delayed the finish until early April.

But while some works still need to be completed, the opening of four lanes has been a welcome relief to drivers who have been caught in traffic snarls for months as the duplication proceeded.

The shared path, with a portion between Yarralumla Creek and the eastern approach to the intersection with the Tuggeranong Parkway already open to pedestrians and cyclists, is due to be completed in March. 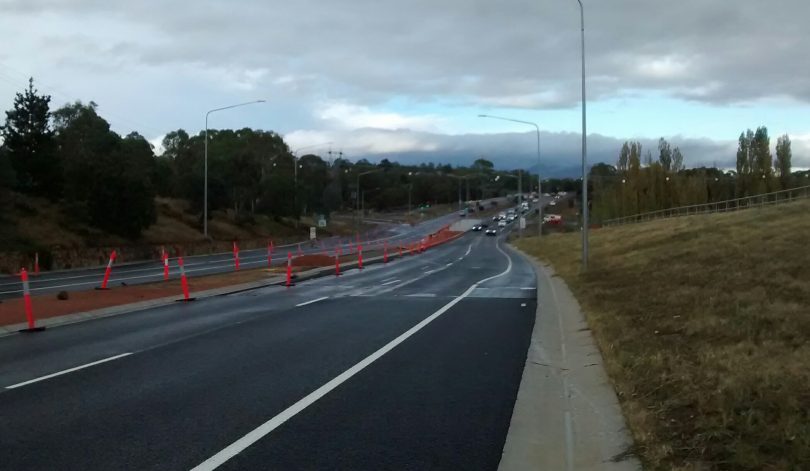 Oncoming traffic from Weston on the Cotter Road.

The Cotter Road carries more than 20,000 vehicles a day as a major thoroughfare for traffic, travelling from Canberra’s inner south suburbs, Weston Creek and the new developments in Molonglo Valley through to the city.

The project will complete the duplication of Cotter Road between Adelaide Avenue and John Gorton Drive and slash driving times.

The project remained on budget.

What do we reckon about the new Cotter Road then? There’s some resurfacing at night this week but in the day all the new lanes are open. Morning rush hour isn’t real good. Everyone trying to get from two lanes to one at Adelaide Av. What’s the fix? Is anyone working on one?

This has been a debacle from a planning perspective from day one. They built a brand new two lane section but did not put the gutters in so dug up a small slice along the whole length of it, put the gutters in then had to re-seal that slice. That has happened again now on the “old” section towards Molonglo and only now have they started building the bike path near North Weston that will impact on traffic flow until it is completed. A number of traffic islands that could have been completed early in the project are also not complete and the top of the sound wall, potentially the longest and fiddliest part of the project has not been started so will also impact on traffic flow. Sadly far too typical of new roads design and build in Canberra, don’t get me started on the bloody debacle of the access into Majura Park from the Monaro Highway.

I was trying to follow the blog guidelines, you know, be positive. In fact general driver behaviour in Canberra is disgusting as you witnessed with me yesterday.

I drove from Deakin to Weston at 3.00pm today via the “new” Cotter Rd road widening. It took me 30 minutes – it was absolutely chaotic with no traffic control. The speed limit was 60 kmh dropping to 40 kmh when two lanes turned into one approaching the Tuggeranong Parkway flyover which became gridlocked with southbound Parkway traffic coming of the ramp to turn right over the crossover which was reduced to one lane also. Fortunately, one of the workman could see what was happening and he removed the traffic cones single-handedly on the crossover to clear the jam.

The four lanes may be open but there is still a lot of work (and traffic planning) to be done.

When is the grid lock from glenlock interchange getting fixed

And don’t forget the Greens voted against the duplication, believing it would encourage people not to use buses (also stuck in traffic)

That’s not what he said.... even the article you posted says that his main aim was a better discussion around public transport.

How can moving the traffic bottleneck from the Tuggeranong Parkway /Cotter Road intersection to Adelaide Ave be any sort of improvement???

I can see the jam has now moved to merging Adelaide avenue.

Months? It's been closer to a year. Plus, they decided *now* to build a path westbound past McCubbin Rise to slow traffic to 60 kms/hr. It's moronic, they had all year to do it!!!

Nice bit of workmanship on an important piece of infrastructure.

Pity Gungahlin remains grid-locked thanks to the glacial pace of roadworks, and the ACT Gov’s brilliant plan to start duplication of Horse Park Drive from the wrong end.....

People from Bungendore will arrive at Phillip in that time.

Check out the google traffic heat maps in the mornings Simon, Southside is a dream.

Seeing how good the surface is it will probably now be good for some 100km/h plus runs from Weston/Denman Prospect towards the city, subject to traffic light sequencing.

Well done Huon for a good job and active interest in looking after all users. Next step is to figure out how to extend this new capacity past Yarralumla into Adelaide Avenue and merge into Northbound Tuggers Parkway. Both are bottlenecks in rush hour and bound to get worse as Molongolo expands.

Really makes you yearn for the days when they planned to build an enormous $100 million floating roundabout over Adelaide Avenue: https://i.imgur.com/2u42FgVl.jpg
Sadly, I think it died years ago, along with the more extensive Brickworks development.

I couldn’t find anything on that link about a “floating roundabout” on that link but the other pics/articles were good!

We will have to be satisfied with the rainbow roundabout at Braddon I guess.

Thanks for that Arjay – I get the idea now. It would have looked great in rainbow colours.