In 1995 there were 15 primary school aged kids running around frosty football fields, hoping to play for the Socceroos and pretending to be Alan Shearer, who at the time was the world’s most expensive footballer.

Nineteen years later in 2014, Socceroo Carl Valeri and local Tuggeranong product Matt Menser will put their sentiments aside as they are likely to clash in midfield in the Round of 16, Westfield FFA Cup, Tuggeranong United V Melbourne Victory, 16 Sept at Viking Park.

Former Socceroo and current Western Sydney Wanderers captain Nikolai Topor-Stanley, another of the same 1995 U11 team, will most likely be watching the match on Fox Sports proud with what all three have achieved.

“I can’t believe they are playing in the Westfield FFA Cup. It’s great. Well done to the players, the fans and the entire club”, said Carl, one of Tuggeranong’s favourite sons.

Coach Wayne Hughes will also be watching we suspect. Perhaps claiming that his dribbling and 1v1 drills he put the team through finally paid-off. Wayne was also the Tuggeranong United past president between 1996 and 1999. 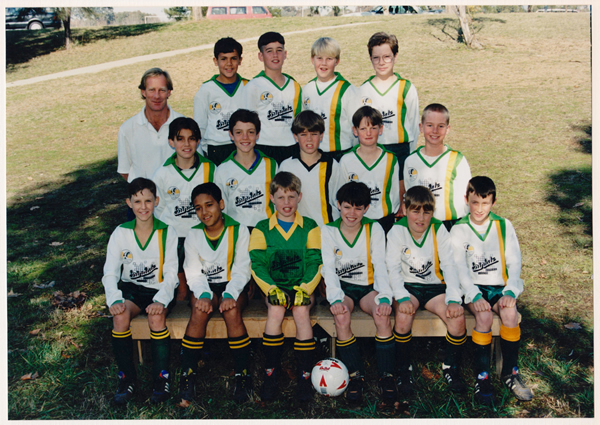 As a high school student at St Mary MacKillop High School, Wanniassa, in Canberra’s southern suburbs, Carl would peer outside his school window wondering what he would do for a living when he was older. Maybe football?

Outside and barely 100 metres away he would see a large open sports area with a few seats, called Wanniassa Enclosed Oval and the former home ground of Tuggeranong United. Several years later it was to become Viking Park and turned into a rugby union fortress.

In 2014, football has returned to the same place that fuelled his dreams. Next Tuesday this 11 year old kid and his mate will be having a simple kick around down at the oval. No doubt there is another school kid looking outside that same window wondering what they will do when they get older.

Tuggeranong United FC will host Melbourne Victory FC in the Round of 16 match of the 2014 Westfield FFA next Tuesday the 16th of September. Purchase tickets from ticketek.

Jenny Graves - 9 minutes ago
Kit Oates those people who get impatient, in my experience, tend to tailgate. If you don't, then that's great and I apologise... View
Alex Dee - 52 minutes ago
You need to get out more. View
Francesco Merlino - 59 minutes ago
Alex Dee Alex Dee I hope you are right! View
event 1

Dom Polegubic - 27 minutes ago
This is a good link to an intro to Croatian wines: https://winefolly.com/deep-dive/introduction-to-croatian-wines/... View
Opinion 11

Deepak Ramanath - 48 minutes ago
James Forge Wow, where is this? View
James Forge - 49 minutes ago
Deepak Ramanath the government is about to demolish an overpass and replace it with yet another set of traffic lights View
Kylie Wylie - 1 hour ago
Residents of Lyons suffer badly every work day. Every main road is gridlocked with rat runners that mostly won't even let oth... View
Lifestyle 2

inverted63 - 58 minutes ago
Oh dear. ...Makes accusations about made up statistics & then cites a total of 3 successful female artists across a whole ind... View
Breaking 1