What to do if you get injured at work 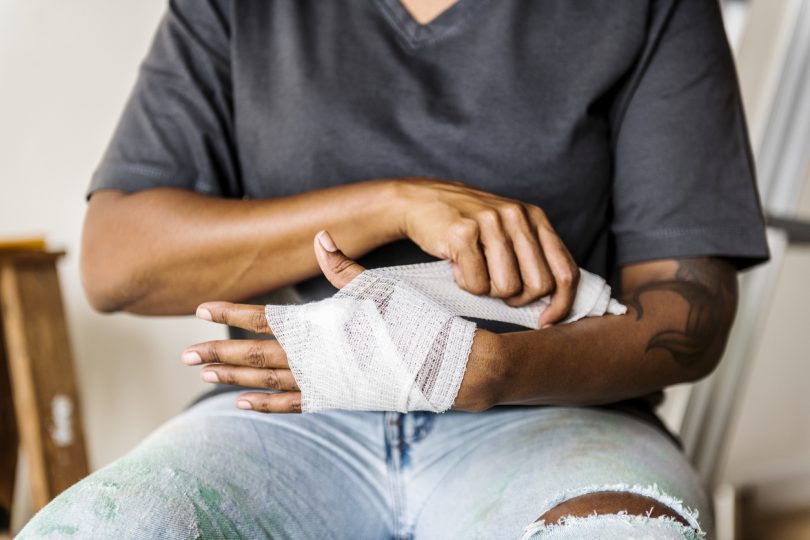 With more regulations placed on employers than ever before, it’s reasonable to expect that when we head off to work each day, we will return home safe and injury-free.

But according to the latest report from Safework Australia, the risk of injury and even fatality is still reasonably high across many industries. Those who work in the postal, transport or warehousing industries are at the greatest risk of death while on the job, with 47 national fatalities in 2015-2016 alone. This was followed closely by agriculture, forestry and fishing with 44, and construction with 35.

The largest causes of fatalities involve vehicle collisions, falling from a height, and being hit by a moving object.

The ACT had the lowest overall rates of worker fatalities, with six confirmed deaths between 2003 and 2016 (compared to 395 in NSW).

In terms of serious injuries, the latest Australian Workers’ Compensation Statistics Report shows that from 2015-2016:

Working in administration doesn’t make you immune either, with 4,245 serious claims made in the same year. Not all are physical, with mental disorders accounting for six per cent of claims.

Getting injured at work can have serious and life altering consequences, affecting everything from your ability to get around, to play sports, and even to keep working. Injury can also cause a lot of strain on your finances, with lost productivity and medical expenses adding up over time.

Unfortunately, making a workers compensation claim has developed somewhat of a stigma in the past decade, with a reported increase in false claims generating media reports that can have a way of making legitimate claimants feel shameful.

Emily Bowler from Baker Deane and Nutt (BDN) Lawyers says, “There are many different ways you can get injured at work – from physical injuries to psychological injuries such as anxiety or stress. Generally, if it’s serious enough to prevent you from working, or causes you to have to pay medical expenses, it is serious enough to find out if you are entitled to compensation.”

If you are injured at work, Emily recommends:

Your entitlement to workers comp and/or compensation for negligence will depend on the seriousness of your injury and the time you have had to take off work.

“If your claim is successful, the maximum time you can claim full wages is 26 weeks,” says Emily. “If you are still injured and need more time after 26 weeks, the payments drop to 65% of your pre-injury wage. In addition to your wages, you are usually able to seek reimbursement for medical expenses.

“If you are permanently impaired, we will have an independent doctor assess the level of impairment, to avoid any perceived bias from your own doctor. Permanent impairment can entitle you to additional benefits through workers compensation.”

Emily says that not all compensation claims are accepted, but this does not necessarily mean that it is the end of the road.

“Give us a call and we can look at other alternatives or a dispute resolution. Just because you get a letter stating that you have been rejected doesn’t mean that there are no more options available to you.

“Clients often worry that the process will take forever to resolve, though it’s usually not the case. They also worry that they’re going to have to go to court, however court is frequently a last resort. We still prepare everything as though we might go to court, but it takes a pretty serious dispute for it to end up there.”

Emily says that all lawyers in the BDN office are experienced in dealing with personal injury and workers compensation claims, and can offer guidance no matter what stage of the claim you are at.

“Whether you’ve recently been injured, or have had a claim rejected, give us a call. We can help you understand your rights, and the compensation process, and provide insight into your options moving forward.”

To chat with Emily, or another highly experienced lawyer from Baker Deane and Nutt Lawyers, call the office on (02) 6230 1999.

Good article and some handy stuff about when/how to report the injury. But I have to ask: Why would you require the services of a lawyer except in the case of a very serious injury or where things go pear-shaped? In the majority of cases things go smoothly without the intervention (or cost) of a lawyer and injured workers are back to work on average within 5.6 weeks (as stated in the article) and in the majority of cases a lot earlier than that. It is not a statutory obligation to become legally represented just because you are on a claim…just sayin!

Thank you for your comments. We agree with you. The problem, of course, is that people will be urged to go back to work quickly, sometimes against the best interests. This is because the insurer is keen to get you “off their books”.

Often people have longer-term problems, which may not be apparent at first. We ensure that to the extent possible, your rights are protected.

chewy14 - 14 minutes ago
Wow, polling commissioned by a left wing think tank finds that the left wing Greens are going to do really well at the next e... View
News 1

JS9 - 30 minutes ago
Gee the ACT really does scrape the bottom of the barrel to find political nominees on all sides of politics.... just another... View
News 20

Alex Fulford - 3 hours ago
Elections of course, lol ya ain’t getting my vote 😂😂 View
Michelle Cooper - 14 hours ago
And some of us have both. View
Daniel Duncan - 15 hours ago
Julie because of Covid-19. Once it ends it will go back up. View
News 10

Chris Sant - 14 hours ago
Gladys is an absolute disgrace. Completely ridiculous to suggest that people who have been doing essential work in country Vi... View
Denise Bourke - 17 hours ago
Anne Cahill Lambert I keep waiting to hear that the poor Albury hoteliers have been given Covid quarantining status so that r... View
HiddenDragon - 19 hours ago
If there are arrangements that allow freight from Melbourne to travel through NSW to supply ACT and NSW shops, surely those a... View
News 77

@The_RiotACT @The_RiotACT
The West Basin place plan has been released by the ACT Government, providing valuable detail about the multi-year development, but little mention of where the area's residents will live https://t.co/ThGXcooFe6 (16 minutes ago)

@The_RiotACT @The_RiotACT
Police have renewed their calls to find Amara Hynes, 14, who has not been seen or heard from since 5:00 pm on Saturday at Jerrabomberra https://t.co/hQ4E3HaQJ3 (30 minutes ago)