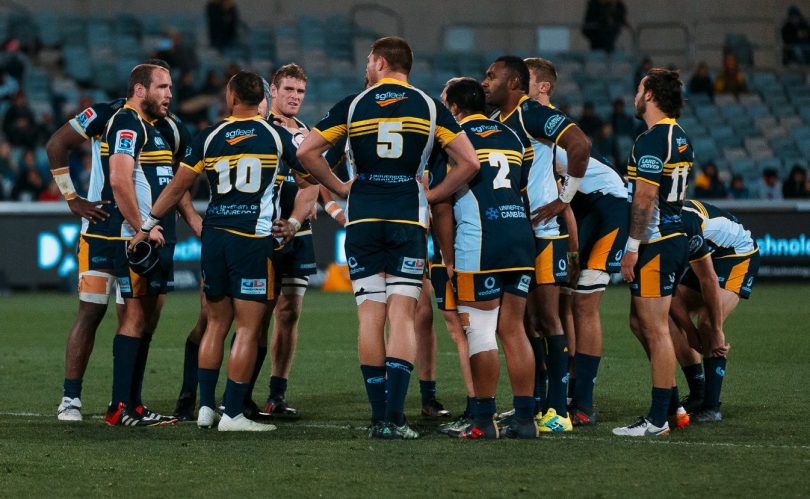 Why can’t the team be renamed ‘the ACT Brumbies’ again? File photo.

The renewed push by television broadcasters calling on the names of Super Rugby teams to better reflect where the teams come from can’t come soon enough.

Last weekend the Brumbies played the Lions. They also face the Stormers, the Sharks, the Bulls, the Blues, the Highlanders and the Hurricanes, amongst other teams in Super Rugby.

I would suggest that outside the rugby faithful community, there is little understanding of where the teams are based.

The names: the Sharks; the Blues; and the Lions, simply create confusion. These names have already been adopted by Australian football teams in other codes.

I remember well when the ACT was removed from the Brumbies name. There was confusion around the reason why this occurred. My understanding at the time was that the name of the team needed to change to represent Southern NSW as well as Canberra. It was felt by many that it was a marketing decision more than anything else.

But having ‘Canberra’ in the Raiders name, hasn’t affected their appeal. Nor should it.

If anything, if the Brumbies re-introduced the ‘ACT’ into their name, it would geographically adhere them to their home location. It would help the marketing of teams playing the Brumbies at Canberra Stadium. It simply gives more information about the location of teams within the Super League.

While on the subject of names for Canberra sporting teams, I can’t help but identify with teams that reflect the city or least have names that have a philosophical connection with the ACT. It’s the same with individual athletes. I am drawn to the names of athletes who have some association with Canberra.

The Raiders were originally named because they were coming from outside the NSW stronghold of Sydney in the NSWRL. They were effectively coming to ‘raid’ the NSW coffers; although there was a suggestion that the name originated from the Oakland Raiders in the NFL.

But for the Brumbies, there were plenty of left-field options before coach Rod McQueen presented the Brumbies as a name-option for the Super 12 side in 1995. Thankfully, Bogongs, Diggers and Senators were confined to the wastebasket.

The Brumbies name reflected the wide open running style adopted in those early years as well as a connection to the nearby Snowy Mountains.

The UC Canberra Capitals name is an obvious connection to the national status of the city. Their North Queensland-based opponents in the WNBL are aptly named the Townsville Fire.

Which is why I don’t mind the name of the Canberra team in the new Hockey One series: The Canberra Chill pretty much reflects the temperature in our winter months. Canberra sporting teams seem to have been reluctant to embrace the cold in their names. This could possibly be because the ACT community believe that the less you talk about the temperature, the less it affects you.

The Canberra Chill has changed that. Hopefully, more will follow in the future.

9 Responses to What’s in a name? The case for the Brumbies to re-introduce ‘ACT’ into its name
Filter
Show all comments
Showing only Website comments
Show only Facebook comments
Order
Newest to Oldest
Oldest to Newest

Given the background of the players the name “ANZ Brumbies” would be more appropriate.

There is an obvious logic to tacking ACT or Canberra on to the name of the team, but perhaps then the other part of the name would need to be changed to something that the ACT Government does not want to shoot at from a helicopter.

Acton - 1 hour ago
This is a problem of your own making. The Labor/Greens ACT government have intentionally restricted land supply. Result: high... View
News 12

Jody Maree Harrison - 3 hours ago
Do the right thing please don’t be dooooshhhhhhhkos Think about others for a change... View
Ciara Sheehan - 9 hours ago
Well they better stay home for 2 weeks!! View
Kristine Barker - 11 hours ago
There have been no cases in much of Victoria for nearly as long as Canberra, seems sad and unnecessary to lump all Victorians... View
Sport 17

Guy Hosking - 10 hours ago
I was there. Cowboy Neale was too big for Francis Bourke. The ACT kicked straighter than the VFL. View
Remy Martin - 14 hours ago
Rod Ferguson absolutely Rod. I’ll drop you a message mate. Cheers View
Matt Hellier - 14 hours ago
Mark Donaldson see Canberra can even beat the best of Victoria View
Breaking 9

Lisa Bishop - 11 hours ago
Keep those bloody Victorians away from everyone else! For a month at least! View
Andrew Brien - 11 hours ago
start calling Mexico Chy-Na soon... View
Jane Curry - 12 hours ago
Nisette Anderson thanks - we are keeping our distance. 😘 View
News 5

Sally Tregellas Wodzinska - 14 hours ago
Maybe after the high numbers for 8 plus years, there isn't the need or demand for more apartments? View
show more show less
*Results are based on activity within last 7 days

A 44-year-old man is dead following an altercation with another man at the Kingston Hotel on Sunday night (5 July)....
What's On 0

The Canberra Liberals' Mark Parton has been kicked out of the ACT Legislative Assembly for refusing to remove a TikTok...
Lifestyle 47

UPDATED 4:15 pm, 6 July: Victorians will be refused entry into the ACT from midnight Tuesday (7 July) and Canberrans...
Community 35

Overdevelopment in Canberra is shaping up to be a key election issue after it was revealed that the lion's share...
News 50

Canberrans aged 60 and above can now apply for a Seniors Card online to access a range of discounts, special...
News 30

Canberrans will soon have another option to traverse the city with up to 1,500 dockless electric scooters being introduced under...
Breaking 28

It was a curious election count watch on Saturday night (4 July) as the ABC's Antony Green tried to make...
Opinion 23

@The_RiotACT @The_RiotACT
Rebecca Vassarotti says the COVID-19 crisis has highlighted the broader impacts of homelessness on public health, and the terrible consequences of inadequate investment in social housing infrastructure https://t.co/YCFpLe2p3S (1 hour ago)

@The_RiotACT @The_RiotACT
There's a wide selection of music to choose from this week that will suit both the going out & the stay-at-home types. Find the details in the latest #GigGuide https://t.co/BPxVKgkn1V (10 hours ago)

@The_RiotACT @The_RiotACT
Readers are evenly divided on whether we should change the names of some historic sites. But what do you think about e-scooters? This week we're asking about the latest form of environmentally friendly transport https://t.co/g5vhnzHUGg (11 hours ago)