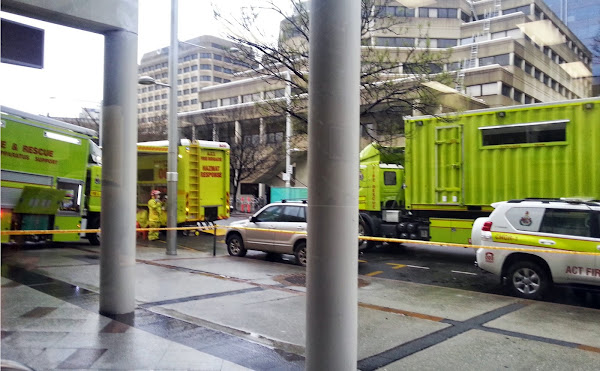 Multiple sources are reporting another white powder scare in Civic, this time on the corner of Moore and Alinga Streets.

Send in any pictures you’ve got to images@the-riotact.com and we’ll update when we’ve got more.

Lead photo by Mess, and this one from Adele: 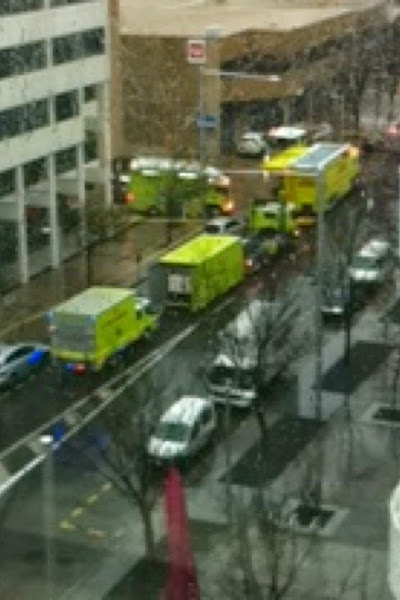 The police have sent a sample for testing:

#Suspiciouspackage #Civic A sample of the suspicious powder has been taken for analysis. No ETA on results as yet.

And word in from the police now that it’s all over and OK:

ACT Policing is investigating a suspicious package located at the Post Office on the corner of Alinga and Moore Streets in Civic this morning (Friday July, 19).

About 8.15am, ACT Policing received the report of the suspicious package containing a powder.

ACT Policing provided a coordinated response with the ACT Fire & Rescue HAZMAT team and cordoned the area as a standard safety precaution. Police restricted access to the Post Office and implemented road closures on the eastbound lane of Alinga Street and the southbound lane of Moore Street.

All this drama over a bit of talcum powder. How many thousands of dollars of public money was wasted on deploying police and fire brigade resources, while someone’s house could be burning down or the police were needed for something genuinely urgent?? Who’s going to foot the bill??

All this drama over a bit of talcum powder. How many thousands of dollars of public money was wasted on deploying police and fire brigade resources, while someone’s house could be burning down or the police were needed for something genuinely urgent?? Who’s going to foot the bill??

I have white powder in my laundry, should I make a song and dance about it?

I wish the idiot with way too much time on their hands,creating mischief,would just bugger off and stop wasting everyone’s time…

All clear, surprise, surprise. What a big waste of everyone’s time, though I suppose it’s better to be safe than sorry.

So, wonder if it was someone doing a ‘Christmas in July’ promotion with fake snow in envelopes?

Errr, it’s demountable and can be left on site.

In all sorts of ways it’s preferable to break the linkage between the payload and the haulage.

If you’ve got a fleet of packages containerised you need far less if you can slap them on any truck in the fleet.

Now that’s got to be the ultimate Spotto.

Did someone break one of those compact fluorescent lights?

who wants the day of work again. sprinkle some of this around

Jolimont Centre is also blocked off, and there is tape all around the bottom of the Optus building as well.

Sophia Harris - 9 hours ago
Jimena Medway these wasps have nothing against Dad View
Karen Hardy - 11 hours ago
Helen Stafford WHAT DID I TELL YOU View
Acton - 20 hours ago
I use a trap which is effective in catching individual wasps and discourages nesting. The trap uses a European wasp attractan... View
Community 5

mickos - 13 hours ago
No such thing as pro-active policing ,only reactive policing thanx to the ACT 'government' that's never given a damn about la... View
Food & Wine 1

bikhet - 15 hours ago
Nah. Got common grass skinks and marbled geckos though. Got another type of gecko too but haven't been able to identify it. View
DJA - 16 hours ago
Don't see any blueys in the backyard, but do see dragons (I think they are jacky dragons) and cunningham skinks. View
News 15

John Beagle - 20 hours ago
100% correct Gordon. The toilets are a disgrace. They appear to be the original 1999 edition, and the only illumination is on... View
Opinion 54