Who is Canberra’s Batman? 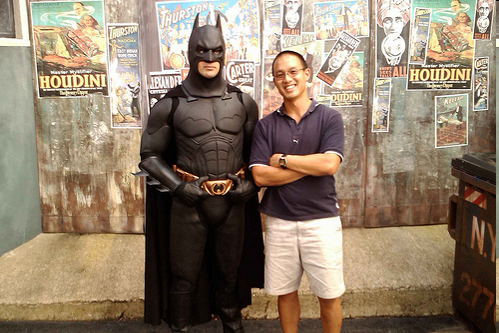 I ask this question, not in search of a vigilante to save our city from ruin, but rather to consider what heroism, villainy and justice might mean in the nation’s capital. One could achieve the same thing by substituting Batman with Wonder Woman, Wolverine or a ninja turtle. But the caped crusader is particularly instructive and more realistic because he has neither super powers nor mutant abilities. Like all of us, he’s the product of individual resolve and fateful circumstance.

Such questions are especially worth asking in an ACT and Federal election year when our leaders compete to rule over us. However, Batman stands in stark contrast to politicians because he doesn’t seek public office, glory or the limelight.

Instead, the Dark Knight is driven by duty. His soul and sense of being are bound to the city. He cannot be at peace until it is prosperous and secure.

Bruce Wayne, as the son of Gotham, regards it as his sacred birthright and enduring responsibility. We cannot know Batman without also knowing that Bruce’s parents were murdered, leaving him with a hefty inheritance, a loyal butler and a yearning for revenge.

No doubt Canberra’s mythical Batman suffered a great loss and injustice in his formative years that left him emotionally riven and alone.

At some point during his adolescence the young Canberran came to not only conquer his isolation, but embrace it. Soon afterwards he turned his fears into conviction and his vulnerability into strength. On a wintry day, he skipped school (probably Grammar, maybe Radford) and cast himself into the Namadgi wilderness or perhaps somewhere just beyond Mulligan’s Flat. He was harassed by wild dogs and pigs, but eventually learned to tame both them and his inner turmoil.

He re-emerged as the ACT’s Dark Knight.

Whatever was left of the young man’s existing identity became a mask that he dons in the day so that he can protect us at night.

Living in Canberra, he does not battle ruthless gangsters and super villains, but rather he fights small ‘c’ corruption: unions thugs who muscle their way onto building sites; slack and indulgent officials with constantly conflicting interests; managers who bully and intimidate workers; chief executives who talk of reform and renewal as they slash jobs and reduce entitlements; companies that exploit and underpay international students; out of control property developers and their lackeys in politics.

His objective is to turn chaos into order and to help Canberrans believe in themselves and in one another. They need not cherish or believe in him; in fact, he would prefer it if they didn’t.

Canberra’s Batman promotes democracy and the rule of law for others. However, he is no democrat and considers it necessary at times for him and him alone to break the law in the name of justice and to keep us safe.

He sits above us and knows what’s best, having faith in our basic goodness, while being frustrated at how wanton and weak we usually are. Batman is acutely aware of how we get duped and in turn dupe others, how we become fixated with poker machines and football betting, how we binge drink, how we look away when a fellow Canberran is assaulted or abused, how we race through roundabouts and dump junk at charity bins. Yet he still gives his all for the city.

Batman is not one of us. He may not even exist. But we can still call upon him to help us learn about ourselves and inspire us to be heroic.

Are you or do you know Canberra’s Batman, Batwoman or the Joker? Who is your local superhero? What diabolical evils have beset the ACT? How might we confront and combat them?

Kim Huynh teaches international relations at the ANU. You can find out more about the politics and philosophy of Batman here. http://cass.anu.edu.au/students-schools-centres-news/news/20160512/anu-lecturer-dons-costume-argues-batman-philosopher-king

6 Responses to Who is Canberra’s Batman?
Filter
Showing only Website comments

And Dungers – don’t even attempt to try to defend Seselja. How does a Liberal candidate think it appropriate to white-ant the building of a gas-fired powerplant next to the tip together with a datacentre and all the local economic benefits and jobs that would have created? He’s a dud.

If batman lived in Canberra he moved, couldn’t afford the rates.

And vehicle registration and paid parking for the Bat-car would be prohibitive, the heritage people would evict him from his cave etc.
Quick, to the Bat-poles, Robin!

If batman lived in Canberra he moved, couldn’t afford the rates.

But remembering your earlier post about Australian sport and society.

Batman is a white male who’s standards of fair play and proper conduct are racialised and his standards apply to everyone, but are skewed towards whites and against non-whites.

From Zed Seselja’s website: “He entered politics to create a better future for his children and all Canberrans… He believes that Government and the community have a fundamental duty to look after their most vulnerable citizens.”

There’s a Batman if ever I saw one. Also, like Batman, it’s total fiction.

The masses love fiction then as Hollywood keeps making Batman movies and you obviously watch them.
Zed was referring to ratepayers as our most vulnerable citizens and the masses would agree with that too.

From Zed Seselja’s website: “He entered politics to create a better future for his children and all Canberrans… He believes that Government and the community have a fundamental duty to look after their most vulnerable citizens.”

There’s a Batman if ever I saw one. Also, like Batman, it’s total fiction.

Ol L - 15 hours ago
Maybe if we do nothing another government will be in power when it all blows up, so let’s do nothing in the meantime View
Ashley Wright - 15 hours ago
Sally Greenaway found the article. https://www.cityservices.act.gov.au/roads-and-paths/traffic/trafficsignals/drakeford_drive... View
Ashley Wright - 16 hours ago
Sally Greenaway as I said above they actually do that and have done so for a good 30 years. They use a system called SCATs th... View
show more show less
*Results are based on activity within last 7 days

Strongman who endured the greatest test to talk about surviving PTSD