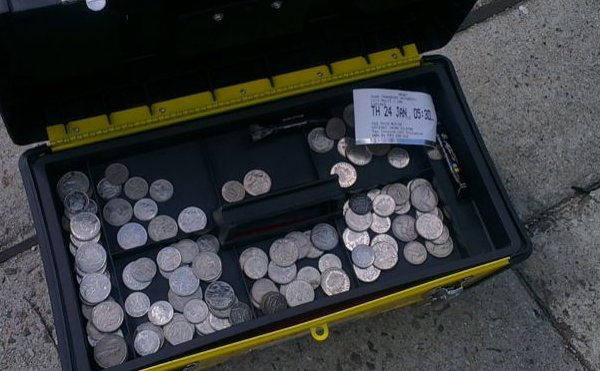 Sent in by Overheard.

From yesterday. Glad I play in a lads card group and have lots of spare change. This added a bit onto my commute yesterday.

It really should be in the “Only in Canberra” part of “Like Canberra”. 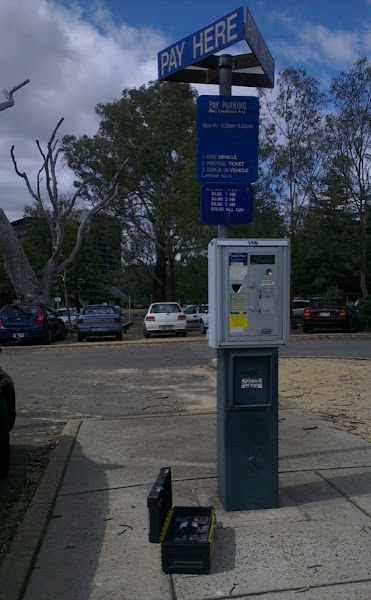 33 Responses to Who’s got $13.50 in loose change for parking?
Filter
Showing only Website comments

It is cheap as sh*t compared to Sydney. There are places in the Sydney CBD where $11 per hour is unheard of, let alone for the whole day.

The missus loves hers and it’s payed for itself 3 times over already. Paid extra

+1
Except if the bike is anything over 250cc, rego is a whopping big $860+??? [why doesn’t a 5L V8 cost twice as much to register than a Hyundai Getz? This argument for another day] It’s also fun to go from 0 – 60 in 2 seconds. 900cc and 4.5L/100km. I’ve had my bike for 3 months and saved $720 compared to the ‘ol 4×4, just in fuel. Then there’s the $600 in parking. That’s half what the bike cost. In another 3 months I’ll be making money and still laughing at everyone trying to dodge the parking inspectors, wading through purses looking for shrapnel and walking for miles.

How much of that $13.50 a day goes into servicing the machines maintaining the pricing displays patrolling for illegal parking, sending out notices.

On the consumer side that $13 comes out of retailers and store spending, not to mention the extra cost to keep all those extra coins in circulation.

Wait till those city developments go up parking will be $30 a day, Canberra will nosedive as it won’t be affordable the low income earners will go on the doll and all the retail staff will go to actual cities with proper infrastructure.

Fyshwick. Loaded to the gunwhales with sex shops, whores, pimps and free parking. Can’t beat it. 🙂

So what you are saying is that you’re not there for the free parking as such?

The missus loves hers and it’s payed for itself 3 times over already. Paid extra

Fyshwick. Loaded to the gunwhales with sex shops, whores, pimps and free parking. Can’t beat it. 🙂

Wasn’t it an election commitment from both parties that they would introduce machines that accepted cards as well as coins?

And yeah, bring on paid parking in the triangle.

I did some work in a building in Sydney recently, the charge for 8+ hours parking was $187, but they had a special early bird price of $65. Fortunately I was allocated a place in their loading dock. Wish I got a pic of the prices.

You need to look at this from the government’s point of view.

There is nothing in it for them except if they do it just before next elections, which I guess is how long it will take

Yeah, but then the pollie’s and their assistants would have to start paying to park like the rest of us common folk.

And yeah, anytime our good admin people would like to add card/prepay facilities to every municipal carpark, you could measure the productivity improvements like one of those financial charts they have on the 7 O’Clock news and we could give the GFC a kick in its HSA.

For the record, I normally am one of those annoying types that parks outside Finance/Treasury/Questacon in Parkes and walks across the bridge so my parking is $0 on those days. (‘Annoying’ for those poor people — like I once was — who work in the Parliamentary Triangle, started at all sorts of bizarro hours, and had to sacrifice my first born every time to get a decent park. Worked there in the last hit for 16 months and only got one parking ticket which is pretty good batting.)

If I haven’t got my ship together and do have to park in town, it’s usually underneath the new uni lodge building for $9 undercover all day. Sweet deal. UNLESS you want to leave before 4.30pm or after 7.00pm and for some strange reason it reverts to the full $15.

OR $10 at the tippy top of City West. But that does involve a lot of dizzy up and down the levels and my Econovan a) used to be a van band for two German pop-cabaret performers, so it’s been well-loved (in more ways than one — she’s due to give birth bout now); and, b) handles like an arthritic, half-blind, alocholic heifer — bumps into lots of things, mostly those orange traffic cones that abound on the tighter turns.

Yesterday was a sinfully late start to the day so I went for the path of least resistance, the road of least walkdownatude, and the avenue of leafy roadworks across the road from work, and hence had to pay the city’s coffers from next month’s blackjack stakes.

joipers – I couldn’t afford $13.50 a day. If I did have to work in the city – i’d park on the south side of the lake like all the other scabby folk and walk in .

Which then raises the point – why is there no pay parking in the triangle. Bring it in at say 60% of Civic Parking costs so $8 a day, and voila, your carparking issues will be solved!

joipers – I couldn’t afford $13.50 a day. If I did have to work in the city – i’d park on the south side of the lake like all the other scabby folk and walk in .

I recommend buying a 2 week permit. It’s a bit of a pain to order with the government’s archaic system forcing 7 days before (when it arrives in 2 days), and easy enough with a routine and calendar reminders. It’s is easier to factor in holidays and also a cheaper daily rate than most of the others, but I won’t say why as they might change it.

It’s hilarious, isn’t it? If you can stand the messing about, weekly tickets are even better value at exactly half the price of the two week ticket.

Teagan Erin - 3 hours ago
Shelby inside anu residences 😂😂 View
Billy Fox - 3 hours ago
Emma-Lee Louise Campbell scoot crew View
Chris Sherlock - 17 hours ago
Jorge Gatica i suppose you’re one of those people who thinks that road levies pay for roads. You know it all goes into the... View
Opinion 92

Frances Jane - 4 hours ago
Dan Backhouse I'm virtually vegetarian, and have been vegan at times, but found the article to be outdated. Perhaps it's the... View
Jannah Fahiz - 9 hours ago
Oh my god. These comments are wild! Thank you for a good read RiotACT :) View
Geoff Langridge - 11 hours ago
Dean Newman okay now youve just gone feelings over facts. View
Food & Wine 10

UPDATED 12:20 pm: The frantic efforts of neighbours and emergency services were not enough to save a 70-year-old woman who died...
News 0

Garbage truck drivers and their union have agreed to a 10.2 per cent pay rise over the next three-and-a-half years...
Property 1

We're all in this together. That's been the mantra for 2020 - the year that's brought almost every catastrophe to...
News 27

If you are looking for a restaurant to celebrate that special occasion, then you have come to the right place!...
Community 44

As COVID-stranded travellers continue to return home, Canberra is doing its bit by taking two planeloads of returnees this week....
Lifestyle 19