‘Why are we waiting?’, ask Libs, after NSW bumps hospitality limit to 50 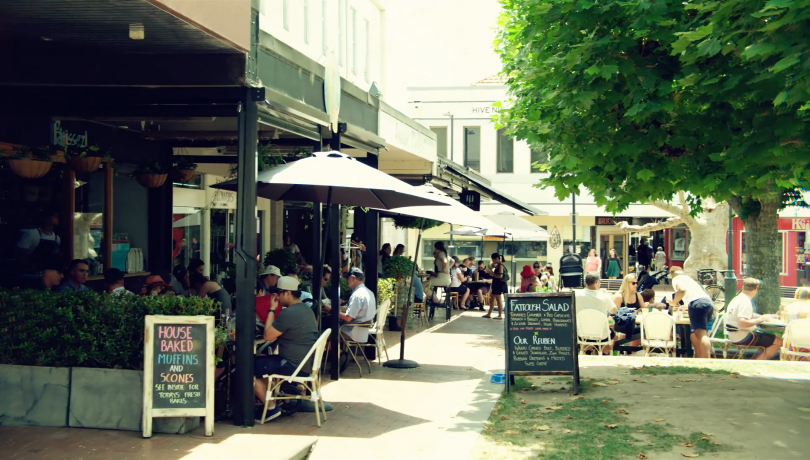 As COVID-19 fears subside, cafes, pubs and restaurants may soon be back in business, under certain conditions. Photo: File.

The Canberra Liberals are asking ‘why wait?’, but it’s likely the ACT will follow NSW in easing restrictions on pubs, cafes and restaurants and then some after National Cabinet meets next Tuesday.

NSW Premier Gladys Berejiklian says venues will be able to serve up to 50 people at a time from 1 June as coronavirus cases in NSW continue to decline.

Under the new measures, hospitality venues will be required to adhere to strict guidelines to operate, including each patron having at least four-square-metres of space, bookings of no more than 10 people, no patrons allowed to stand, mingle or dance, and shared cutlery and buffets will be banned.

“As the Chief Minister frequently states, Canberra is an island within NSW,” Mr Coe said.

“Now that the NSW Government is allowing their pubs, clubs and restaurants to operate in a COVID-safe environment, Canberra’s hospitality sector should also have the opportunity to operate at greater capacity where safe to do so.

Chief Minister Andrew Barr said the government had already indicated that it would be easing restrictions from 29 May subject to health advice.

”Cabinet will be meeting on Tuesday 26 May, where the easing of restrictions for the Territory, based on health advice, will be considered,” he said.

”Our intention is to make a comprehensive announcement next week so that everyone knows where they stand from 30 May and what the decision points will be after that.”

Mr Barr said a consideration was the impact that maximum gathering numbers would have on various industries that are currently restricted, and not just the hospitality sector.

”This includes indoor fitness, community sport, cultural institutions and entertainment venues such as cinemas,” he said.

Mr Coe said the Canberra Liberals had put forward options for the ACT Government to urgently adopt, including requiring venues to implement a minimum of 1.5 metres between dining groups; limiting the number of patrons (to 10 or 20) in a dedicated or enclosed area; and/or limiting patronage to a percentage of current occupancy (for example, 30 per cent of current occupancy building up to 100 per cent).

“As the Canberra Liberals have repeatedly stated, the ACT is uniquely positioned to have a flexible and targeted approach to safely reopen Canberra’s cafes and restaurants,” he said.

“The key principle to reopening our local economy is keeping people safe through social distancing and appropriate hygiene.”

3 Responses to ‘Why are we waiting?’, ask Libs, after NSW bumps hospitality limit to 50
Filter
Showing only Website comments

What a pack of fools. Trying to play politics when it just isn’t needed.

I have no doubt what so ever if the government follow immediately after NSW the Libs would be saying they are creating policy on the run, if they wait like they are then it’s not fast enough. It is nonsense like this that gives Labor a hope at the next ACT election.

Gotta love the Canberra Liberals and Alistair playing student politics with Canberrans best interests at heart, demanding that the government just reopen everything despite health advice not to. NSW has the highest number of confirmed cases standing at 3,084, 48 deaths and 3 new cases overnight and the Feds and Gladys are demanding that all the states reopen their borders. Let’s not forget Gladys’s handling of the Ruby Princess .

“Men, it has been well said, think in herds; it will be seen that they go mad in herds, while they only recover their senses slowly, and one by one.” A quote from Extraordinary Popular Delusions and the Madness of Crowds (1841) and just as applicable now.

Sophia Harris - 2 hours ago
Jimena Medway these wasps have nothing against Dad View
Karen Hardy - 4 hours ago
Helen Stafford WHAT DID I TELL YOU View
Acton - 14 hours ago
I use a trap which is effective in catching individual wasps and discourages nesting. The trap uses a European wasp attractan... View
Community 5

mickos - 6 hours ago
No such thing as pro-active policing ,only reactive policing thanx to the ACT 'government' that's never given a damn about la... View
Food & Wine 1

MERC600 - 7 hours ago
Always good to see a new industry opening up in the region, although I didn't have a clue where Capricorn park was. So did a... View
Lifestyle 2

bikhet - 8 hours ago
Nah. Got common grass skinks and marbled geckos though. Got another type of gecko too but haven't been able to identify it. View
DJA - 9 hours ago
Don't see any blueys in the backyard, but do see dragons (I think they are jacky dragons) and cunningham skinks. View
News 15

Michael Ilsley - 12 hours ago
How lucky are those children going to be being taught by such an incredible person. View
Rhonda Maxwell - 16 hours ago
Brad is an amazing young fella who is living a full life. His family and friends are s wonderful support as is his footy team... View
Pam Perkins - 16 hours ago
A very inspiring young man all the best in all your future endeavours and wonderful community support... View
Community 11

John Beagle - 13 hours ago
100% correct Gordon. The toilets are a disgrace. They appear to be the original 1999 edition, and the only illumination is on... View
Opinion 54

JC - 15 hours ago
It was a private facility unlike those in Kambah which you describe. The only fault of Government here is that they have let... View
Community 8

Stop the exodus to NSW – just move the border

@The_RiotACT @The_RiotACT
RiotACT’s weekly newsletter brings you a regular dose of free local news so that you never miss out on the big Canberra stories and conversations https://t.co/tXZol5UP6u (3 hours ago)

@The_RiotACT @The_RiotACT
Local sport survives thanks to the dedication of volunteers. After decades with @NetballACT, including helping it survive insolvency in 2017-18 and then COVID-19, Louise Bilston has called time - although the passion remains https://t.co/uWx1fICLyo (4 hours ago)

@The_RiotACT @The_RiotACT
Documentary that tells the story of the Queanbeyan family behind Bell’s Amusements has been shortlisted for SBS’s Australia Uncovered series https://t.co/5wpvXyloYp (6 hours ago)