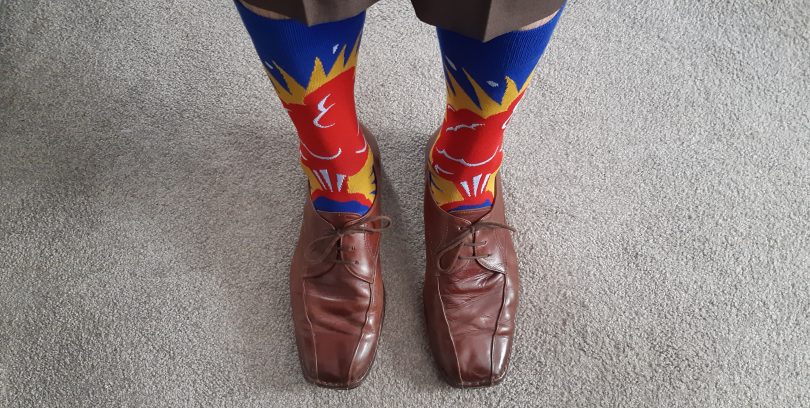 These are the socks that Jonathan McGuane will be wearing tomorrow.

Canberrans visiting a GP or one of the local hospitals this Friday may be forgiven for thinking that their doctor was starting to ‘lose it’ when they glance down at their footwear. In fact, they are going quirky for a cause.

Friday 7th June is Crazy Socks 4 Docs day. It’s an annual event where doctors across Australia and the globe recognise, reflect on, and raise awareness of mental illness in the medical community by wearing odd or brightly patterned socks.

While not traditionally thought of as a vulnerable group, doctors (especially those in the early years of training) are in fact at significantly heightened risk of mental illness and suicide.

This situation is even worse for women, who – in a reversal of the wider societal trend – commit suicide at a 60 per cent higher rate than their male counterparts.

The reasons behind these awful statistics are multifactorial. One is likely to be the increased availability of lethal means and/or understanding the physiology of their implementation.

With respect to female doctors, the factors that predispose to depression and/or suicidal behaviour disproportionately affect women, including but not limited to family/domestic violence, sexual assault, childhood sexual abuse, workplace discrimination, the gender pay gap and associated financial insecurity, and shouldering most of the burden of care of children and the elderly. Alcohol abuse by male partners should also be recognised as a contributor, as is a workplace culture of bullying and sexual harassment. 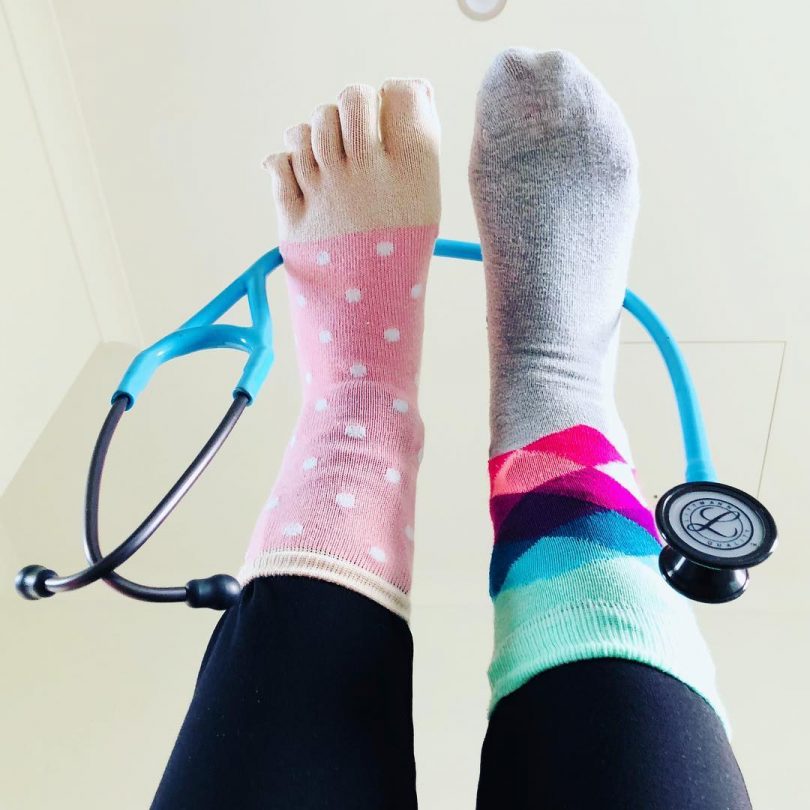 Flexibility in career structures and working hours, appropriate development opportunities for aspiring female doctors, programs that address the well-being of doctors-in-training, and de-penalising mental ill-health within doctors’ ranks must all be part of the solution to this problem.

President of the ANU Medical Students Society Cathryn Youings has been organising a campaign for crazy sock day to encourage medical students and doctors across the territory to wear crazy socks to raise awareness for mental health.

“Being a junior doctor is quite a transition. There is a higher workload and you are taking care of people who are really sick and sometimes that can be really distressing,” she shared. “Doctors and medical students really like to put on a brave face and look stoic in front of patients.

“It is time that we care for the carers and we hope this campaign will start conversations about mental health.”

As a nation, we should not accept the loss of any more young doctors-in-training to suicide (especially women, given emerging evidence that patients have better outcomes when treated by a female doctor compared to a male doctor).

Unfortunately, the difficult but rewarding career path of medicine seems to be much harder to walk if you happen to have two X chromosomes rather than an X and a Y – given the male domination of medical leadership in Australia, it falls squarely to those of us in the latter category to change that.

Yes, doctors are well-paid and enjoy a high level of respect in the community, but they also work long hours in intellectually, physically, and emotionally-demanding roles.

So if on Friday you find your doctor to be a little frazzled, unexpectedly curt, or perhaps just somewhat distracted, remember that doctors are humans too, and everyone goes a little crazy sometimes.

Jonathan McGuane is a final year medical student at the Australian National University who plans to do his internship at The Canberra Hospital next year. He holds a PhD from the University of Melbourne and previously worked as a research scientist in the area of women’s health. He is a proud husband and father of two boys and looks after his mental health through exercise and busking at Dickson shopping centre.

Bill Gemmell - 3 minutes ago
Barbara Eglitis I was wondering how long it would take. Seriously, I had the Fowles St Park project in Weston in mind. Sugges... View
Barbara Eglitis - 8 minutes ago
Naturally occurring weeds, like the ones growing down the middle of Northbourne Avenue which looks disgusting??? View
Mark Slater - 24 minutes ago
Angie Drake The simple answer is, buy more mowers or employ more staff. It's not hard. View
Opinion 11

Acton - 16 minutes ago
The money you are giving out of misplaced guilt to a street beggar is just funding their drug, smokes and/or booze addiction.... View
Mike of Canberra - 1 hour ago
So the problem with Jobseeker is that it’s insufficient for its recipients to live on. Well guess what folks - it’s not m... View
margaret pender - 4 hours ago
Great article, thank you, Zoya Patel. Recently, SBS ran a series about 3 people who tried to live on JobSeeker allowance for... View
Public Sector 172

Finagen_Freeman - 4 hours ago
So sad for family and friends. View
News 10

Linda Stapleton - 6 hours ago
I see the tram is already being blamed for this issue ... great to see some people have a one track mind. It makes it easy to... View
News 6

Linda Stapleton - 6 hours ago
I may no longer be a young woman but can I just say I have yet to meet one woman who has NOT been sexually harrassed or assua... View
Linda Stapleton - 7 hours ago
Katrina Patch yes I also query this View
Phyllis Hynes - 8 hours ago
You might want to redo that report. Way more!!!... View
Property 5

Tim Flederis - 6 hours ago
Josh Reid where you at ? View
Paul Mathews - 7 hours ago
did they sell any houses with BARKING DOGS, eh Chris ? View
Business 4

Capital Retro - 9 hours ago
That $4125 tax-payer funded rebate is a dead loss too. View
show more show less
*Results are based on activity within last 7 days

The days of nine to five, five days a week at the office are over for ACT Government public servants...
Community 138

@the_riotact @The_RiotACT
#Construction businesses are being urged to assess their financial position as they try to complete projects in the face of #supply chain disruptions in the lead up to Christmas https://t.co/0FbZn6Et0G (53 minutes ago)

@the_riotact @The_RiotACT
Across Australia, COVID-19 has increased awareness and support for better #humanrights protections. ACT Human Rights Commissioner Dr Helen Watchirs argues now is the time for the Human #Rights Act to be amended to include a complaints mechanism https://t.co/XAXx7nMy8S (3 hours ago)