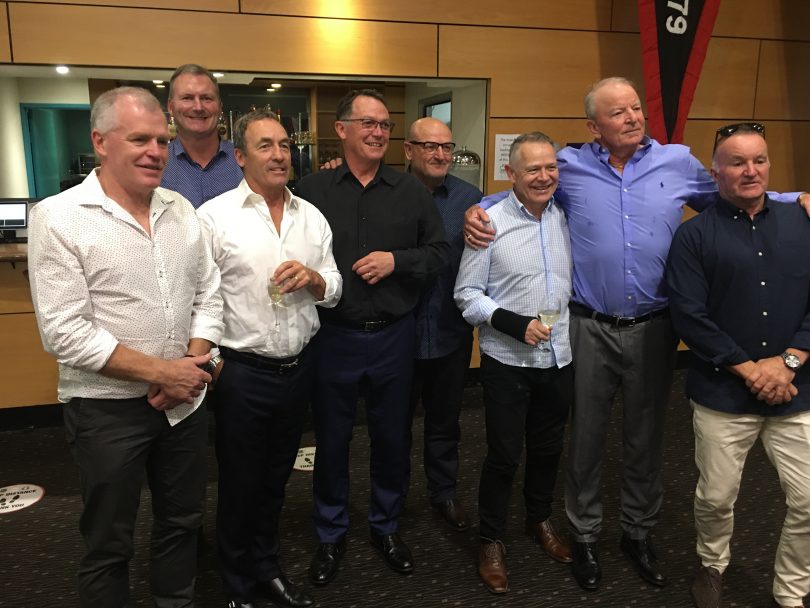 As testimonial lunches go, this one was special, honouring a coach who had not only taken his club to six premierships but also helped develop boys into young men along the way.

These days, there is such a focus on mental health and assisting youth, particularly to find their way, that we often forget the role that sports clubs can play in the ‘coming of age’ development process.

For sports clubs to be regarded as life-changing environments, leadership characteristics, as well as people management skills within the club, are necessary. These qualities sit alongside sports skills as important to sports organisations, and most successful sports clubs in Canberra have these personalities; people capable of getting the best out of individuals on their watch.

For 14 years, the Ainslie Football Club had Chris Rourke, who prior to coming to Canberra had been at more clubs than Col Joye.

Ian Muir, Ainslie Football Club president from 2006 to 2016, remembers well when Chris Rourke joined the Club: “When Chris arrived in Canberra, he and I knew that we were going to be in for a bit of a tough ride the first few years.

“The new board at the time had set a direction with our Strategic Plan of 2007. The underlying message in that plan was ‘culture’. We set about drawing the right people to the club – not selling them a dream but sitting down with them and involving them in conversations about the type of club we wanted to have moving forward. The players started to buy into this mainly due to Chris’s great leadership, care and incredible enthusiasm and resilience.”

Rourkey, as he is affectionately known, played a bit in the VFL and the VFA, and was then involved with coaching at six clubs, by my count, after that.

Last year though, he said he’d had enough; he was feeling burnt out.

As well as coaching and everything that comes with it, Rourkey was doing his best to keep things intact as his wife Julie battled lung cancer.

Julie passed away late last year, not long after Chris had coached Ainslie for the final time. 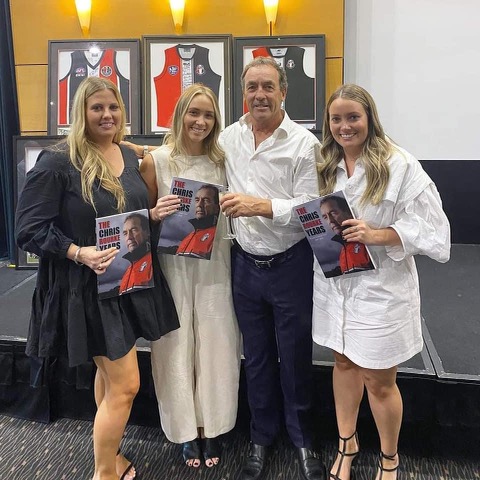 Rourkey is an emotional bloke, and this came to the surface when he was honoured in late April in a testimonial for his contribution to Ainslie Football Club.

I was privileged to MC the event, where former teammates, players, rival players and coaches, along with cameos from his brother and sister, dug up stories and accounts that light-heartedly built a picture of Chris Rourke.

What came through were his people management skills and also his ability to unsettle others with his forthright views, particularly when applied to anybody in league administration.

The only time emotion seemed to surface was when there was praise from one of the many panellists on the day or when Chris started talking about his family, particularly his daughters.

Every player who came under Chris’ charge seemed to be regarded as family. This was evident throughout the night.

One clear example that stands out was when Chris was presented with a book on his time at Ainslie, written by the late Lyndon Hirst and his son Jeremy Hirst. A copy of the publication was auctioned off, and one of Rourkey’s former players paid several thousand dollars for a hardcover copy. 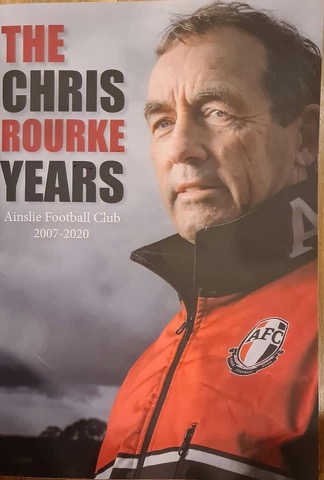 The Chris Rourke Years by the late Lyndon Hirst and his son Jeremy Hirst. Photo: Supplied.

He was a gift to Canberra sports media during his 14 years in charge – nothing was off-limits.

Under Chris Rourke’s coaching, Ainslie won the 2010 premiership against Eastlake. In 2011, under the new North East Australian Football League (NEAFL) competition arrangements, Ainslie played in the NEAFL Eastern Conference comprising ACT and Sydney teams. Ainslie defeated the Sydney Swans in the Grand Final that year to take out the Eastern Conference title.

Again in 2016, after returning to the Canberra-based competition, Ainslie won the AFL Canberra First Grade Premiership against Queanbeyan.

It was fitting that he was given a testimonial, and was honoured by people travelling from all over Australia. But it was not just the premierships that drew people to celebrate Chris Rourke’s contribution to Ainslie Football Club and the AFL more broadly, it was his contribution to the environment of a sports club. His leadership and people management skills that make for lifelong connections and friendships.

As club president Ian Muir aptly says: “Rourkey is a great mate for life. He has taken our club to a place where we can be so very proud of our standing in the community. He is a great leader, a great coach, a great husband and father. He is, in my eyes, the greatest ever coach in our great club’s history. Fourteen years, six premierships, and he developed and nurtured everyone that came across his path in all facets of our football club.”

What a great bloke – had the privilege of being coached by Rourkey at North Shore Bombers in Sydney before he moved to Ainslie, dead set legend is this man. Three cheers!

JC - 7 hours ago
Problem with the medical world is balance or probabilities doesn’t cut it. How many times do you read of people who have be... View
JC - 7 hours ago
The only problem with your theory and quoting the average age of deaths, is those deaths have happened in an environment of r... View
phydeaux - 10 hours ago
While reading here, I noticed that among the usual weird facebook views there was a journal reference, so I looked it up. Dea... View
News 39