Why Floriade is arse

Once upon a time there was a flower festival, in spring people could go to Commonwealth Park, see some beds of tulips, and go home feeling somewhat enriched for a few hours spent smelling the flowers. As time went on commercial activity moved in selling things to all the people. And now it’s a second show with milling hordes and more square metres of marquis space filled with fudge and soap sellers than flower beds. 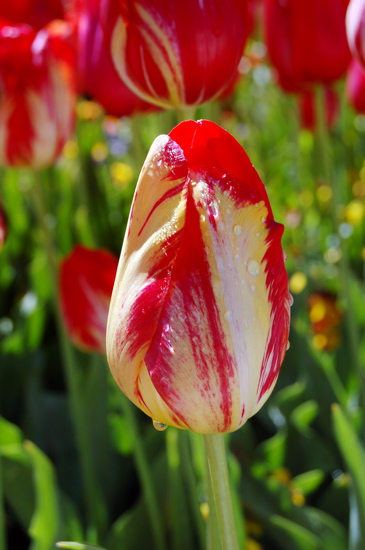 If anything it’s a camera show as world+dog trots out their latest digital toy and blocks the heaving pathways trying to get their special shot. 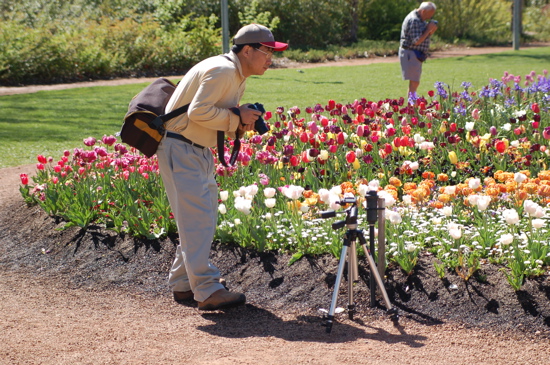 With a large number of the remaining flower beds sponsored by third parties, particularly embassies, there doesn’t seem to be any unifying theme at all. The “Carnival” theme this year basically lets them slap any old crap wherever they want it. Here the Spanish Embassy’s contribution has an incongruous wooden galleon plonked into the middle of the flower bed with it’s sails luffed, symbolically going backwards if you will. 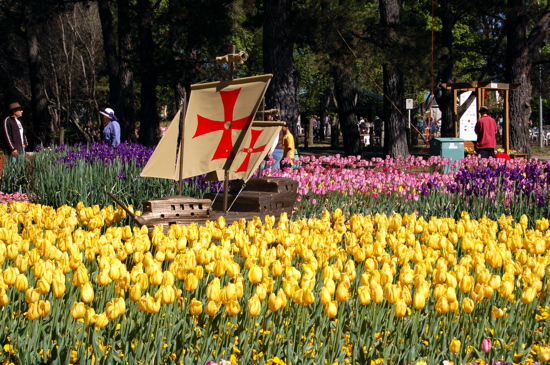 Possibly of greatest interest amongst the maddening throng is a very active beehive buzzing away in the roots of one the trees in front of Stage 88, let’s hope no-one with allergies upsets the bees. 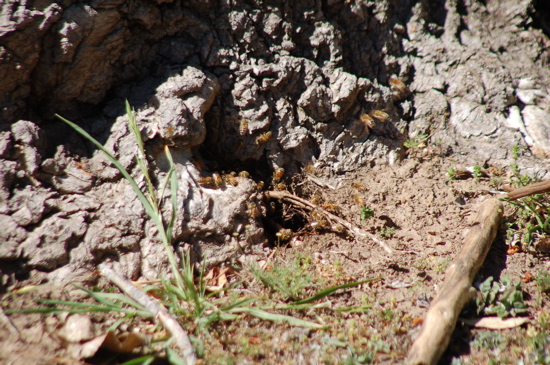 [Photos by Kerces who wanted a credit]

Heavs…who was the lucky guy???

Miz, they are certainly bees in that photo. Bees are a pale yellow on account of all that fuzz, European wasps are much longer for the width and a very very striking yellow.

Had a nest in my roof last season. Freaky little bastards.

I’ve never been but I think its a good thing. For instance, walking to work this morning I overheard some out of towners talking about going ‘back’ to Floriade again.

i love it too!

I love it. It’s the one good, free thing left in Canberra. I pack stuff for us to eat and drink, spend nothing on the assorted crapola ‘cos I can’t afford it, and will boycott it again if they bring back the entry fee.

Pics are lovely Kerces. (Aren’t the insects in the photo European Wasps? they look a bit big and yellow for bees, and they are nesting in the ground . . .?).

I had sex in the bushes when they had floriade at night a few years back. That was the only good part of the whole trip.

The buskers made it worthwhile. If not for the thronging crowds they attract. As long as they don’t go on and on in between tricks. And they don’t do their thing too close to the footpath. Plus the guilt trips, enough with the performer poverty syndrome, the market chooses you or not.

….. so yeah, I guess the buskers made it worse.

Went there once. Saw flowers and sculptures. Paid through the nose for drinks and ice creams. Don’t think I’ll bother again.

bit over the world + dog and their respective cameras this weekend jb?

I was dragged along to Floriarse by the missus this year (I refused to go when it cost to get in), and we didn’t buy anything, looked at the flowers then went home. It was an ok excuse to take the son out for a play in the sunshine, but it didn’t really float my boat.

scrap floriade and bring back the gmc 400.

scrap floriade and spend the money on schools.

Belinda Spouncer - 56 minutes ago
Staff should be allowed to work from home at least one day of week its a win win for both the employee and employer. If nothi... View
Anne Atherton - 7 hours ago
For me it's not about working less but about working differently. I enjoy working from home and the flexibility it gives me.... View
News 23

Nikos Manikas - 2 hours ago
Dianne Latimer if Brisbane get a 2nd team then all Ch9 will do is alternate between the 2 Brisbane teams. just like now they... View
Food & Wine 128

Emma Jelbart - 4 hours ago
Meagan Kopatz I'm in Fraser and heard something like about the time you would have heard that bang (or boom?) in Kaleen. Agre... View
Opinion 37

Christopher Cuba Rabanal - 5 hours ago
We don’t put a price on people’s lives. This is the teachings of our great society and Nation. So let’s not start now. View
Carl Ostermann - 8 hours ago
Considering the fact that the ACT is surrounded by NSW and the border has to be open for surrounding towns, it is in our best... View
Amy Willmott - 11 hours ago
Nick Anderson Couldn’t agree with you more.... View
News 72

Kiosha Coleman - 7 hours ago
Craig Coleman does this help you View
chewy14 - 11 hours ago
What makes you think they don’t have a cost benefit study on this project? Have you asked for it? This is a major freight r... View
News 60

Annette Mckay - 9 hours ago
That's a shame Target has much better quality than Kmart. I don't shop in Kmart much because of the quality don't know where... View
News 5

John Moulis - 11 hours ago
Not much of a choice is it? A woman from Labor and a woman from the Liberals. And to think that people could have had the cha... View
show more show less
*Results are based on activity within last 7 days

The $200 million Monaro Highway upgrade is a step closer with the release of concept designs for a southbound flyover at the...
Community 128

The longstanding saga of Braidwood’s historic highway entry lined with golden and Lombardy poplar trees is progressing to the next...
Breaking 0

Mystery surrounds a loud bang heard early this morning in Belconnen and Gungahlin but it's not the first to be...
Community 128

@The_RiotACT @The_RiotACT
With more local businesses turning to home delivery each week, one of the latest is a big name in fruit & veg, Ziggys Fresh https://t.co/CbJxNYEY3y (5 hours ago)

@The_RiotACT @The_RiotACT
There's continued dissension at the top in Capital Football as an immediate past Board member says the organisation's behaviour has jeopardised a return to competition this year https://t.co/VC6ze6NRAL (6 hours ago)