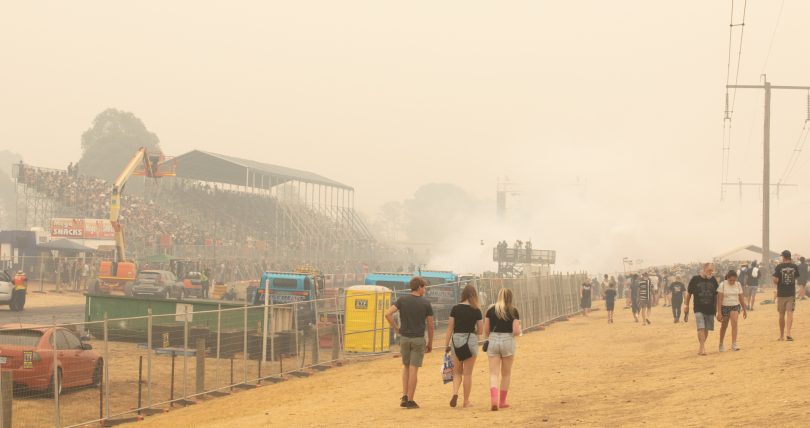 Summernats took place on the hottest day ever recorded in Canberra, 12 months ago. Photo: Region Media.

Heavy rainfall and low temperatures have hit the ACT as many return to work after their festive season break, a year on from the highest temperatures ever recorded in the Territory.

There were falls of up to 20 mm across the Territory today (4 January), and the ESA was called to several incidents including tree damage in Reid, Flynn, Charnwood and Griffith. The highest falls were recorded at Mt Ginnini and there were localised heavy falls across the Territory.

The Bureau of Meteorology’s duty forecaster said that rainfall and thunderstorms were widespread across an area stretching from Western NSW to the Hunter Valley, Sydney, Illawarra and South Coast.

The system is now beginning to move offshore as it reaches the coast.

“Canberra has seen some rainfall but there were heavier falls to the north,” the duty broadcaster said.

“There’s been a trough moving through NSW away from Canberra, and after that there will be a slow transition to more settled weather over the next few days.”

The weather will be more settled in Canberra towards the end of the week although there’s still potential for showers and potential thunderstorms over the next few days.

Saturday is expected to be a clear and sunny day with a maximum temperature of 31 degrees.

Temperatures for next week will range between 22 and 24 degrees. The weather will be mild but wet on Tuesday and Wednesday, and cloudier on Thursday, forecast to be partly cloudy with a maximum temperature of 22 degrees.

One year ago, on 4 January 2020, Canberrans sweltered through their hottest day on record, while smoke from the NSW bushfires pushed air quality well above hazardous levels.

The Air Quality Index in Florey hit 512 at 3:00 pm one year ago today, more than two-and-a-half times the hazardous threshold.

An hour later at 4:05 pm, the city set a new maximum of 43.5 degrees at Canberra Airport according to Bureau of Meteorology (BOM) data, which was more than a full degree higher than the predicted maximum of 42 degrees.

However, co-owner of Summernats Andy Lopez said organisers made sure that the event is safe for everyone.

“We have consulted with various agencies in government, both fire and health all the way through, and we are comfortable that we are able to proceed,” he told Region Media at the time.