Will we ever know who killed Colin Winchester? 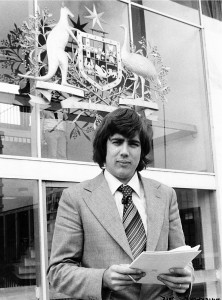 One of the longest and costliest legal sagas in the ACT, indeed Australian, legal history has come to an end with a not guilty verdict for David Eastman in the Supreme Court. But it seems more unlikely than ever that we’ll discover who murdered Assistant Commissioner Colin Winchester in a Deakin driveway almost 30 years ago to the day.

Veteran ACT newsman and former Canberra Times editor Jack Waterford was at the scene on the night of the shooting, and his doubts about the case began soon afterwards, escalating through the first trial and Eastman’s murder conviction.

“Eastman is a difficult, tricky, abusive and abrasive character and a lot of the bad press about him was true but I thought police jumped far too quickly to the conclusion he was a mad nutter who’d obviously done it. The same policeman who’d told me on the night that it was a professional hit job – what they call a double tap – was saying it was an amateur job days later. I think there was confirmation bias, and tunnel vision focusing on Eastman far too early.”

Waterford says that Eastman was always his own worst enemy throughout his arrest, trial and conviction, and “the worst imaginable judge of where his best interests lay”, but adds that as a long-term observer, he has no doubt that the former Treasury official was “floridly mentally ill at the time. The police and justice system seemed to think he was putting it on. But I am convinced otherwise”.

But in addition, Waterford believes that the investigation and trial process itself was deeply flawed. “Evidence that seemed bit dodgy or speculative went into the trial, and was not, in my view, cross-examined or sufficiently qualified. I thought he may or may not be guilty but they didn’t prove it at the trial, which was a farce. I’ve stuck to that ever since.”

He’s also critical of the decision to go to retrial following the 2014 Martin enquiry, which simply recommended the original conviction be quashed. Waterford believes the retrial was politically motivated, pointing out that every year of the extended legal process has cost the ACT taxpayer dearly. The consequence of this extended legal drama must also mean that any chance of proving alternative scenarios, including the alleged Mafia link, is now almost hopeless.

Jack Waterford says there are still plenty of very sensitive issues at hand regarding potential Mafia involvement including the wellbeing of informants. “Witnesses have come to untimely and ‘deliberately truncated’ ends.”

“There are still juicy pieces of evidence pointing to the Mafia theory and people saying positively they know whodunnit, but I doubt you could ever prove anything now. I very much doubt you’ll find the murderer, so many years later and after so much mishandling of the case.”

He spoke to Eastman often over the years in common with many other longtime observers and expects he will receive compensation in due course. “He’s a difficult customer and they were hard years in jail.”

Finally, Waterford says that we all have a right to be satisfied that the machinery of justice has worked, particularly when the costs to the public purse have been so high. “This was a sensational case, where more money was spent than almost any other case in Australian criminal history. If they got it so badly wrong in that case, what is a person to think of a common or garden case?”

Do you think the Eastman case was bungled?

Two suspects have been discussed. They were allowed to return to Italy soon after the death where it is speculated they later died in crime related executions.

Police didn’t “swoop” on the Bungandore crop. That particular crop was harvested and sent down the Hume to Melbourne. However Victorian police, who were not in on the sting, arrested the perps… deeply angering (or so it is postulated) the Mafia figures who went on to have Winchester killed.

Look up the history of the late Gianfranco Tissone (Tizzone).

The “double tap” at close range is usually delivered by a handgun as well.

Do you mean “patsy”?

I think Jack pretty much nails it. The ‘double tap’ delivered so fast that the victim had no time to move is the obvious calling card of a professional killer. Given he left almost no forensic evidence, was not seen or heard by anybody and we’re looking at Day of the Jackal standard.
Yes the police botched it – but they were under intense pressure so it’s understandable they tried for a quick result ( which still took six years). It’s unfortunate the dud forensic evidence wasn’t exposed at his first appeal – that would have acquitted him very early on and they may have been a chance to catch the true killer.
As to who it was – well I’d send someone to Calabria and ask who the best hit man the n’Dragheta ever had was, because he would be a legend in their circles (probably long dead) – killed a top police officer, got away, and had some pasty serve 19 years for the crime!

Does anybody remember the court case a week before the shooting involving the Bungendore marihuana crop? The AFP’s star witness who was going to reveal about mafia involvement suddenly turned into a hostile witness and was shown on the TV news on two successive nights walking out of the court telling media he would not be testifying “because I will be minced meat if I do.”

One week later Winchester was shot. There had to be a connection there.

In this 2009 article, the Canberra suburb of Giralang gets an “honourable” mention.

Yes, there were many “connections” at that time.