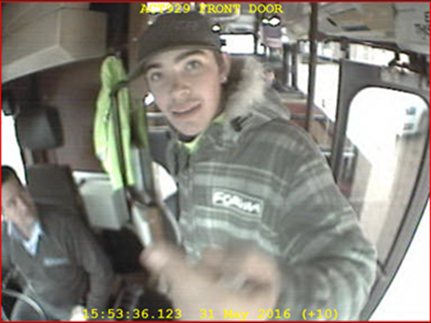 Police are seeking to identify an alleged offender after an ACTION bus driver was assaulted in Fyshwick earlier this year.

The alleged male offender assaulted the bus driver at about 4pm on Tuesday 31 May following a verbal confrontation, having refused to pay his fare.

He left the scene on Wollongong Street prior to the police’s arrival.

CCTV footage (above) shows the alleged offender, who is described as Caucasian in appearance, wearing a hooded jumper and a dark hat. The man also wears a stud earing in his left ear.

Police urge anyone who may have information or who witnessed the incident to contact Crime Stoppers on 1800 333 000, or via act.crimestoppers.com.au. Please quote reference 5967682. Information can be provided anonymously.

The crimes are reporting they found the bloke. A stern lecture coming up, possibly.

jam - 6 hours ago
The tram is more easily accessed by more people as it encourages dense development within its reach. It isn’t really possib... View
bj_ACT - 6 hours ago
The issues with the Bus route changes and the loss of bus stops for Tuggeranong in 2019 were obvious to anyone with half a br... View
Winkie Wee - 8 hours ago
I'm lucky in that I live within a short walk to either the R4 or R5 buses. I use the bus quite a bit unless both of us need t... View
Breaking 4

jam - 6 hours ago
That said, though, bikes are required to slow to around 10km/h before crossing - a bike crossing at the otherwise speed limit... View
jam - 6 hours ago
It is not “bugger all inconvenience” it actually makes a big difference when it is your commute! When I drive past a cros... View
liberalsocialist - 9 hours ago
What a disgrace. And while in no way taking away from this cowardly act, I have come from NSW where we are told to dismount a... View
News 161

Jimbo Lambert - 6 hours ago
Areas in Gungahlin haven't been mowed for at least 6 months! How hard is it to use our high rates money to employ some more m... View
Jimbo Lambert - 6 hours ago
Randy Goldberg you mean 6 months later? You must live in a more affluent area than Gungahlin, as it seems we have been alloca... View
Frank Arnold - 9 hours ago
Ohhh myyy Goddd !...Crooked pavements!...pot holes in our roads!...and now it's long grass !!!! FFS we hardly had any 3/4 yea... View
Community 6

kenbehrens - 9 hours ago
That makes no sense. Your comparisons are 20-25 years apart. The "new" bus route takes longer because it services a bigger ar... View
bj_ACT - 10 hours ago
Not sure about the adding 10 minutes to the 333 journey by changing to go past College St and UC. The change Only added 1.2km... View
michael quirk - 14 hours ago
Yes,but it is by no means certain that light rail stimulates urban redevelopment more than BRT. Much depends on design of the... View
News 1

rocca66 - 13 hours ago
I was staggered to think there could be 30,000 public service compensation claims. View
News 15