ACT Policing is seeking witnesses to an armed robbery which occurred in Calwell on Sunday night (February 15).

At about 9pm a male entered the Woolworths service station at the Calwell shopping centre, where he threatened a console operator with a large knife before fleeing with a sum of cash.

Shortly before this at around 8.50pm, a man was seen acting suspiciously around the McDonalds and Woolworths petrol station at the Lanyon Marketplace in Conder.

The man is described as Caucasian in appearance, aged in his 20s, with a skinny build. He was wearing a blue jumper with a grey hood, black tracksuit pants and carrying a black bumbag.

Police believe the man fled on foot to a waiting car, parked nearby in Roope Close, Calwell.

Police request anyone who may have seen this man or has any information that may assist the investigation to contact Crime Stoppers on 1800 333 000, or via www.act.crimestoppers.com.au. Information can be provided anonymously. 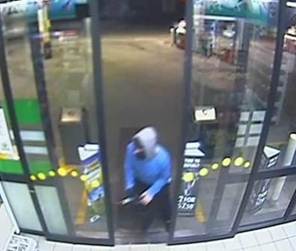 You see clearer pictures from the planet mars. Couldn’t they help the plod by installing better cameras. And the other thing that gets me is the cameras are up high, so the perp ( I’m hip on the lingo ) is hidden by the hoodie . Why not down eye level, hidden inside a empty something.

Nawaporn Posuwan - 9 hours ago
Merryn Orchard look very nice I should go there and try soon. View
Songchat Chatkeo - 11 hours ago
Awesome krub View
Merryn Orchard - 13 hours ago
Nawaporn I think you would be the best judge for me 😋 View
News 34

Sarah Jenkins - 15 hours ago
It was heavily ironic to see people baying for the cancellation of the NYE fireworks, and then to watch the same people less... View
Mark Oz - 15 hours ago
@Jim McMahon Actually they’ve been involved quite a bit for some time - https://the-riotact.com/act-firefighters-deploy-as-... View
Chris Lenihan - 17 hours ago
Wayne Mccauley exactly Wayne Hats off to all the awesome fire fighters at Summernats... View
News 3