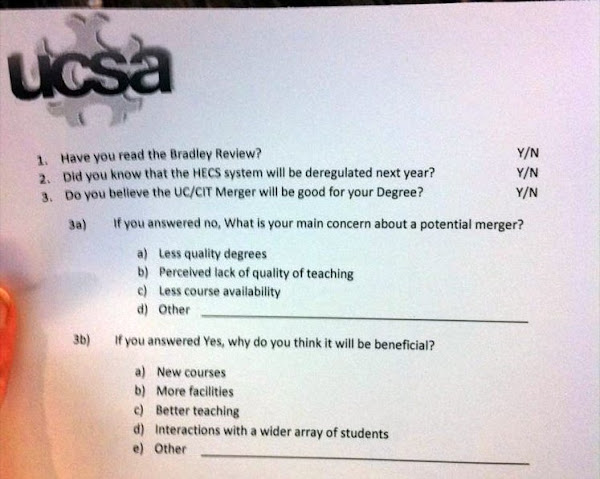 Monique Skidmore is speaking, not sure who she is..

Nothing new here. They’re pretty much just reassuring UC students that nothing bad is going to happen/their degrees won’t be devalued when the merger goes ahead.

General consensus is that students it’s going to dumb down their degrees.

I think most people are misinformed though. There will be more choices and opportunities should the merger go ahead.

Monique mentioned that by amalgamating UC and CIT they will become an internationally ranked uni.

-Will they add more parking if we get CIT students? (they don’t want to pay)

USCA president said UC is looking to get a gated system and you have to swipe to student ID get in so pubes don’t steal the parks.

-UC students worried about liability of CIT’s financial situation as the government has already bailed them out.

-worried that UC will become a ‘super tafe’

-brought up how swinburne and rmit are doing well in world rankings.

-will UC be worse off if it doesn’t go ahead with the merger? If it’s not broke don’t fix it.
-system is changing, 5th smallest uni in the sector, not funded by gov for specialized research like ANU.
-all facilities eg. disability services, library services will improve.
-together UC and CIT will be powerful, separately they’ll have to market against each other.

-looking to become a world ranked uni by 2018

-UC going to rebrand itself soon.

And now I’m bored. I’ll let you know if anything actually happens like a riot or some s***.

I am currently a Masters student at UC and I think the merger is… a little silly.

CIT performs such a different function to a university that this should never have been considered. I actually started my tertiary education at CIT so it holds a special place in my heart but it is most certainly not a university.

Funny to mention RMIT as thats where I recieved my undergraduate degree.

So what if the CIT does not make money, is that really the point? I thought it was to get people into a trade supported by the government?

Brenton Higgins - 11 minutes ago
Joshua we’ve had two elections on that already. Canberra decided. View
Jayne Denise - 24 minutes ago
Sean Bishop I am a reformed anti-tramer. Northborne is so good now with less cars and less buses. 👌Coincidentally, I work... View
Joshua Andrew Morgan - 8 hours ago
Jayne Denise or just CAN the TRAM View
News 43

Sarah Bauuer - 2 hours ago
Jo Bauer want to go to the Great Barrier Reef with me? View
Jak Kanard - 14 hours ago
If this is true, and not compromised by the buffoonery masquerading as ‘government’ in the ACT, bring it on ! View
Emerson Yang - 16 hours ago
Jack Gabriel decent sale prices View
Property 7

Stephen Esdaile - 11 hours ago
Can't vote Liberal, not voting Labor or Green. Looking at what the progressive are offering.... View
Frank Koch - 13 hours ago
Phillip Business Community well said View
Martin Miller - 16 hours ago
Charny Barney no 'whackadoodle ideas here . He's just plain arrogant to those who disagree with him. There is no real consult... View
Opinion 1

tonyd535 - 14 hours ago
Maybe a hospital first to take pressure off of the existing facilities. One for Gungahlin and another for Tuggeranong to take... View
ACT Election 8

The Spring Equinox passed this week and the days are now longer than the nights, but a polar blast of...
News 43

@The_RiotACT @The_RiotACT
Fyshwick’s Designer Op Shop Emporium is a cornucopia of surprises, and its fabulous Emporium Espresso café is no exception https://t.co/P1xL5LBUJ0 (7 minutes ago)