Working-class teacher CJ gets an ARIA nomination from Barnsey 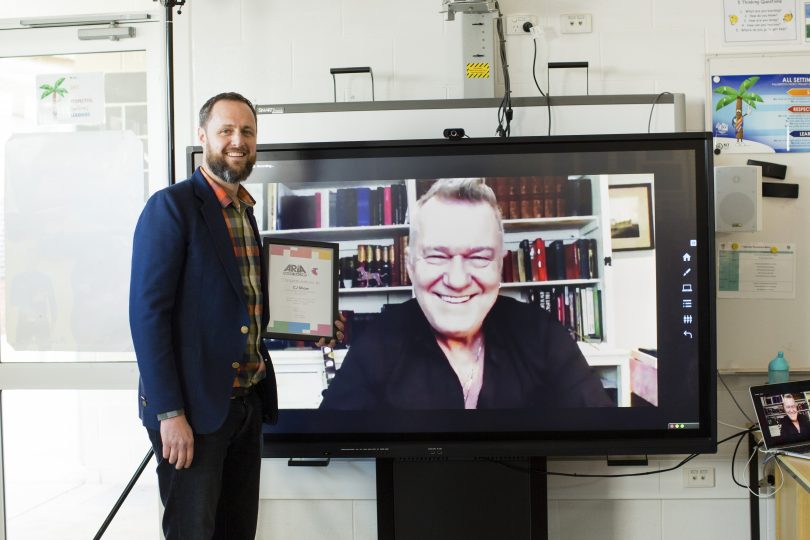 Christopher ‘CJ’ Shaw is a working-class teacher at Palmerston District Primary School who has just been nominated for an Australian Recording Industry Association (ARIA) award for music teacher of the year.

The nomination came from the working-class man himself, Jimmy Barnes, via a live video link into the classroom at Palmerston that left the usually vocal CJ speechless.

“To get an ARIA nomination from Barnesy leaves a Barnesy fan like myself absolutely stumped for words,” he said.

“It is a huge honour for me and the incredible Palmerston District Primary School community whom I represent. I am the first nominee from the ACT and so it is also great news for Canberra.” 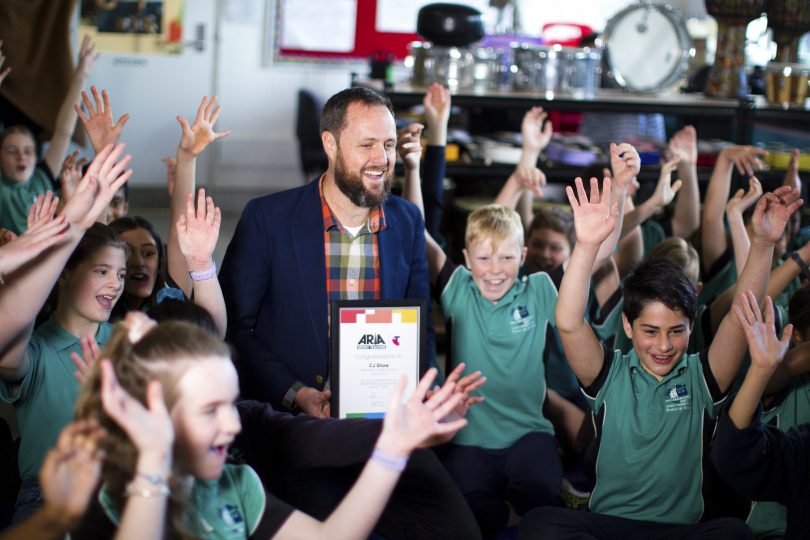 CJ has been nominated for the music teacher of the year award at this year’s ARIAs. Photo: Hilary Wardhaugh

CJ has hit all the right notes when unlocking his musical methods of learning.

There’s the times table rap for maths and the homophone rap about the semantics of the English language.

“Music is a great tool for students to access subjects that are often complex or challenging,” CJ says. “I’ve written hundreds of songs that have helped immerse students in all aspects of the curriculum.”

A former touring folk musician from the Blue Mountains west of Sydney, CJ brings his skills as a performer, songwriter and producer into the classroom to expand students’ understanding of Australian culture, history and society as the head of music at Palmerston Primary.

Many of the students at Palmerston Primary have parents working in the Australian Defence Force so CJ’s song earlier this year about the sentiments of war called ANZAC Biscuits was released to help students understand what is a very complex topic. The song’s music video was shared by the Australian War Memorial and had more than 23,000 video views in its first week of release.

Students are also encouraged to use their musical skills in real-world settings, with CJ giving young students the opportunity to express themselves through music.

“I wanted them to see the value in their existence and that it is worthy of art. When they identify themselves in the songs I witness their confidence and self-esteem grow,” CJ says.

In This Together is another song he wrote for Reconciliation Week, which acknowledges the school’s 62 student nationalities and incorporates the local Ngunnawal language into the lyrics.

CJ believes songwriting sparks creativity, encourages self-expression and boosts confidence in students, so he encourages them to write and create their own music by performing and recording their songs in the school’s makeshift recording studio before creating music videos to accompany the songs.

READ ALSO: Besties find their voice in a match made in music

“Students love learning about the nuts and bolts of recording, like how to sing into a microphone, pitch control and how to analyse their technique.”

“Teaching subjects through music and verse can have immediate impacts,” CJ says, “The use of lyrics, melody and rhymes help students connect to their lessons especially if there is a learning barrier or if English is a second language.”

The ARIA award for music teacher of the year will be decided by popular vote and CJ hopes he can bring an ARIA back to the ACT.

The public can vote for CJ as their favourite music teacher via the ARIA website. Voting closes at 11:59 pm on 18 November. The music teacher with the most public and industry votes will be announced during the 2020 ARIA Award ceremony in late November.

Leigh Sales has trumped this.

Good on him! I love it when the enthusiasm of a teacher is contagious!

Capital Retro - 1 hour ago
So, it will be called the "Opal of Colour"? Ridiculous.... View
Andrew Dale - 10 hours ago
Rory Bourke I'm both mate 🥸🥴 View
Lucas Anasdow - 12 hours ago
The Left are pushing to have the Event Renamed as the Term 'Black' is deemed to offensive and upsetting for segments of the C... View
News 32

Ashley Wright - 4 hours ago
Jennie Smith vast majority of the tram works were done in the median strip of flemmington road with minimal impact. There was... View
News 5

sisyphus - 5 hours ago
Better still, read some up-to-date peer-reviewed research. That film is primarily attacking historical straw men, presenting... View
jwinston - 12 hours ago
Watch “The Planet of the Humans”, a documentary by Michael Moore, to see the lie of renewables and so-called green energy... View
News 4

JC - 5 hours ago
Actually think you will find this “outcome” actually backs up my comments. Do you think both parties came to a $400,000 a... View
chewy14 - 6 hours ago
JC, The other week you were claiming the silence was due to pending litigation which now as we see (and I said) was false. Th... View
JC - 6 hours ago
Life doesn’t work like that. It’s quite clear that for the last year they have been in dispute with the builder over this... View
Community 20

@The_RiotACT @The_RiotACT
Spacey Jane returns to Canberra this weekend, playing two massive shows under the lights of the @canberratheatre. Find the details in this week’s #GigGuide, which features all the best shows in town https://t.co/MNHOt93RAV (2 hours ago)