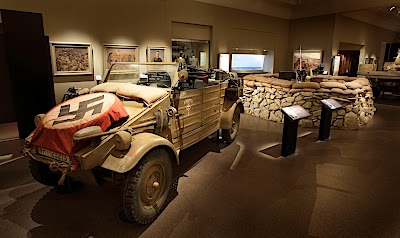 The Australian War Memorial has announced that they’ve re-opened their WWII galleries after a refurbishment:

“The revitalised galleries are going to improve our visitors’ experiences. It was also important to draw more attention to the experiences of families in Australia during the war, which the new items on display enable us to do” the Director said.

Visitors will be able to see a number of objects that have not previously been on display, including: a rare Australian armoured vehicle, the Dingo scout car; a captured German Flak 38 anti-aircraft gun still in its original desert camouflage; a unique Chevrolet lorry and Breda anti-aircraft gun combination used by Australians during the siege of Tobruk.

A new showcase emphasises the importance of the “home front” and includes a beautifully restored civilian Studebaker sedan with its producer gas unit and an Anderson shelter, which was designed to protect families in their backyards.

Returning displays include the Kokoda campaign and German Kübelwagen. The HMAS Sydney exhibit has been updated to include an audiovisual presentation.

Teagan Erin - 26 minutes ago
Shelby inside anu residences 😂😂 View
Billy Fox - 1 hour ago
Emma-Lee Louise Campbell scoot crew View
Chris Sherlock - 15 hours ago
Jorge Gatica i suppose you’re one of those people who thinks that road levies pay for roads. You know it all goes into the... View
Opinion 95

Frances Jane - 2 hours ago
Dan Backhouse I'm virtually vegetarian, and have been vegan at times, but found the article to be outdated. Perhaps it's the... View
Nick Sifniotis - 3 hours ago
And the second thing is "you're objectively evil". Cool, that's the last time I'm inviting you over for lunch View
Jannah Fahiz - 7 hours ago
Oh my god. These comments are wild! Thank you for a good read RiotACT :) View
Food & Wine 10

Elysha Fordham-Young - 14 hours ago
Where is the Waramanga one please? I can't find it. View
show more show less
*Results are based on activity within last 7 days

If you are looking for a restaurant to celebrate that special occasion, then you have come to the right place!...
Lifestyle 19

This is why the $498m AWM extensions should not go ahead

@The_RiotACT @The_RiotACT
Thinking of a low-key Christmas without the usual trappings? Don't do it, warns Ian Bushnell https://t.co/1Pz8SwfvJC (21 minutes ago)

@The_RiotACT @The_RiotACT
There's a big week ahead with TEDxCanberra, a trading car fair, a car show, and the return of Sunset Cinema among the events on offer https://t.co/c6zON8V2x6 (12 hours ago)