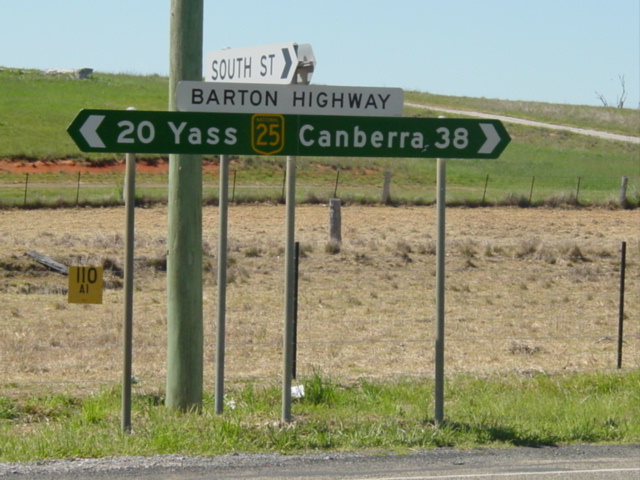 Yass Valley Council is adamant they will pursue a buffer zone at the state border. File photo.

Yass Valley Council says its adamant that a proposed border buffer zone to prevent urban development along the Barton Highway will go ahead, despite significant pushback from the NSW government. That’s despite opposition to the buffer from some landowners who may have anticipated a development bonanza.

NSW planners have rejected Council’s application for a 5km zone north of the ACT border where no development would be allowed. But Yass valley planning director Chris Berry, who has pushed hard for the idea, says it’s critical to prevent ad hoc urban encroachment spilling over the border.

“A lot of local residents have jumped up and down,” Berry says. “They may believe they’re entitled to subdivide and make a profit, and undoubtedly some people had expected urban development would creep over the border and they’d be strategically located to take advantage.”

“But that’s never been the case for that area. Through our settlement strategy, we’ve established a gateway to Yass Valley. It’s an important rural landscape, and there are significant environmental values around Mulligans Flat that we would like to maintain and protect,” he said.

Instead, Council plans to channel development and growth towards both Murrumbateman and Yass, which Mr Berry said were better positioned to take advantage of growth for Yass Valley. That will require infrastructure investment including a water pipeline from Yass, but Mr Berry says Council can solve the issues. Development in Yass town is also a priority over “urban suburbs strung out along the border”.

“Our perspective has always been that the buffer zone will be held largely within private hands,” Mr Berry said. “We have a number of existing landowners who value rural lifestyle and landscape. They farm the land, there are orchards and traditional grazing in the area.”

The development exception is Ginninderry, where a unique and complex set of issues will arise from the Parkwood site straddling the border. The site can only be accessed from the ACT and Mr Berry says there is “some logic” in seeing the extensive development as a special case.

“We’d agree that the natural river boundary and the falls would make a better border than a straight line on a map, but we’re committed as a Council to developing Ginninderry without disadvantaging other ratepayers and residents in Yass Valley.”

That will require complex cross-border agreements between the ACT, Yass council and the NSW government, but Mr Berry points out that the impact of these is several decades into the future. If negotiations fail, Council’s fallback position would support a change in the border to incorporate the development fully within the ACT.

“If we cannot make those arrangements work, we don’t want existing ratepayers in Yass, Murrumbateman, Gundaroo and Sutton to have to bear the costs of servicing that area,” Mr Berry said.

The Ginninderry site also includes areas of significant conservation value, and Mr Berry said that current development proposals include a conservation area with a special rating mechanism for conservation purposes.

A percentage of the initial sale price would go towards a sinking fund to manage the conservation corridor around Murrumbidgee river including fencing, weed control, pathways and walkways. There would also be a special rate applied towards ongoing management of the conservation reserve.

Mr Berry says that while this arrangement would not offer the Ginninderry area the conservation status of a national park, it has the advantage of creating a dedicated and continuous income stream under the development agreements.

“National parks are government funded and that means the financial allocation is subject to the usual budgetary processes,” he said. “Under this proposal, the money raised would be wholly dedicated to this area.”

Do you think we need a buffer zone between NSW and Yass Valley?

Yep, their land prices just took a hit cause they can't sell out and subdivide. Good move IMO

I think farming and undeveloped land in and around the area is doomed to give way to more high density urban Canberra sprawl - in the short to medium term until the housing boom crashes.

Because Hall to Murrumbateman at a residential 50km/h is just what we need. /sarcasm

Saskia White - 42 minutes ago
Linda Gillespie it’s more about keeping your bugs on you and not sharing them around, as opposed to stopping you inhaling o... View
Linda Gillespie - 2 hours ago
Saskia White no they won’t, they are fashion not medical masks. Btw if someone has the virus they should be either in hospi... View
Mel Hendrie - 2 hours ago
Saskia White no. These masks don’t prevent droplets from spreading. View
News 22

Marina Rankin - 1 hour ago
Shan Weereratne you obviously don’t want nurses or doctors for your hospital then. A fair number of them travel into Camber... View
Shan Weereratne - 6 hours ago
Tegan Smith, I dont suggest completely denying NSW residents entry to the ACT but at least they should be subject to some for... View
Louise Flood - 10 hours ago
Darren Sault world health organisation world o meter has the daily numbers for Australia View
News 84

Sher Young - 2 hours ago
Alex Elliott as long as everyone remembers Barr does what he wants without community input View
Steven Chaytor - 1 day ago
I for one am very excited about the West Basin development and the potential to bring the city to lake in sensitive a innovat... View
News 3

Teena Sullivan - 8 hours ago
Juliane Samara my thoughts exactly. View
Juliane Samara - 8 hours ago
Sarah Beatty if they evict their current tenants, they are very unlikely to find any new ones during the crisis anyway. This... View
dcollins - 9 hours ago
Jase, you're absolutely right. Here is the deal: if you still have a job and have an investment property, count yourself very... View
News 21

Coralee Flood - 9 hours ago
Our chemist had them. Best idea. Hope Drs surgeries install them too. View
Rhonda Maxwell - 10 hours ago
Tony Hardy put a freezer bag over your hand to act as a barrier View
Tracy Chalk - 11 hours ago
Aldi too please. View
Lifestyle 3

Ann Gugler - 11 hours ago
I didn't know about the launch of the book, but certainly will keep an eye out for a copy when this madness of the virus sett... View
Motoring 77

Voice your concerns about the Parkwood Planning Proposal

@The_RiotACT @The_RiotACT
Canberra's real estate and property industry is harking back to older practices and embracing the new as it adapts to the new business environment https://t.co/O15BrT4E2l (3 hours ago)