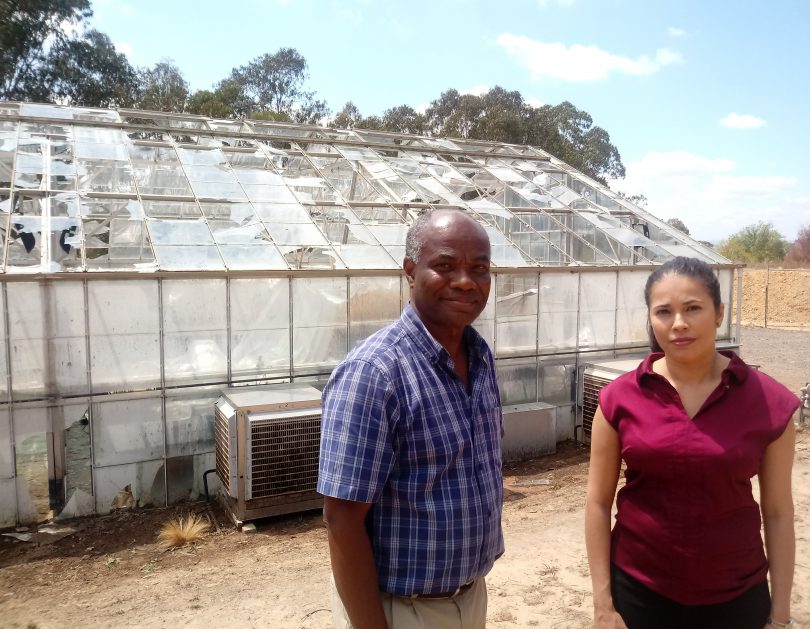 CSIRO is still tallying up the damage bill but they already know priceless plant research was lost in yesterday’s hailstorm that shredded almost all of its glasshouses at Black Mountain.

The storm pounded areas of Canberra with golf ball to tennis ball-sized hailstones, and left 90 per cent of the Agriculture and Food Business Unit’s 65 glasshouses shattered.

Much of the research developing disease and drought-resistant varieties of grain and cotton is now unusable, devastating the hundreds of researchers involved.

Chief research scientist Dr Evans Lagudah was in one of the glasshouses with a colleague when the storm hit, saying it happened so suddenly they had no time to spare as glass exploded above them.

He said the choice was either to stay and be injured by falling glass or get out and chance their luck with the hailstones.

He wrote to his family later saying that at that point he could have beaten Usain Bolt in a race, such was the adrenalin.

It is the second time in about 13 years the Black Mountain precinct has been devastated by a hailstorm, with a 2006 event requiring 2500 panes of new glass.

CSIRO Chief Operating Officer Judi Zielke said this time the damage was much greater, with five buildings also impacted, and repairs could require up to 5000 panes of glass.

She said the focus was on assessing the damage and supporting staff before moving into a recovery phase that would take at least a year. Ms Zielke expressed gratitude that no one was hurt.

“We don’t truly know what it is that we’ve got to work with from an infrastructure and research perspective,” she said. 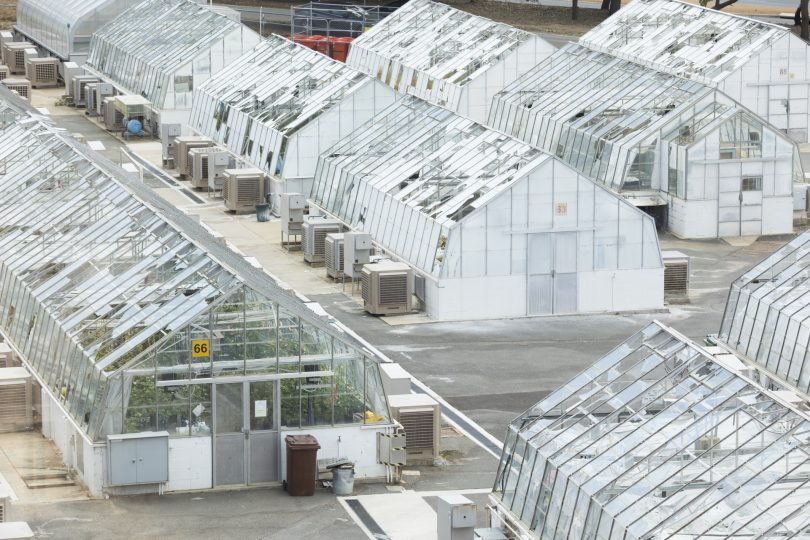 The scene of devastation at the CSIRO Agriculture and Food Business research precinct. Photo: Michelle Kroll

There will be significant flow-on effects with research projects set back by up to three years, and deliveries of genetic material to a range of clients including companies, philanthropic organisations and industry bodies such as the Grain Research and Development Corporation disrupted.

“Years of research have been impacted – not just CSIRO but all the parties we collaborate with,” Ms Zielke said. “This is about work that directly impacts on farmers and the agricultural sector and a range of other areas around the country.”

She said CSIRO would be working with the ANU, which also suffered widespread damage, to save as much research as it could.

Dr Lagudah said some work could be recovered and there were seed reserves as part of contingency plans, so it wasn’t ”all doom and gloom”.

Part of the recovery plan would be considering whether a different non-shatter material such as polycarbonate sheeting should be used in the glasshouses.

While some field researchers had postponed work due to the storm warning, Ms Zielke said staff working inside were not as conscious of the alerts.

At the nearby ANU, a large number of buildings suffered broken windows and skylights, with significant damage to the Research School of Biology greenhouses.

A spokesperson said the Acton campus was closed on Tuesday, and staff and contractors had already made excellent progress cleaning up the site and assessing the safety of buildings.

The university should re-open tomorrow (22 January), although some isolated areas may be closed longer.

I don’t remember any major complaints when Greenpeace decided to destroy the benefits from CSIRO “priceless plant research”. Perhaps people should remember what they did to this CSIRO project –
https://www.abc.net.au/news/2011-07-14/20110714-greenpeace-gm-protest/2794272

Kylie Bonfili - 45 seconds ago
The tests aren't mandatory. So why even make it a thing🤦🏻‍♀️ View
Samyukta Paturi - 18 minutes ago
I am just wondering how are public hospitals going to be managed with increased number of cases from next week.Do we have a p... View
Mæ Ķaýle - 50 minutes ago
They are saving the RATs for the next "super strain" scare people a bit more first, then raise the prices (which should be fr... View
Motoring 25

Mark Johnson - 53 minutes ago
Belinda Makrides don’t think it would make a difference. Toyota have a pretty good rep no matter where they are made. The H... View
Mark Wallin - 2 hours ago
A car you operate rather than drive. View
Opinion 43

Capital Retro - 3 hours ago
Another ACT government "pop-up" failure. View
kenbehrens - 3 hours ago
CR, I'm not sure that he's been this far south? There's no Light Rail planned for Erindale! Why didn't they place this large... View
Opinion 12

@the_riotact @The_RiotACT
After more than 25 years, the iconic #Sfoglia Patisserie and Cafe in #Dickson will serve their final coffee this Saturday https://t.co/NROhjkTshL (31 minutes ago)