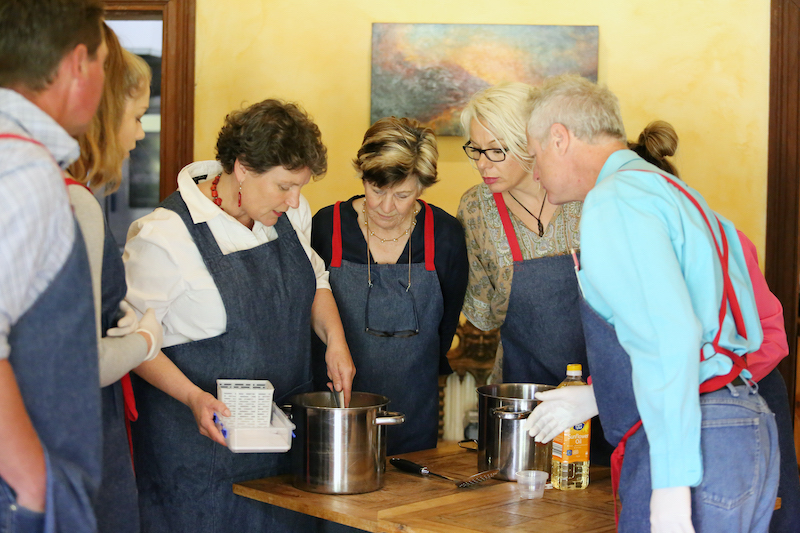 Bridgette Cathles churns away under the gaze of a cheesemaking class before social gatherings were restricted. Photo: Supplied.

Amateur beekeepers, home bread bakers and champion cheesemakers are drawing on their self-sufficiency expertise during a time of supermarket rationing and an unexpected spike in the hours we are spending at home and in the kitchen.

And when the current crisis passes and we can all meet again, you might like to do so over a block of blue with local cheesemaker and teacher, Bridgette Cathles.

A passionate advocate of self-sufficiency, Bridgette has been building a profile among foodies who cannot resist a delicious block of cheese.

“I teach classes in Canberra and there is a lot of interest around it,” she says. “I am excited about cheese!”

No sooner had Bridgette launched her Yes Cheese classes and related services at Wee Jasper, a small village 60 km southwest of Yass, than boutique beer and wine outlet Hops and Vine at Hall, and cool-climate winery Contentious Character at Wamboin approached her for cheese and wine-matching classes.

“All my contacts are increasingly coming from the wine industry,” she says. “It’s been interesting seeing that grow in a way I didn’t anticipate. I wasn’t sure when I started this; it was a hobby, really. It has now taken over my life!”

Bridgette has discovered that a number of people who attend her courses enjoy making food from scratch from their gardens. Many have their own chooks and bees, and it seems cheesemaking is the next step in self-sufficiency.

“There is also a good percentage of people who come just to eat the cheese, drink the wine and get an appreciation for the process,” she says. “Thirty per cent are deadly serious and make cheese again and again, and get their supplies through me.”

Her Canberra classes run from one to four hours, and are a very social event. People leave with their freshly made halloumi, mozzarella and lemon curd cheeses at the end of the day.

Those prepared to travel to Wee Jasper for all-day classes on blue cheese, stilton, camembert and feta take the cheese home, but they must wait for the maturing process to complete before they can eat it. Cheddar and havarti require six months before they can be eaten.

“That sorts out the serious students,” says Bridgette. “Some don’t want to do that. We ‘babysit’ their cheese, look after it [stored in a wine fridge at 12 degrees Celcius] and when six months is up, we ring to say, ‘Your cheddar is ready.’”

Despite her expertise, Bridgette is yet to master Emmental Swiss-style cheese with the big eyes, although it’s not for lack of trying.

“You have to be able to hold it at 23C for days in order for the cheese to swell up and get the eyeholes in it,” she says. “We live in an old farmhouse and it is not airtight enough for me to do that. It always goes pear-shaped.”

However, she has mastered Italian provolone, a matured mozzarella requiring precision.

And the most satisfying cheese?

“The blue because it is so delicious,” she says.

A fine selection of the finished product.

Bridgette has judged cheese entries for the past two years at the annual Yass Show, and encourages many of her students to enter the competition. Had it not been for coronavirus, she and they would be there again this year.

Andrew Dodds, co-founder of Thyme to Taste deli and cafe in Yass, was scheduled to judge the show’s cheese entries. He judges a good cheese through the smell, mouthfeel and – much like wine tasting – picking up all the earthy flavours. When Thyme to Taste first opened in 2012, he stocked delicious cheese made from ewes’ milk at Windellama, 46 km southeast of Goulburn. Sadly, the sheep dairy there has since closed.

While the Canberra region is renowned for its cool-climate wine, and the Yass district for fibre and protein production, neither has much future as a cheese producer because, as Andrew points out, they are not dairy areas. Nevertheless, cheesemaking and tasting are thriving. Especially in Yass.

One Response to Yes Cheese: self-sufficient cheesemaker comes into her own
Filter
Showing only Website comments

More power to the cheese makers! My second favourite in the trifecta of bacon, cheese, and statins.

Timothy Bailey - 1 minute ago
YAWWWRRRNN View
Timothy Bailey - 6 minutes ago
Brett Williams - being 'bored' is what we in the Army used to call 'a personal problem'. Another comment was 'maybe you're bo... View
Natalie Gallagher - 12 minutes ago
Yes! I hope they do, it would be awesome. 🙏 View
Community 7

Grace Hewitt - 9 minutes ago
70 years is a wonderful achievement beautiful neighbours an friends xx... View
Annie Tully - 1 hour ago
Nice article 😊 View
Brian Lodge - 2 hours ago
Hi Susan how wonderful Congratulations to Mark and Coral , they were great neighbours (very caring) back at Tulla over the ye... View
Opinion 57

HiddenDragon - 13 minutes ago
Yes, this is inconvenient news for an ALP which has painted itself into a fiscal corner by selling out on negative gearing, c... View
chewy14 - 2 hours ago
Won't be fooled again, That's a joke right? This isn't about China launching a military attack on us in the short term, it's... View
News 1

alexss - 13 minutes ago
Being present on site Friday afternoon I believe the final directive provided from the builder was along these lines... "get... View
Food & Wine 1

TimboinOz - 29 minutes ago
I hardly ever use a cook-book, except to check amounts, temps and timing - IF I'm doing something new or new-ish. Anyone who... View
News 16

Noni Evans - 55 minutes ago
Casey Jane , found any yet? View
Lorraine Clements - 2 hours ago
Got some outside our place that I have put little jewels all over them. View
News 19