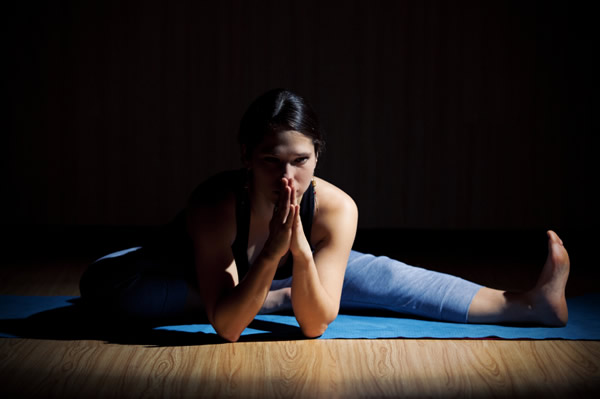 Fancy getting hot and sweaty in a room full of people, some near-naked? Try Bikram Yoga.

You’ll probably have heard of Bikram Yoga by now – it’s been around awhile. Well, yoga, of course, has been around a looong while. Bikram Yoga, or as I like to think of it, Sweaty Yoga, has surfaced more recently and was first popularised by Hollywood celebrities and the like, maybe a decade or so ago if I remember my glossy magazines correctly. ‘Invented’ by Bikram Choudhury in the 70s, Bikram Yoga takes yogis through a 90 minute sequence of postures, performed in a room heated to 40 degrees Celsius with 40% humidity.

There are a few theories for the heat, among them that injuries are reduced, that you’ll get a higher cardio-vascular benefit than other forms of yoga and that you’ll become ‘a fat-burning machine’. Or something like that. There are also some sciency-sounding benefits like better elimination of toxins and something about haemoglobin. I apologise if I sound glib or dismissive here, but I tuned out at that point.

Canberra has a little piece of the action. I tried a class at Bikram Yoga Kingston on a Saturday morning and I didn’t really know what to expect. I had been given a bit of a run-down about the etiquette of a Bikram Yoga class – no speaking, don’t take a drink until the instructor says you can, don’t leave the room before the instructor (which means if the heat gets to you and you feel sick you’re just meant to sit down and wait out the rest of the class). Etiquette also suggests not wearing perfume or other strongly smelling things, but is sadly silent on wardrobe choices – there were two men in speedos and I discovered what kind of underwear the fabulously flexible woman in front of me favoured within minutes as I was ‘treated’ to an up-the-shorts vantage point. But I digress.

The class was in a massive room, and it was full to capacity with people of all ages, shapes and sizes – a bit too full if you ask me. We began with the lights down low, and lying there in the heat, on my towel (mat underneath, you’ll need to take both), I could have fallen asleep. I was surprised that the heat didn’t bother me, I’m not normally fond of it. Soon enough the instructor entered the room and talked us through our postures and breathing techniques. For a novice like me her instructions were helpful, she talked us through what to put where in a calming low voice. She did encourage us to ‘push it’ a bit though – which is okay for an experienced student but I wasn’t sure where the limits were and could probably have hurt myself if I went too hard. The 26 postures begin with essentially standing and breathing before moving through a range of more complicated ones. Being Yoga, they had some fabulous names (I wasn’t good at the Awkward Pose but was very good at the Dead Body Pose). We spent a few moments in each pose before shifting into the next one – I found it a bit static actually and suspect that yoga of any kind is not for me. I did find some of the poses quite challenging, I’ll say that. At the conclusion of the class I wasn’t sure if I was meant to feel energised or relaxed. A friend who had accompanied me loved it and was practically glowing but I was mostly relieved it was over.

The 90 minutes went surprisingly fast. Not so surprising was how sweaty I got – and I wasn’t on my own there. My hair was drenched and every inch of my clothes too. There are post-class shower facilities at the studio but the ratio of shower-to-student was woefully inadequate, so plan ahead if you’re going to check it out.

Look, don’t necessarily take my word for it – there are millions of yoga devotees the world over and they can’t all be wrong. It just turns out that I’m not one of them.

Bikram Yoga Kingston is on Eyre Street. Casual classes cost $20 and need to be booked online at http://www.bikramyogakingston.com.au/

I am a FITNESS atheist and have been working out since a couple of years.
But off late i am having back ache.
Doctors have advised me to stop exercising . Can yoga help me with my Back ache ?

Hi JenRB, is yoga good for stretching? I’ve read only a little about it and need to do some stretching for sport.

I’ve been practising yoga for 20 years, various styles and I dislike both Power yoga and Bikram yoga. If they did not suit you, then I suggest try another style.

Donna Arthur - 2 minutes ago
Found some walking around the elmslea ponds. View
Vicky Cook - 14 minutes ago
Thanks to the people doing this as I'm sure it brings a smile to the faces of those who are finding them. View
Christine Barber - 27 minutes ago
Jerrabomberra View
Lifestyle 3

Lisa Greig - 7 minutes ago
Matt Groeneveld I’d hate to have to count them all! View
News 8

Alexei Gorbatov - 28 minutes ago
Why we don’t hear that money go to strengthen our hospitals? View
Susanne Levy - 10 hours ago
Hugh Munro our medical treatments and medications are none of anyones business. It is not mandatory . View
Nathan Burraston - 10 hours ago
Hugh Munro yes I had the Astra Zeneca. That's why I want to get on with it. People who have had 18 months of scaremongering s... View
Motoring 1

Ed N Joanne Towner - 44 minutes ago
Had one of these and it was an excellent vehicle and great to drive. View
Food & Wine 12

Helen is living her best life during lockdown, with your help

@The_RiotACT @The_RiotACT
Construction sites and supermarkets in almost a dozen suburbs, as well as a number of public transport routes, have been listed as exposure locations by ACT Health overnight https://t.co/rSgPZcoRvr (24 minutes ago)

@The_RiotACT @The_RiotACT
Stay-at-home orders mean no more car reviews. Or does it? James Coleman goes on a drive for more milk in his Mazda 6 wagon - and don't pull that face! https://t.co/V2VqT7Osv6 (53 minutes ago)