Youth take to the streets 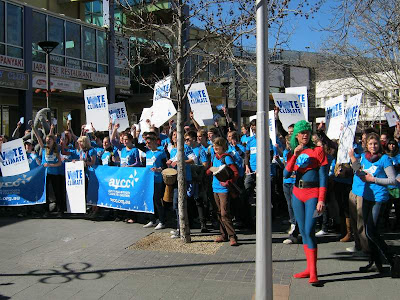 Owen sent in this pic with the following note:

Garema Place, about lunchtime on Sunday saw forty or more young and happy blue clad soles chanting their way through the place. The cards handed out described themselves as the Australian Youth Climate Coalition, no political affiliation, though the back of the card had lots of smileys against the Greens. My ears couldn’t work out what they were chanting, but it had a good beat and rhythm to it. Looks like they were having fun.

So there you go.

Got an image you want to share with Canberra? Email it to images@the-riotact.com

The AYCC is not aligned to any political party

Yes the AYCC is young and yes we are passionate.

However the characterisations in these posts are just factually incorrect and seem to merely be drawing on tired stereotypes.

The AYCC is not aligned to any political party and if you look at the policy work they’ve done you’ll find that they’ve been critical of all the political parties for not doing enough on climate change.

It’s very easy to critise – it’s much harder to get out there and try to make a difference.

…It’s better than geting their heads busted by the cops on the picket lines with the miners and steel workers, as the students of my generation (in the UK ) were I suppose. But it’s all so damn tame these days.

Except that the environmental protesters are more likely to be clashing with the coal miners over closing mines, with the cops keeping them apart. Did you live in a shoe box in the middle of the road back then?

A whole bunch of “Student Grant”s (see Viz comic) on the march. “Radical” students to day are so conformist; “save the lesbian disabled single parent whale”. It’s better than geting their heads busted by the cops on the picket lines with the miners and steel workers, as the students of my generation (in the UK ) were I suppose. But it’s all so damn tame these days.

When I heard “youth” and “climate change” I switched off altogether.

Says the guy who just wrote: “Gaol” is pronounced “gay-oll” and there is no such word”

I like to see uni students being uni students. They’re SUPPOSED to be passionate idealists, politically naive, loud and drunken. They have the rest of their lives to become boring conformists.

When I heard “youth” and “climate change” I switched off altogether.

Most of this paragraph is true. However;

a. So what if they reside at the ANU?
b. Any survey of undergrad students at ANU (and probably any Australian uni) will show a bias toward labour in a two-party-preferred question. Any survey of people willing to march about climate related issues (even as an excuse to booze it up) is likely to show a bias toward the greens.
c. While there is probably a good percentage of participants who were there, at least partly, for non-environmental reasons (BBQ, beer, seeing girls in tight clothing) I tend to doubt that is any higher a percentage then those who attend meetings of other political causes to booze it up, or because they are scheming sycophants lusting for power.
d. If by chanting, marching and then getting trashed they are getting even a little media attention, then they have probably achieved everything they set out to do.

Another waste of time by arts students with not enough work to do.

Son, when you participate in sporting events, it’s not whether you win or lose: it’s how drunk you get.

Julie Macklin - 18 minutes ago
James Dof And no one has ever expected trades people to cycle from job to job with their tools. That is just a straw man argu... View
Heather Grant - 3 hours ago
Suggest they hire extras from Deane's and Keir's (and anywhere else close by that have spare buses for hire). Instead of look... View
Ashley Wright - 6 hours ago
Cary Elliot Johnson do you have an example of such a city but when defining decent? define it from a daily users point of vie... View
Opinion 47