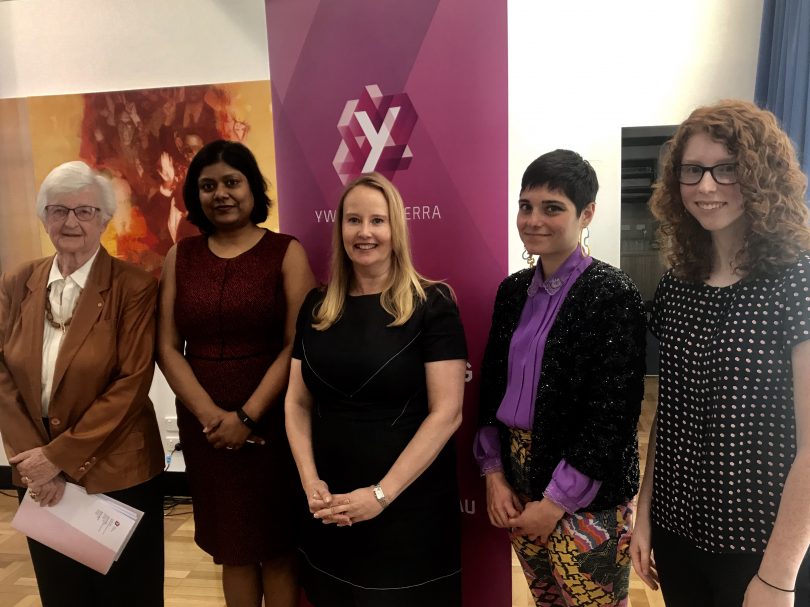 An ambitious survey that canvasses the lived experiences of more than 1000 women from every ACT postcode has found that while there is much to celebrate in Canberra, women of all ages continue to feel unsafe in public spaces, experience sexism and inequality in their workplaces, and significant financial disadvantage over the course of their careers.

Our Lives: Women in the ACT was commissioned by the YWCA and launched last week at the Legislative Assembly. YWCA CEO Frances Crimmins says it’s the organisation’s 90th birthday gift to Canberra, predicated on the need to understand women’s lives more deeply.

A panel of speakers at the launch discussed the findings from the perspective of ageing, migration, gender equality and youth, speaking from their lived experiences and professional expertise.

“We need to know what the data says, but we need more than that”, Ms Crimmins said at the launch. “We need to hear voices of women coming through the data.”

Ms Crimmins says the raw statistics from the Census figures often don’t stack up with women’s lived experience, especially where issues like public safety are not disaggregated for gender.

For example, 54 per cent of Canberra women feel somewhat unsafe or very unsafe accessing public spaces after dark. For women with disabilities and Aboriginal or Torres Strait Islanders, the figures were even higher. And a staggering 72 per cent of women aged between 18 and 24 felt somewhat or very unsafe in public at night.

Those figures multiply when the threats are from known aggressors. The Our Lives research also shows that 24 per cent of 18 to 24-year-olds had been abused in domestic or interpersonal relationships.

“That is a quarter of the participants in that age group. It saddens me that statistic is so high after decades of feminist advocacy public campaigns and discussions,” Ms Crimmins said. “Domestic and interpersonal violence affects an unacceptable number of women.

“We still need to do more beyond the purely physical to recognise intimidation, coercion and stalking by technology, which is on the rise.”

There were also concerning figures about the amount of unpaid work women are still expected to shoulder and the impact those expectations have on their financial wellbeing and careers. The survey shows 46 per cent of Canberra women working more than 35 hours per week (the equivalent of fulltime work) and were also performing more than 20 hours per week of unpaid work.

Together with the common experience of housing insecurity, particularly for single mothers, and the lack of certainty over retirement security, the Our Lives report painted a complex picture of the stresses on women’s lives.

“Common statistical resources like the Census or personal safety survey do fall short of identifying what a community feels, hopes for and perceives about their circumstances,” Crimmins said.

“In this report, we try to paint a nuanced picture and shine a light on the daily realities of over half of Canberra’s population. There is a real story to be told by surveying women’s lives and capturing the trends so we can fully understand and address concerns and policy gaps.”

As a large service provider employing 350 staff and a proud feminist organisation, Ms Crimmins said that the YWCA is well placed and trusted to investigate women’s lived experiences.

“The responses from our survey were candid, insightful and sometimes deeply moving. We spoke to women who were successful, looking forward to the next phase in their lives and enjoying everything, to those who wanted little more than a meaningful relationship with their family, a holiday or to be offered a home from the public housing waiting list.

“Our report shows there is much to celebrate about our quality of life and wellbeing, but there is still work to be done to achieve true gender equality in the ACT.

“The YWCA calls on our leaders to use this research to inform the design of public policy and spaces and to build real and lasting positive changes for all women.”

Visit YWCA to download a copy of the Our Lives report and learn more about the YWCA.

Tim Rozitis - 1 minute ago
no. Too much population movement. There's enough expats from footy regions here at any time, but a lot of them are transient.... View
Judith Herald - 13 minutes ago
Sean Chamberlain Chicka Fergerson was a sparky by trade, saw him quite a few times after he retired doing electrical works at... View
Michael Bourke - 2 hours ago
No. Stick to guest games at Manuka Oval for GWS. It's good tourism revenue... View
Community 20

Lexie Donald - 6 minutes ago
now you know 🤣🤣🤣🤣🤣🤣🤣 View
Greg Myat - 2 hours ago
Their are other types, same size pole but has a round can like container on the top. I saw one with water coming out of it on... View
Dean Ager - 2 hours ago
I was hoping for letters from the future. View
Opinion 27

Andrew Bell - 44 minutes ago
Peter Hislop There is actually a map indicating an Airport-Kingston-QBN light rail ... all part of an integrated transport pl... View
David Malcolm - 1 hour ago
The most practical way to improve the Canberra services would be to eliminate ALL the Southern Higlands stops other than Goul... View
News 140

Ross McConchie - 50 minutes ago
Toby Töb thanks View
Toby Töb - 2 hours ago
that's a really sensible idea, I like it a lot. I would really love for it to be viable for me to jump on an affordable train... View
News 19