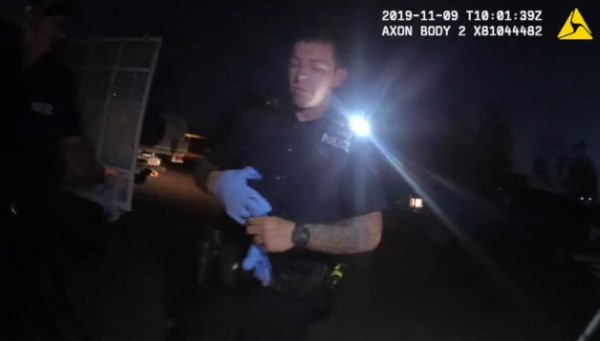 Constable Zachary Rolfe, seen in a still from a body-worn camera that was tendered to the court. Image: Supplied.

After deliberating for less than a day, on Friday (11 March), the jury in his Northern Territory Supreme Court trial delivered unanimous verdicts of not guilty to all charges, including alternative charges of manslaughter and committing a violent act causing death.

Mr Rolfe, 30, who is from Canberra, had faced a four-and-a-half week trial accused of murdering the 19-year-old in the small desert community of Yuendumu on 9 November 2019. He had pleaded not guilty to all charges.

Jurors had heard that after Mr Walker stabbed Mr Rolfe in the shoulder with a pair of scissors, Mr Rolfe shot him once, then Mr Walker and Remote Sergeant Adam Eberl got into a struggle during which they ended up on the ground.

When Crown prosecutor Philip Strickland SC gave his closing address he argued Remote Sergeant Eberl had “effectively restrained” Mr Walker when on top of him on the ground and Mr Rolfe did not have “an honest belief” he had to fire the last two shots to protect himself.

He said Mr Rolfe “completely failed to reassess the situation” when the struggle began between Mr Walker and his partner and didn’t give himself time to think about whether Mr Walker posed an imminent threat.

But in the closing address by barrister David Edwardson QC, he argued that each of the three times his client shot Mr Walker he was acting in good faith, in the reasonable performance of his duties, and in self-defence of himself and his partner, Remote Sergeant Adam Eberl.

“Zachary Rolfe was taught, trained and drilled as a member of the Northern Territory Police Force that an edged weapon equals gun,” he said.

“When Kumanjayi Walker deliberately, and I suggest, viciously, tried to stab both officers with potentially fatal consequences, the only appropriate response was to draw his firearm and pull the trigger, discharging each bullet into the seen body mass of Walker until the threat was removed.”

After the verdicts were delivered, Justice John Burns discharged both the jury and Mr Rolfe.