In uncertain times,
we give you certainty.
9 March 2022 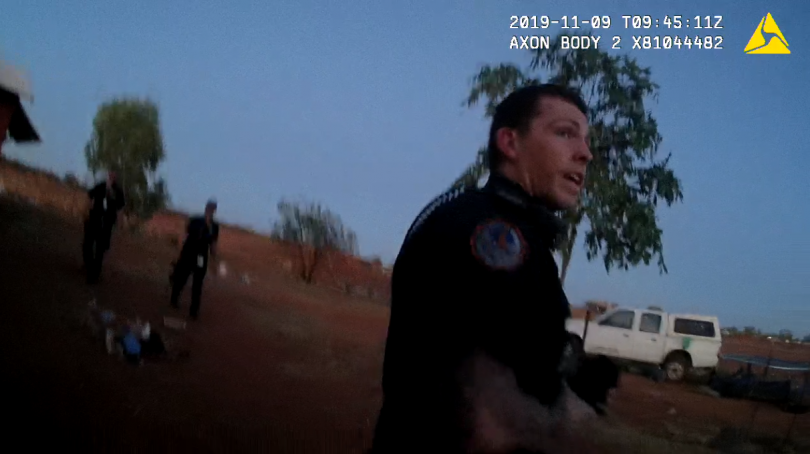 Constable Zachary Rolfe, seen in body-worn camera footage before the shooting. The footage has been tendered to the court. Image: Supplied.

During the closing submissions of Constable Zachary Rolfe’s murder trial, the prosecution alleged he “knew he’d gone too far” when apparently lying after shooting Kumanjayi Walker.

Mr Rolfe, 30, is fighting a charge alleging he murdered the 19-year-old Indigenous Australian man in the small desert community of Yuendumu on 9 November 2019, while he has also pleaded not guilty to alternative charges of manslaughter and committing a violent act causing death.

Jurors in the Northern Territory Supreme Court trial have heard that after Mr Walker stabbed Mr Rolfe in the shoulder with a pair of scissors, Mr Rolfe shot him once, then Mr Walker and Remote Sergeant Adam Eberl got into a struggle during which they ended up on the ground.

Crown Prosecutor Philip Strickland SC gave his closing address over Tuesday and Wednesday (8 and 9 March). He told jurors the central issue was whether Mr Rolfe was legally justified in firing the second and third shots.

He said the core of the Crown case was that Remote Sergeant Eberl had allegedly “effectively restrained” Mr Walker when on top of him on the ground and Mr Rolfe did not have “an honest belief” he had to fire the last two shots to protect himself.

Mr Strickland alleged Mr Rolfe made a “lie to justify the unjustifiable” when he claimed he thought he saw Mr Walker stab Remote Sergeant Eberl as well as that he feared for his partner’s life before firing the last shots.

“He was saying it because he knew he’d gone too far. He knew he had been too gung ho.”

He also said Mr Rolfe “completely failed to reassess the situation” when the struggle began between Mr Walker and his partner and didn’t give himself time to think about whether Mr Walker posed an imminent threat.

He told jurors they should consider the context of the incident. He said Mr Rolfe served in the army for five years, trained with an international security organisation in the US, trained with the NT Police, and deployed 10 times with the immediate response team (IRT) – which arrested high-risk targets – before the shooting.

Mr Strickland suggested Mr Rolfe would have known better than most “when and how to deploy his firearm – even in a split second”.

He alleged after the IRT were called to Yuendumu, Mr Rolfe paid no attention to the preference of the officer in charge of the community’s police station, Sergeant Julie Frost, to arrest Mr Walker early in the morning of 10 November, which was the day after a funeral in the community.

“His only mission, in his mind, was to arrest Kumanjayi Walker immediately,” he alleged.

He also alleged Mr Rolfe’s state of mind was that if Mr Walker showed any resistance or presented with a weapon, he was prepared to draw his gun and fire it if necessary. In Mr Rolfe’s mind, Mr Strickland said, “Kumanjayi Walker was an extremely violent man”.

Mr Strickland accepted Mr Walker stabbed Mr Rolfe in the shoulder, so he said it was possible Mr Rolfe fired the first shot to defend himself. He added the cut to the shoulder was “undoubtedly, a superficial wound”.

He said due to the way Remote Sergeant Eberl was holding Mr Walker when they were struggling, it was not possible for the latter to stab the sergeant in the chest or neck area with the scissors.

Remote Sergeant Eberl had also said he did not see or feel whether Mr Walker struck him with a pointy object during the struggle, as well as he thought Mr Walker’s right arm, which held the scissors, had been underneath his body.

Mr Strickland told jurors they could find Mr Rolfe intentionally shot Mr Walker three times, that the second and third shots caused his death, and he intended to either kill him or cause him serious harm.

He said when Mr Rolfe testified, he was asked if he knew quickly firing two shots 5 cm away from Mr Walker at an area containing his lungs and heart would likely kill him.

“I knew it would likely cause death or serious harm,” Mr Rolfe said.

However, when Mr Strickland had earlier asked whether Mr Rolfe thought shooting Mr Walker like that would “probably kill him”, Mr Rolfe replied, “no”.

“But you think it would probably cause him serious harm?” Mr Strickland asked.

“I wasn’t thinking that at the time,” Mr Rolfe replied.